About the solo play style which has emerged on some servers

i just spawned to two fertile woman on eu-2 in the same town. they do not want me as their child. and i hate being forced into making the marathon to finally find someone who wants to play. its 1 min waiting here and 1 min waiting there till you die and can finally gettin born again - its annoying. so i guess it would help everyone to have an on/off switch fertile/infertile for solo player. so they can play alone as an hermit.

Why solo eve eve like to build buildings in eu2? I think because there are not too much people play this game. They are so broing, so they build a buildings in their server. After they have fininshed a town, they do not want to see their buildings are destroied.
Indeed, there are less than 50 people online in same time in all servers. 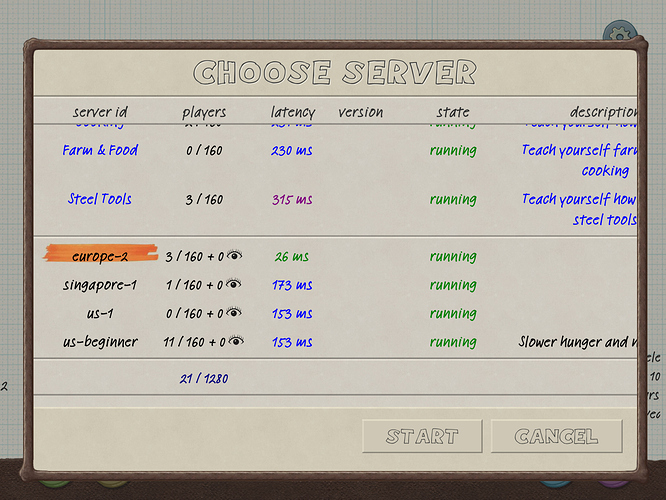 Its not that we are bored, we just like making big towns and builds, and we don’t wan’t people destroying our town. Growing up all babies takes time and food, but of course we can try this new update. If something goes wrong, we can always banish or kill the player.

First , you asked players to give their opinions, and we tried our best to say the advantages and disadvantages of this rule responsibly.
Second, the server is not modified because of big changes. If the game is updated, we will not blame innocent people at will. As a part of the game, we have a certain right to put forward our own opinions, right?

I used to be one of the people that “blocked” others from the eu2 server because we had a couple group towns there.
I didnt raised any baby’s because i didnt want randoms to destroy “my town” while at the same time a random eve could just spawn in my dead town when i was offline and played and raised baby’s there, probably even had a good time.
In the end my town Eden never got griefed but dissapeared overnight due to a server update so its not gonna last forever anyway, thats why i dont get why some say i put a lot of hours in this…?? Yes we all do, but nothing lasts forever and its not actually yours.
We have been asking for private servers a very long time and we finally got them, i thought that we finally had a solution here.
If you want to play solo or griefer free you pay a litlle extra and you get a server but now i see people still building their own towns instead of playing toghether.
My opinion is if you on a open server its got to be accesable for everyone in any town they get born in.
Like christoffer said its a family survival game, you do your litlle part in society and pass it on to the next generations.
I think the game is mainly meant to played like this and alternatives like solo or group play are the private servers for.

I think you forgot but eden was griefed. It was griefed multiple times its just we kept fixing it. It just wasnt griefed as bad some of our other towns. But Eden was griefed especially in the week or two before the hardrive crashed and the server got reset. Someone had choped down the birthday tree and killed all of the animals. They broke my fence and let out all of the wild horses id been collecting to tame. And choped down all the nearby trees. This was before you could use wood shavings to make fire so it was really destructive since we had to go 6 minutes just to get juniper for the fire.

I could not agree more. Private city, build on a private server. I have my own nice city on my private server. I go to public servers to play with others and most the time nobody will even let you live unless you go on the beginner server.

I would personally like to see negetive consequences for babies being neglected and starved. Like what has been said, this is a game about survival and cooperation with others. The good people outnumber griefers. Cut trees can be re planted. Sheep can be re caught. What is not replaceable? Hours of work maybe but It’s a game, not a career investment.

So you mean I deserve to spend hours cleaning up my broken home?

I contributed my efforts to my family. I was very willing to accept my children at first, but my family was in danger. Is that the punishment I should receive? Did I do anything wrong? Who can tell me?I want to take care of my beautiful home and my children. Is that what I did wrong?

Because you haven’t experienced it personally, you can’t understand how painful it is. Maybe you are shocked to see the picture of the whole picture backpack I sent out. What’s more, I watched my backpack slowly deteriorate and disappear. Can I send out the picture calmly, and my heart really does not fluctuate? ?

You don’t know the hardships of the organizer, so you can make such irresponsible remarks. That’s your right lol.

Respectfully, is not a hardship to have to fix something on a game, in my humble opinion. At the end of the day, this is just a game.I did not say you deserve anything, one way or the other. I’m sorry you feel so hurt about someone messing up something but I still feel like hoarding private towns messes up gameplay for others, so it is just as bad as the griefers because it sours the experience of others to have to be reborn dozens of times before someone will let them live. I am just as entitled to my opinion as you are. If you build your town in a private server and nobody can touch it. Public servers are public servers.

Yes, I have never experienced what you experienced because I built my city in a private server, as the game intended. I am confused though… Don’t backpacks deteriorate on their own? Mine always do. That is not the work of a griefer, that is just how the game is.

I’m sorry, I apologize to you for my disrespectful tone just now. It’s my impulse. These backpacks were “prepared” for me by my children, not by myself. I didn’t even want to make one backpack in my home…

A game not a career exactly. So we play however we want cause there is not a right way to play the game. Even griefing is part of the game.Playing on public server, we take the risks of being griefed or the map being wiped, but it’s still our choice whether to raise kids or whom we play with.
About private server, I have a friends server, but I still play solo on eu2. I’ve met people there and I know most of the roads and developed towns. I’m not giving that up until the server is wiped clean.

Yeah, play however you want. It’s everyone’s right, I’m just saying I would like to see incentives/consequences for either raising or not raising your kids because cooperation and team play is the actual purpose of the game. until then people will do what they do. There are things I like and things others like. Yeah, sure griefing is part of the game too I guess and I would say town hoarders are another form of griefers because they sour gameplay for others. It’s cool though, I spend 90% of my time in this game on my solo server.

You do you. I think we can agree that encouraging people to play together doesn’t mean eliminating other play style.

I can agree. I may disagree with some on how that can be accomplished lol but it’s not my game and I am not anyone’s daddy here to tell them what to do. Bottom line we are all here to have fun. Hopefully only a very small majority are here to cause destruction. Let’s see what the developers do in the future. I am excited for how this game might further improve.

They made private servers for solo players. In here: About the solo play style which was ebmerged on some servers. The public servers are going to be for people who wan’t to keep their childs. (Sorry, made this comment on the wrong post

Solo play should be reserved for private server, I have my own private sever with nice town. Don’t be cheap and pay the $2 and quit crying about your pathetic little towns. Geez