About the new decay mechanism

@Christoffer
I have purchased and maintained private servers from the beginning.
It’s sad that a building built over several days breaks in just one day.
That’s why people who cherished this game for a year might hate it and leave.

Things that humans deal with every day do not collapse in just one day.
We want you to set to the same setting as resetting a map that is not standing.

Please keep the setting as same as unvisited map. 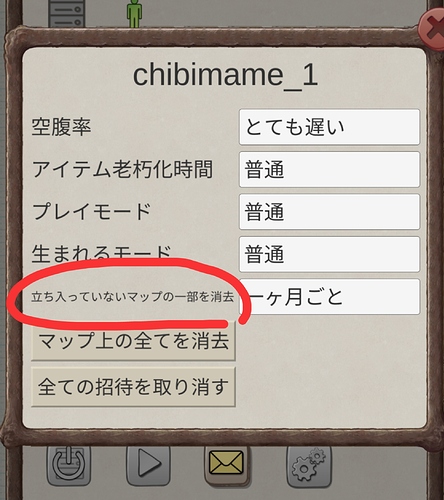 Thanks for the feedback. First some data about the current decay rate:
A stone wall now turns into Ancient stone wall slower than before. The expected average (EA) is 24 hours.

So the total EA for a Stone Wall to decay is 7 days. This is 10,000 years in game time.
The decay is happening randomly though. For every quarter of an EA time, there is a 25% chance that a wall decays one step. This means that the decay can happen either faster or slower than the EA, for individual tiles.

Now your specific question:
If you set the Decay factor on your private server to be slower, the EA will increase with that factor. Is this not enough to achieve what you are looking for? Could you tell me why you think it’s better to use the map clean-up parameter instead of the decay parameter?

Thank you for your reply. 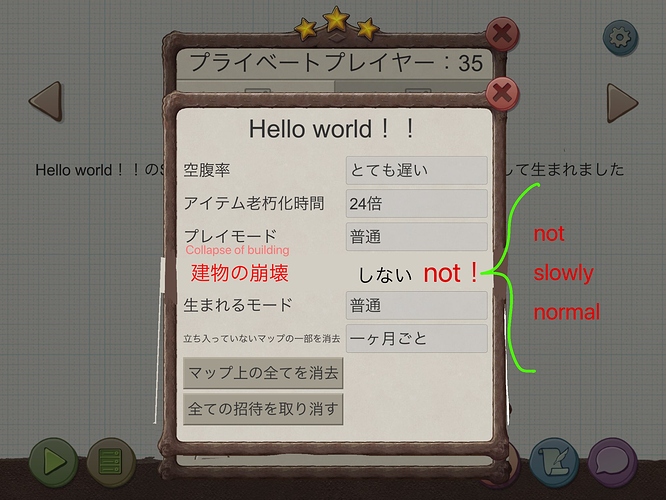 Ok, I understand. It’s not unreasonable to imagine a setting for that. We will consider it.

Thank you for your consideration.

@sweetazuki
I am thinking about this idea now. I need to understand if there are other ways to achieve the effect you are looking for. Here is why:

The mechanism of decaying using a probability function instead of a fixed time, is something we want to use for many more items in the game. For example: Rabbit holes and bear caves that have become empty today have a fixed time to become populated again. It would be an improvement to let that depend on a probability instead.

Code-wise, there isn’t anything called “Collapse of Building”. It is just that the stone walls now use the new decay function. If we introduced a new setting which would turn off that function, rabbit holes and bear caves and other things would also stop repopulating.

Question: Since there is already a setting for making decay take longer time on private servers, is it ok for you to use that function instead? If not, could you please explain the details of why that is not a good idea? The answer might give inspiration for new ideas. Thanks!

Hmm
That is the specification. I understand. The collapse of the stone wall cannot be stopped …

I think that ancient ruins are wonderful if it is a normal server.
If you are traveling and find an old castle that someone made, you will be thrilled.

But the private server is managed by the master.
There you will build a zoo, build a castle, and invite your friends to play.
They love the design of the stone walls and make them based on the assumption that they will not break.
What you need is not an old castle made by someone you don’t know. A castle made by Master. I don’t want it to collapse.

A proposal.
Clay walls can be escaped from collapse by painting.
Is it possible to process something on the stone wall?
How about adding cement to your craft?
I saw this proposal in the forum before (I’ve looked for it now but I can’t find it).

I want to protect the castle that I did not make on the premise that it will collapse, rather than solve it by slowing down.

I agree that that would be a good solution. Currently the walls are just stones stacked on top of each other so it would make sense for a perminant version to be made by adding some kind of mortar to hold it together.

Thank you.
This is a friend’s private server.
It is sad that the castle that is beautifully made and kept is broken.
Please consider. 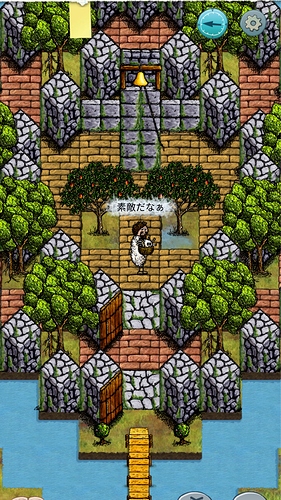 I agree that that would be a good solution.

A building that wasn’t built because it was going to break was broken in private Server.

If there are many applicants, is there a possibility that the time will go back as in the previous correction?

@sweetazuki
Thanks for the answers. Here is my current thinking on what would be the best solution then:

The list could contain the fresh stone walls (without the green), as well as adobe walls. It could also contain things like the peace lily monument. One needs to be careful to put in object that have no other means of removal than decay though, so maybe the peace lily monument is not a great idea after all. Similarly, the ancient walls are not good because they can’t be removed, but the non-ancient walls would work.

I need to find out if this is feasible for us to do, but first I’d like your feedback on if it sounds like a good solution?
Also, could you help me compile a list of what objects you would like to consider “buildings”, which shouldn’t decay?

Thank you for your polite answer.
Is my perception correct that the ancient walls will collapse but the new stone walls will not fade?

Wow! If this setting can be made for each building, the problem will be solved.

Of course!
I want to cooperate with my friends for improvement.
Thank you.

Is my perception correct that the ancient walls will collapse but the new stone walls will not fade?

Yes, that’s what I am thinking.

Wow! If this setting can be made for each building, the problem will be solved.

The list we create needs to be a good one for all players, because individual players could not have their own lists. We could have more than one to choose from though, for example like this:

Does this make it more clear?

If you have a lot of requests, can you consider returning the time to the state before the update?

Yes. My writing was not good.
There is no setting in a small range to set for each building, and it applies to all the same craft inside the server.
I recognize it as an east-west stone wall, north-south, corner.

What you are proposing,
Before, all private servers were stopped and restored
I think it was a remedy for a base reset that was not intended by the management.

This time, there will be a notice in advance that the stone wall will collapse, and I think that the same measure may be difficult because it is an update that was intended by the management.

It’s very disappointing because we haven’t made crafts with that intention from the beginning.
I think that the solution is to repair the broken part and set it not to collapse this time.

I see!
Thank you for your reply
I am convinced

We started working on this solution. Hopefully we can get it ready in time before the Christmas release.