Today he has posted the first new content since the first aid station (also I think that given the tricky controls of mobile that time to death should be increased to allow for successful healing!)

Guessing this will be a good guide to see how long it would take to port across the new updates to mobile. Any ideas of the time frame?

Yes, we were also sorting out lag issues, and guess what? We were able to find the cause and let Jason know about it: 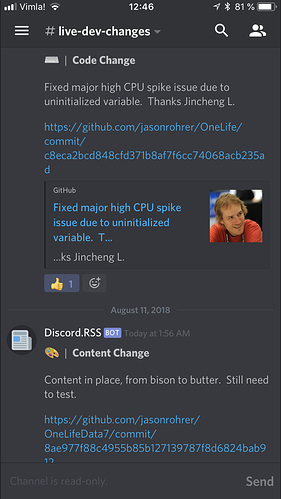 image750×1334 206 KB
By playing on our servers, you guys helped us find and fix this issue, which also was a problem for the PC version, so thanks for that!

Regarding Bison & Butter, we should be able to make a new build on Monday, I’m thinking.

Concerning buttered knives. I have been reading through the main Forum for pc and they have been having griefing issues with this. When a buttered knife is used for murder it does not turn bloody and they can immediately murder again. Just a warning to watch out with the new update.

Yes, that was causing quite some havoc on the PC world. It has been fixed now though; buttered knives can’t kill any more.

Yea, told me about it. I was kill this sunday with a buttered knife on the PC.