Christoffer. Two new ideas about you

Oh! Dear Chrisoffer
​I can’t believe I accepted the mechanism,But you said that you want to join two new ideas, let me very disagree.I seriously doubt if you haven’t played this game and your brain has been kicked by the donkey?
​If there is cooling time for killing sheep,There is cooling time for pulling out the branches.How do I cook?How to put the shovel on the handle？Don’t think of things as simple as possible?
​I ca n’t understand your thoughts on changing the game mechanics, and I hope you can take the time to play this game.
I have been playing this game for ten months, and I hope that there won’t be too many changes, it is already great now.
​I love this game, I love these friends
I hope you don’t change the cooldown time. Except for the cooldown of the killing, everything else is nonsense.
Hope you can give me a reply, thank you.
​ 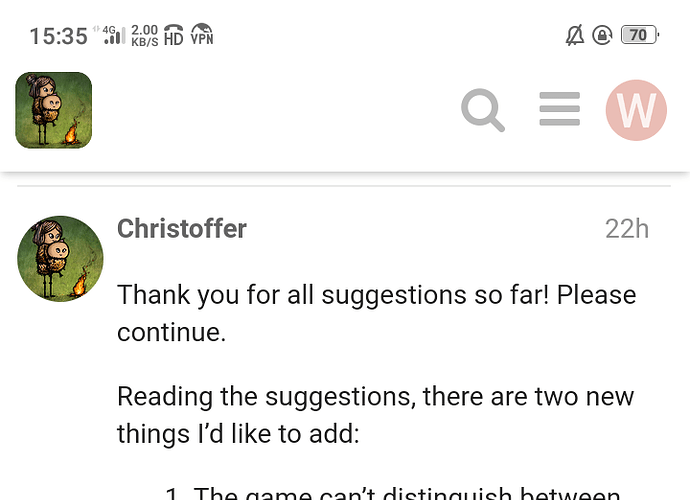 If you are worried about the vandals killing sheep, I don’t think you need to limit the time in the beginning, you can limit the number of sheep killed. At a certain amount, time limit.
Do you think it’s ok? I hope I can get a reply. Thank you

I think you have misunderstood some details. No-one has suggested cool down time for picking branches. It was about cutting down the trees you get the long branches from.

Also, there is no problem for your cooking. It would work like this:

I don’t see the future of this game. It has no hope. This game should not be called: you are hope. Should be called: Christoffer’s ideal country.Other games are all made easy for players to play games happily.And you are trying to drag the player down.
I really want to open your head and see what you think.Have you lived in fairy tales since childhood?
What you do now is wrong and annoying. You like people who conform to you and flatter you,。And your eyes are completely blinded by them.We really love this game and make suggestions to make it better and better.You don’t believe us. You do not accept our suggestion
I really do not understand. A sheep has only four pieces of meat.Killing sheep also needs time to cool down. You know how big a large family is？We will eat a lot of food in my life. You set the time to cool down.If my family had eaten up gooseberries.When lamb is not available.We will all die.！！You would say that everyone came to kill the sheep, but you must know that many people would rather starve to death than work.！！
Kill a sheep and cook once, have you ever wondered how much firewood is wasted like this. No matter how much, it will always be used up.Don’t you find it very troublesome?Could you please play more games and come out to talk.Talking to you as if talking to chickens and ducks. Can’t understand what you’re talking about.Please go to play the game alone, and don’t anyone help you.So you can understand what I say.I believe most of these players are adults. Your thoughts make me think you are still a child.
​I said a lot, and it wasn’t very nice. I hope you can understand my anger. Thank you:咯咯笑脸:

Im assuming the sheep cull cool down would be realativly short. Lets say 30 seconds to a minute.

Thats about enough time to take a knife from your backpack cull a single sheep, put the knife on the ground, put the meat in your bag. Run to kitchen place the meat and be back in time to cull another sheep.

Sounds like normal gameplay to me. Just rearanging the order slightly since i normally cull all my sheep at once and then transport the meat to the oven area but it would be the same number of trips and time spent roughly. Especially if your preping the plates for the pies as you do so.

I think their misunderstanding was in that they believe that the cooldown would prevent them from making any actions at all besides moving maybe. So they would have to wait for the cool down to wear off to do the very next action in the process.

They might also have been thinking that all actions would have a cooldown. Like cuting a skewer. Firing the oven. Placing dough on plates.

But im not sure since im not a psychic lmao

I don’t misunderstand at least.
When mounting, it’ll be necessary to be familiar.A stress would be felt until I’m used to making lay.
And I think this plan won’t be a fundamental solution.
A detailed thing was written on this, so it’s omitted.
https://forum.onehouronelife.app/t/help-us-make-griefing-harder-to-do/5981/59?u=mia.a

Is it a bad thing to give an advice to make the play comfortable?
I thought seriously about a game.The person who approves me will be same, too.There is also such forum.
https://forum.onehouronelife.app/t/suggestion-of-how-to-make-griefing-harder-to-do/5997/16
When that’s a bad thing.When you don’t understand at all.When only the opinion which approves itself is necessary.I won’t write in a forum any more.
I’m very sad.

Oh my god. There may be a difference in gameplay between us, and a gap in strength. Trust my hand speed.

What you do now is wrong and annoying.

I do a lot of things, and I write several posts about various things. Please specifically say what is wrong and annoying, in detail, thank you. If you have the time to write a complaint, then it would be great if you had time to make it clear what you complain about and avoid misunderstandings.

We really love this game and make suggestions to make it better and better.You don’t believe us. You do not accept our suggestion

Some of those suggestions become reality, and some don’t. It can’t be any other way. People are working hard, making that game that you love. Their time is not infinite.

Other people then you are also making suggestions or complaining about annoying things. The one thing most people complain about is Griefers. Why is it not okay that I listen to those complaints and try to come up with solutions? Is it only ok to listen to suggestions that you like? Take a look at what people say about these things: some are against it, like you, while some are interested in the ideas and want to try them. Are those people also “chicken”, “ducks”, and “children” living in a “fairy tale” to you? Is it reasonable to use those words just because you disagree about something?

​I said a lot, and it wasn’t very nice. I hope you can understand my anger. Thank you:咯咯笑脸:

You ask for understanding, but I think that should go both ways. Isn’t that reasonable?