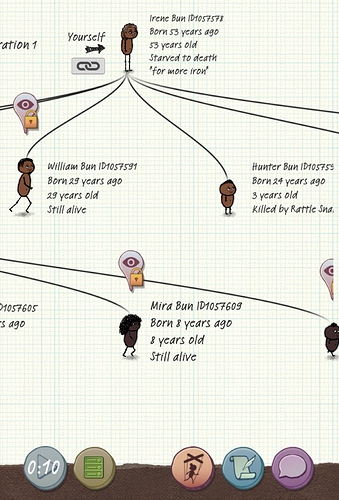 Screenshot_20200614_0136481080×1592 595 KB
Idk if this is really a bug, but I just played a round and as u can see I aged 53 years as an eve, so I’m clearly not a suicide baby. I even forced all the runners to stay until they were 3, so I didn’t abandon a single child. When I turned 53 my connection went bye-bye and I had to restart the game, just in time to see myself starve. No idea if it was my internet or whatever, everything worked fine afterwards, but when I got to my family tree there was a cooldown on my next round (nothing too long, 30 secs or so, but since these cooldowns can stack I wanted to share this here).
3 Likes
Maengish June 13, 2020, 11:52pm #2

it seems like the system began a new countdown with the rejoining.
i think the rejoining and then dying was counted as a too short lifetime.
seems like a bug to me.

Did you have to restart twice? I think you have to die three times as a baby before it gives the first cooldown normally so im thinking it counted restarting the app as a “death” and then actually dying within three minutes of loading back in counted it as a baby death…

It’s like I said in my post, lived a normal life until my connection forced me to close the app. I dis- and reconnected my wifi, cause that sometimes helps then I opened the app again, saw that I was still alive and hopped back in, because I was making a saw for my kinda new kids. However, when I hopped back in I instantly starved.
Whatever the devs use to determine the length of your life before you die, they should use the age of your character as well.
I also got a cooldown later, when I suicided as an eve on a low population server. Wanted to help the other 2 players out and tried to get into their family.

I agree with Heidi that this sounds like a bug, or at least a situation that is not being handled as well as it should be. I can’t promise that we will address this now though, since we are looking at potentially getting rid of the cool down completely, and instead launch other methods to avoid reset marathons. We shall see…

This happened to me just now. It was my first life for the day, I lost connection when I got back in I had to wait 20 seconds… Luckily my food bar was full