I don’t want people to vent about a greifer on this topic, please give ideas/constructive criticism. If you have to mention a greifer, please give it as a scenario. For example “What if they decided to burn all of my kindling on the ground, and I’m the only one there?” And explain how cursing could work/not work in that scenario.

As some have already said on the forum, cursing is not working/broken. I personally don’t think it’s broken but there’s no way for me to keep track of it so idk on that part. I don’t think it’s working though. It’s demotivating to think that.

Cursing in it’s current state is like a good idea on paper, but not in practice. It only works when a group of people who speak the same language all have their own curses ready and can all identify the greifer. That sounds good, but it’s pretty specific circumstances especially considering theres a chance the greifer will live after the curses. They could’ve easily hidden all of the weapons and start ruining everything in an open village quickly. Even worse they could be the only one with a knife. Either case, no one can do anything until that greifer is killed. If the arrow disappearing when fired from a bow glitch is fixed, then that’s a viable option. Otherwise without a knife you have to deal with the abuse.

Griefing is hell on early game smithys/villages especially. What if they hid all of the tools behind trees? There is no way to find all of those tools quickly unless you check every square behind every tree. Cursing isn’t useful here if you don’t know who did it. That’s why it’s so important to curse a greifer when they’re caught.

My idea is that cursing becomes more powerful. The only times I have been cursed is by greifers themselves. That’s only about once a day. Since I’m active, it really dosnt affect me. Even if it gets more powerful I’ll be fine. I don’t think the cool down should be shorter to curse though, in fact I think it should twice as long but four times more punishing. Maybe even have a mechanic where the longer you play the stronger your curses/they build up.

I also think that it should be easier to target someone with a bow and arrow. I have to get lucky to shoot them, r.i.p. to anyone who uses a shorter screen than far.

I think I witnessed this happen. You was in milkweed family. A little east of the main town you was setting up to smith. I cursed the griefer for you.

That is true, thank you for that. 2 curses only amounts to 2 hours though. It really dosnt do anything. After that they took all of my tools and flatstone then hid them behind trees. 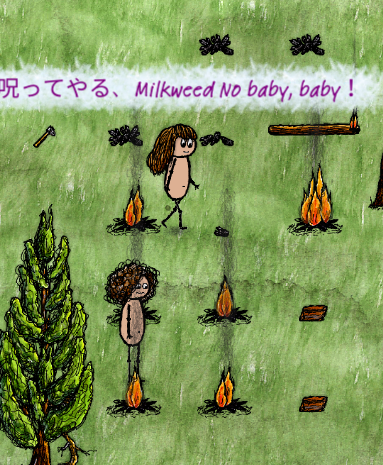 Well hey I just thought more about it. What if your curse builds up, then it eventually turns into a smite after a long while. You use the built up curse on them and kill them instantly. I think that’d be pretty cool.

hen it eventually turns into a smite after a long while

Nobody in this game should have the ability to hold that much power. You see most griefers are expert players. And are capable of being a model citizen for hours. If all you have to do is play nice for a couple hours and you would gain the ability to smite someone to donkey town. As an experienced griefer I will tell you how that is a bad idea. Imagine you curse a murderer or thief. Then the griefer comes back and smites you. If the game gives you a weapon weather ingame of in code. I would go out of my way to acquire it and then use it when someone least expects it.

I remember stumbling up on the ember piles and you was chasing someone with an arrow. I was confused, though he was making a lil knife factory to grief or something. I took and used the iron eventually, I thought u abandoned it. Sorry…

@LavishFox
I know that a griefer could use it against you as well, but I’ve seen a griefer get cursed more than griefers cursing people, even if it is just one more person. Right now cursing has no weight to it.

Maybe to counter-act the “instant death” bit, it should strike them with lightning after 30 sec to give a person smited a chance to smite back. The point is to punish people who deserve it. Not give them a light tap on the wrist. Besides, if this inspires griefers to be model citizens who work and play nice, then dosnt that mean it would work?

Im not saying a smite should just be a “few hours” but im saying it should be like 5 hours (4 hours of building 4 hours of curse, then 1 hour individually for smite). Sending a person to donkey ville instantly is unfair, so it shouldn’t be possible to end up in donkeyville with just 2-3 peoples curses. It should take a curse build up of 20 hours to end up in donkeyville for those full 20 hours.

This way griefers would have to have 5 seperate people be born in the same area to smite the same person 5 times in one life in order to send them to donkeyville in order to actually abuse it. Since there are far more normal people playing the game I’d say 5 normal people cursing one griefer is far more common than seperate greifers existing and cursing at once. This way we will actually see how far people are willing to waste their time in order to “grief”. When did griefing become something people proudly admit to?

Its all good, im just gonna be skipping out on this event.

Well if you think about the whole story. Whether you’re a greifer or an upstanding citizen. Everyone who plays this game had to pay for it. We are limited in what can actually be done about bad players. We can’t straight up ban them. The devs of this game and Jason both are completely aware of this. We could simply make their life uncomfortable. You see not all greifers are bad as I addressed here before: https://forum.onehouronelife.app/t/topic/2364/14?u=lavishfox . Sometimes they are retaliating against an actual greifer.

So I present an alternative: If someone is cursed enough. They will spawn as an eve in a maze instead of donkey town. In this maze they will have to complete a task related to actual gameplay to advance to the next room. Similar to how the tutorial works. The more curse points a person aquires the deeper into the maze they will spawn. There would be no timer on the curse points. In order to return to normal servers they MUST complete the maze. This way the person is forced to be productive and learn something.

As much as we are limited in what we can do about bad players, we are also extremely limited in what we can do playing with bad players. Why would one person who strictly plays the game to ruin it for others matter when they could deter more people from buying the game in the first place? If there’s bad people that are enabled, it will create more bad people that want to stay here too.

A forced productive play style would be good. I think it would be hard to create though. I like the idea of a maze. I’ll message you my thoughts on that other stuff.

Cursing is working. It is a “fix” that Jason was reluctant to add. Even recently he was musing as to whether Donkey Town had taken some of the excitement out of the game.

The hardcore griefers aren’t affecting the gameplay as they were before on the pc version. Are there still griefers? Yep. Some people are part time or sometimes griefers. And here I’ll loosely quote Pein, from the pc forums… any civ that isn’t prepared to deal with a griefer doesn’t deserve to survive.

I’ve seen far too many people walk idly by after a griefer has been stopped in their tracks without cursing them. That tells me one of two things. Either they don’t care or they used their curse on something trivial and can’t curse.

I consider a curse to be something akin to a vote as a juror. The curse system, if used properly IS effective. It’s just not being used properly. The only thing that needs to change is how the players exercise that “vote” and for them to wise up and use it ONLY for the most serious offenses.

For me personally, all civs have been prepared for a griefer. When it comes to actually killing a griefer it takes anywhere from 15-25 minutes though. A jurors vote is permanent and dosnt last just an hour. This is why im for curses with a longer charge up time and an even stronger effect. So people don’t waste it on something small easily, and learn to value curses. As well as giving someone time to curse back or think about their actions for 30 seconds before a smite.

Yeah, but people should be valuing their curses now. It takes long enough to gain a curse token as it is. No one should be wasting them on frivolities. Donkey town is like “jail”. And, as in real life, we will see some rate of recidivism and some rehabilitation.

You must be very lucky in all the civs you’ve played if they were prepared for a griefer. I just came from playing Burdock and they were pretty much asking to be griefed… I found five knives, three hidden in a basket and two laying loose. I saw no less than six others in backpacks and, again, later, two more just laying around. An oiled file and blank blades everywhere. Is a well armed society a safer society? Perhaps, but when you leave knives just laying around…

Smiting people? Ummmm… I vote no.

Oh funny thing, I’ve actually spectated a person who was griefing during an event before. What they do is make a bunch of short shafts, then keep making the blank blades at a forge all into blades, then make them all into knifes. So odds are there was only one person who made a knife to actually use, the rest is a griefer.

So in a way the griefer did something that could help a civilization in the future?

Yeah, sure. They helped to make enough knifes to last the village a month after the event ends. Sure, yeah.

So I guess we just need “cops” right? I’ve done this before. Worked pretty well, walked around with a weapon checking people out to make sure nothing crazy was going on. If someone was cursed I would run over there. Then look at the situation.

If it was petty or lies I’d just watch them for a little while.

Only did it for 1 life but there didn’t seem to be any issues. My next spawn in the village was wrecked.