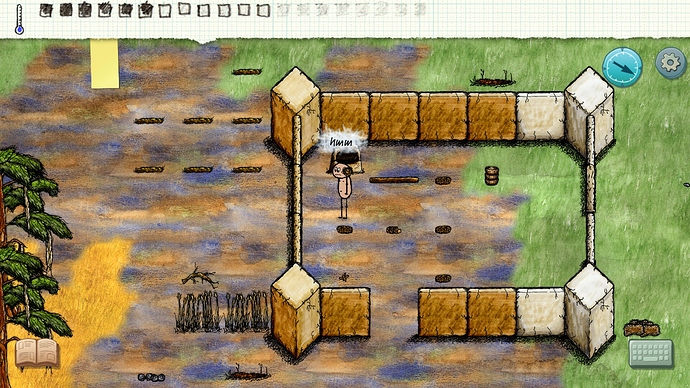 S90316-0730041920×1080 1.08 MB
It’s an early village so we don’t have much iron (i manage to collect 7 iron wrought myself and we need at least 13 iron wrought to makes all kinds of tool.) It better to save what we have and use it at it best. You are allowed to make a graveyard but please only do this when there’s a lot of iron in town. Geez… I see so many newbie use the shovel to dig grave. And we broke the shovel much faster than we make well or dig the soil.

I once smithing a shovel and it only took 3 minutes for them to broken it!!!

Maybe their mother wanted to be buried.

@WumboJumbo and @Kking have to stop this argument in public. Go and private message between both of you.

I’m fine with that reason. They might be special person to them. But there’s a player who buried every corpse in the graveyard. It’s okay IF we have a lot of iron. But we have not much iron since it was a new village. We only have 7 iron and we need 13 to makes all kinds of tool then we can go mining to collect more iron.

I understand what you mean. I will be pissed of knowing the village have no soil, no water , no steel and the showel is broken while having soil pit, enough stones for well . Really… maybe we should stop having graves cause … really we could always throw bones really far away so that we wouldn’t see it. Unless you are going to build a grave , put the stone, mark it , put the rose or paper as memorial, don’t build 1 . It is not worth it plus… without the stone , they will disappear, no memorial , no meaning .

Saying about that , do you all get pissed off when people eat the carrots for the goat and soil and use it for pie too? I won’t be pissed off if i planted a lot of carrots or it was planted in the early stage for food source . But, to be eating the carrots for soil and goat is a big no no . There are other foods like berry and pie . Eat it .

do you all get pissed off when people eat the carrots for the goat and soil and use it for pie too?

I wouldn’t mind as long as we have seed. I more pissed when they took the last carrot that we left to become seed.

You are right . I will be super pissed off. It is not easy to find carrot seed. Usually I leave 1 farm one and plant all 7 seeds once they come out. I consider them more efficient than planting 2 at a time.

Burried grave is decay much faster than unburried. But if we put flat stone in it, it became semi-permanent (it will not decay and permanent until the stone is removed).

You are correct. It decays faster but 2 hours pass very fast in this game. For me , it is not worth it I guess.

True. I don’t buried corpse myself too. It’s easier to place them far from home and let the time do their job. But sometimes I buried a grave if they are special for me or they want me to Burried them.