End of the war 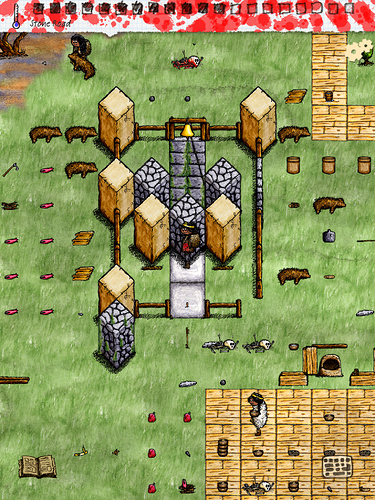 The difference an organized society makes.

Ill be back there tonight

Yes. Before randoms are griefers were there.

You mean my organization? I was the Eve there and have kept my spawn there for over a week

Yes ob0wie, your organization. You did alot there, many people did, its how we knew this could work with a little more structure. And it sucked to have it grieffed time and time again because of all the hard work put into it.

From the first day the code was implemented, I’ve been advocating for a way to not kill everyone. We figured out how to do that. If you want to continue holding grudges over what was done in order to figure out a system that’s your choice.

I have no grudges. I have no interest in having anything to do with anyone who is a part of the fellowship. You don’t understand what I mean. Better, meaning I figured out how to play the game the way it’s meant to be played. I’m not going to go along with whatever you and the fellowship have planned. That’s not the answer and it’s not going to work. Stop trying to control the game and everyone in it. It’s not possible.

Sounds like an interesting town. How do these Eve spawns work by the way? If I died of old age as an Eve could I then respawn nearby as another Eve even if I was reborn many hours later and there were plenty of other mothers on the server I could be reborn to?

From my understanding: If you die at 60 as an eve your next eve spawn should be in your town. If there are available mothers you will be born to them 1st. However currently the eve spawns are glitched and when you spawn as an eve it may be in some else’s town. This is currently being worked on.

We are waiting for this patch to go through before implementing our society so that other people can not spawn in our city and do with it what they like.

After 4 kills in this city i finally managed to build the road south to the monolith. you’re welcome «code family»

not even when you kill me 4 times you will get rid of my roads, muhahaha

Ps @Maengish that wasn’t us killing you 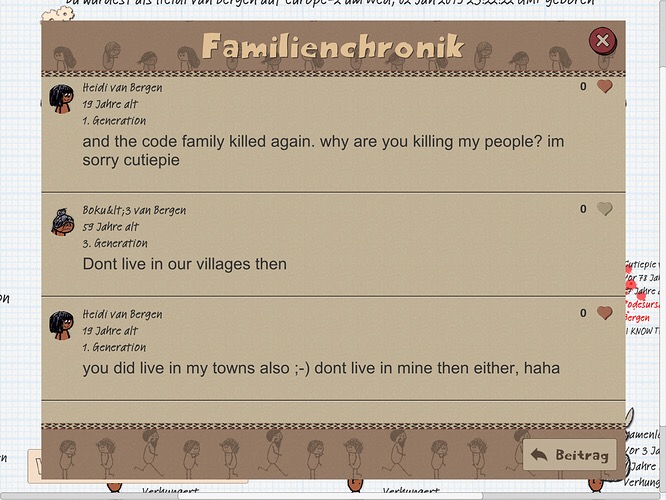 other village but same story. got killed by your people

Oh thats because other people are pretending to be us in order to make people hate us. We don’t kill randomly and only female babies are asked to respawn as boys.

Edit: anymore. We only killed all spawns for a couple days to figure some stuff out. And we have never gone into someone elses village and killed them

Lmao we only did that stuff for not even a week. Your all making it sound like we did it for a life time.

so you went from crimes against humanity to sterilization. maybe you should reconsider what it means to be in the code family and what you are doing. it seems you struggle with „figure some stuff out“.

We did it for a short period of time and are no longer doing it. It’s a game, we didn’t create actual genocide we just made spawns shitty in 1 family for a few hours. Sorry about that I know you were affected by it.

And yes we learned a lot from it. Come see for yourself in the discord. No one is required to stay.

thanks for your apology