After playing for a while I have a few comments to say:

I have a Android phone.

I get what you’re saying about the controls, honestly after you’ve been playing a couple days the controls are so much easier to use, Keep persevering with it, it definitely gets easier…

I don’t agree about the joystick and keys to move around, I think it would be overly complicated and take up too much of the screen…

The hardest thing in the game is controls, much more convenient if it was like a joystick to move and keys to actions

There will be a short tutorial in the full game release, where you get to try the controls out.
Joystick doesn’t fit the current internal logic of the game. Here you always move to a location (a tile), not in a direction.

We’re thinking of adding an option in the settings to limit the frame rate to 30fps. If you check it, the game will be a little less smooth, but you will save battery (and heat).

I am not sure what you mean, could you elaborate?

The game used 95 percent of my battery. I have an iphone 7 plus. I think a lower frame rate is a good idea 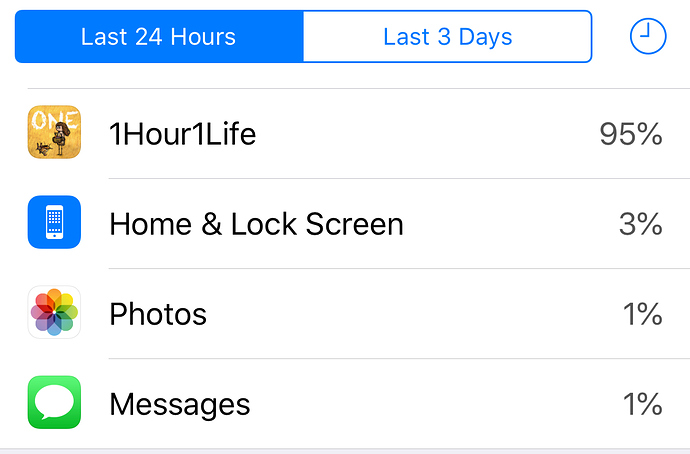 95% doesn’t really say much, if anything it says you played OHOL pretty much the entire day without doing anything else… how quickly did it drain from 100%?

I had my phone plugged in. But, I will time it next time and I’ll let you know how long it takes to drain my battery if it helps with anything at all

Well that percentage just shows how much it used in comparison to everything else, which depending on the time it took to drain completely, could actually be really high, or pretty average…
I can play the game on my iPhone and charge my phone at the same time, but it doesn’t charge as quickly as when I’m not playing…
Try charging your phone until it’s 100% close all your apps and everything off in the background and play for one hour, after that hour check your battery and how much is left, that should give a rough idea of how quickly one life can drain your battery