I had been helping around the berry farm, making pies, feeding my baby, etc. I spot a hat on the ground and pick it up, then suddenly have this chick demanding it. I drop hat, not aware it belonged to anyone. Another girl, whom earlier I had seen naming my sister’s baby then replying “lmao” when my sister tried to get her baby back, came up to me and said “gay”. I assumed she was joking around. Then she cursed me. This followed by another person cursing me, seeing me being cursed. I thought it was childish and tbh upset, so I decided to leave the village and suicide after making sure my baby was old enough to fend for himself. I then watched her through Observation, confused if she misread the situation or simply a enjoyed trolling people. I watched her pick up a knife and try to stab a man a couple times, unaware it was the beginner server. I guess she was bored with the place already and decided to suicide as well. I saw her pick up a baby and run off with two health bars left, trying to carry him into the wild, but luckily he was smart enough to know to run back to his mother. She again tried to fruitlessly stab someone before falling to starvation.

It’s not just the fact of this that worries me. I’ve been cursed for suiciding as a baby, in an attempt to make it back to my family. I don’t think it’s quite logical imo that a baby can’t curse anyone, yet they can be cursed. If you consider it, the reason stated for a baby not being able to curse is due to their lack of overall contribution at risk and not knowing what’s going down. Wouldn’t it be fair that a baby can’t be cursed for those same reasons? They can’t even pick up a knife/bow at that age. Nor would they have much ability to do harm, seeing as under three minutes you’re completely reliant on your mother or caregivier. I’ve been cursed as a baby in the past for being born as a boy when they had desired a girl, being told, “No, get the ■■■■ out” proceeded by a curse. I have been thinking over this for a bit of time now. To me, it only makes sense that since a baby can’t curse, you can’t curse a baby. What harm could they do? Be born the wrong gender? You can only form minimal words at that age, so I doubt most occasions are provoked (not saying it isn’t possible, anything is honestly). I don’t know. Maybe it sounds like a terrible idea. Or maybe another person sees where I’m coming from. I love this game so much, but trolls really suck the enjoyment out of a life. Is it just me, or is there more frequently griefing in the beginner server? Then again, that may mostly be due to a larger populous

I’ve been cursed as a baby in the past for being born as a boy when they had desired a girl, being told, “No, get the ■■■■ out” proceeded by a curse

Thats… horrible. I dont curse babies, I’d rather save my curses for more serious grievers. And I havent seen many people curse babies so I agree babies shouldnt be able to get cursed. But then theres the problem of suicide babies and no one knows how to stop that.

Is it just me, or are there more common attacks in the beginner server?

I think most beginners accidentally click on the button, or they dont know what that button does so they just click on it. I’ve been accidentally cursed many times now by beginners…

You’re not wrong. I was cursed by an Eve Mom just for being born yesterday and it wasn’t the beginner server. Trolls gonna troll. That being said, I agree with you.

Babies shouldn’t be able to curse since there was far too many curses being thrown down when babies could curse. It should also be impossible to curse anyone under three, particularly with the super easy peasy banishment to donkey town curse system in place right now.

I would agree. I can’t understand why anyone would squander their curse token to curse a baby, but since some people do, we could make babies immune to being cursed. I will look into it.
Thanks for the suggestion!

I’ve been cursed as a baby in the past

Gotta to admit that I curse a baby when I was a noob. Now that I realize what cursing is use for, now i consider save it to the real griever.
The real challenge is when there’s two griever at different lifespawn so i can’t curse anymore. It seems like cursing really wasn’t the best as they seems not afraid of it.

I also often met someone who curse random people and they said that “it was an accident”. No, they intend to curse you. They troller yet we can’t really curse them back as we didn’t have a perfect excuse to curse him.

Maybe we should curse whoever curse without solid reasons to remind them that cursing wasn’t a joke.

Once again, cursed as a baby TT even the lady was confused, hence “wtf”. Ironically, the man that cursed me was later cursed for running off with babies and trying to starve them. 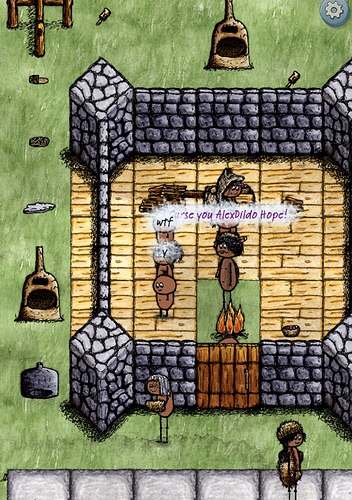 (yes, I’m aware my mother had given me a horrible name, aha)

I go to us beginner server and found a lot of kidnaper. Which is pretty odd because i never met them in Singapore server. Maybe all the griever is noob one.