How big berries farm should be?

I have a question.
How big should berries farm is?
Is this enough? 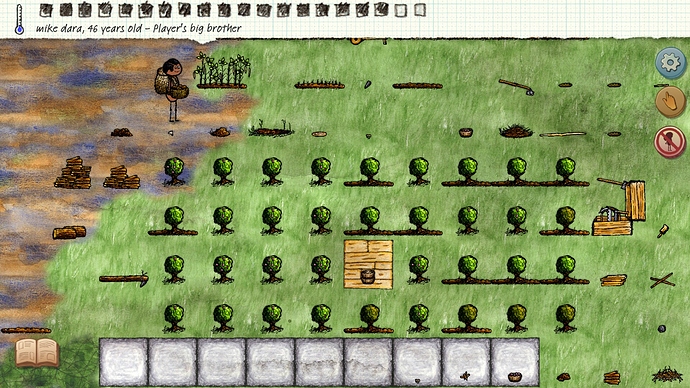 For the record, we play in Singapore server, the highest amount player that playing there is about 18-20. But most of the time is 8-15 people and the lowest is 4-6 people. So, i don’t think we need a big berries farm.

Usually, 3x3 farm is more than enough to fed 2 people. If we have other kind of foods like pies and stew, we don’t even need to touch the berries (except for making compose or add it to our pies).

The problem is, if the farm is too big, it need a lot of soil. The soil could be used in other corps (carrots or beans or milkweed).

How big is usually your berries farm is?

That berry farm is most certainly big enough.

2 3x3 should be plenty. But an ideal berry farm would be 4 3x3 berry farms with a well centered in between the four of them. Thats plenty of berries for all things like pies sheep food and compost. The design also leaves room for compost to be placed imbetween the sections.

You need to decide by looking at the people. In big towns with like 30 people it needs to be pretty big. 20 tiles maybe? Also get Some farmers. Last time i was getting kids and doing Some stuff, but whe had no berries. A lot of my kids died and i had to say sorry to a poor child…

Ah also it really doesnt matter how big the berry farm actually gets if you have compost and a stable water supply as long as there isnt any griefers or new players who dont understand that there are other foods to eat or dont really understand how much food berries restore. For example a new player who eats a berry every 1 to 2 food ticks instead of 4 or 5 hunger missing.

And of course the last berry thing where evryone complains about.

Yes its ridiculous. I know how it came about though. Its because around octoberish last year me and other players were going around telling players to always try to leave one berry on “Wild” bushes incase someone has gone to far without food and what not. So they have a higher chance of survival on the return trip. But i think someplayers misconmunicated it as all bushes and then new players learned it and now its just an odd and anoying thing lol.

berry farms should be 30x30 that way all of the noobs will know where the food is. hahaha

Two 3×3 is enough for toddlers (not counting the ones for sheep and compost) on the Japanese servers so it should be more than enough for low population servers. Toddlers could easily maintain it while waiting to grow up. There should be stew pots and a few bowls at every work station for adults, some pies would be good too. I think popcorn is ideal for toddlers too if you have enough bowls. They can hold it while running around figuring out the landscape, uses less soil for more food. It can easily be refilled with berries in the wilderness if needed. I don’t really care if noobs starve, they gotta learn the hard way or they will stay noobs for a long time. Don’t make a bad habit of eating berries.