Lessons that apply to reality

I’ve noticed a few things about this game that say something about the psychology of society. The main thing would be that the larger the community, the less responsibility people feel to keep it going. This compares to people in real life communities and the whole mob mentality issue. People in small communities are more likely to feel obligated to maintain their town than in major cities where everyone assumes someone else will do it. Finding a solution to this in-game could shed some light on ways we could address the issue IRL. Another thing, and this is kind of a leap, is mass shootings. In large communities, people are more likely to start grief killing. From what I’ve seen on the forums, a lot of people who do this are actually good players that just feel bored and feel that there is no job for them to take on to give their “life” meaning. They don’t want to work because nothing they do is going to be appreciated by the community as a whole. The real life term for this is alienation of labor and it’s a real issue that philosophers and sociologists have been trying to solve for a while. Obviously this doesn’t fully translate to real life mass murderers but I think that the idea that in large communities you feel less valuable to the whole and less connected to the other members of your community could teach us about the motives of real people who feel so disconnected from society that they don’t mind throwing their own life away to commit mass murder.

Alot of this is a stretch but I do think that it wouldn’t hurt to have real scientists observe games and gather data on how people act in this game. These are just some things I have noticed and I would like to hear what some of you have observed in the great social experiment.

Wow I never noticed that. I feel very stupid now.

I think that the biggest thing to help people maintain bushes in a town is if you just make a set of bowls,one for each bush. Then keep a stockpile of berries in the bowls and when it gets low pick the last of the berries off the bushes again to store and reset them. This way it reduces the amount of time a person has to watch them. Aswell making it less likely for these scenarios to happen. 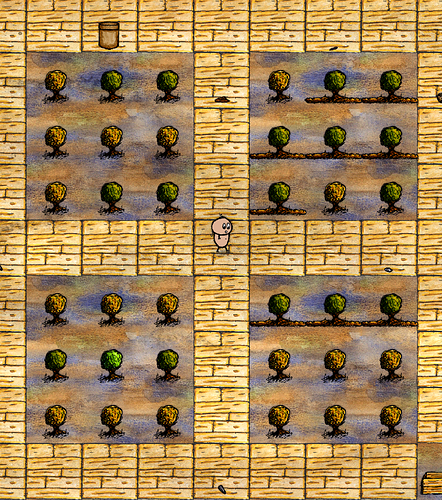 No, buy it like everyone else. Besides the mobile download is linked to your account and the pc version requires a unique code to play. The download by itself would be useless to you. But if you really want it the official github download is here: https://github.com/jasonrohrer/OneLifeData7

It not free lol , you can get free if you have a family share with your family on apple phone ,But only for family.

Mow the lawn for 5 dollers then ask a parent to buy this game for you.

Dude just look for change on the ground, in the couch, on the sidewalk, at school, etc then go buy a playstore giftcard. It’s 5$ and a lot of people work really hard to make this game. They deserve to be paid. Doesn’t matter how old you are stealing is stealing.

Based on the sense of entitlement I’m seeing here I don’t know how anxious I am to run into this “kid” in game. I can hear it now… I want a pony!!!

Nice idea!
Download the game from there for free, and she pays $ 5 a month as payment for Linux server. XD
She needs to install, update and maintain alone.

By the way, the server used by Mr.jason is Linode.
https://onehouronelife.com/forums/viewtopic.php?id=1081

This person can’t even come up with an idea to get $5. What makes you think they have the knowledge required to properly set up a linux server. I have years of experience with linux and it still took me about a week to get a server for this game fully online.

I’m sorry.
Even if her get the game for free, I wanted her to let her know that it costs more and more effort on other parts.
It think miraculous that “one hour one life for mobile” can play with $5.
Of course, I bought Mr. Jason’s game for $20.

I love this joke.
Anyway learning server’s operation is Most Effective Skill in this modern times.
My first programming is making MMORPG’s MOD server and now I’m Programmer.
I realy recommend this way to her. GL!!

Generally if you want people to keep working hard in big towns then the trick seems to be to use families. If you are a mother then raise your kids well, explaining the current state of the settlement and where their skills would be best needed so that the player feels they have a certain place in society. Also try to be encouraging and offer them someone to ask for help from later even if it’s only on a moral support basis. If you’re not a mother it’s even more effective to get an apprentice. Just find one craft and make it as efficient as possible (I did that with carts once. There were a lot of carts by the end) and then find yourself a kid who looks lost to teach it to. There’s nothing more fun than having an apprentice in Ohol, except maybe being one. If you want someone to feel that their labour is appreciated then don’t try and get society to solve it, the only reliable way in both real life and Ohol is to rely on your familiar connections to help you through. Although a nice village community also helps.

everyone assumes someone else will do it

Most of us is bored watering the bushes. That’s why they don’t keep the bushes alive. I rather makes pie for everyone to eat than watering all the bushes. Someone else can do it, not me. Yep.

So… are you teaching your kids to look after the bushes?

Nope. I want them to use their life as they want.

AHI DIDNT KNOW THAT!!!i can finally get my fiancée to play with me so he stops saying “it can’t be that hard to play”

Try a system where you get the kids and elderly to farm the bushes or other crops until they can do their own chosen trade or die. That way nobody actually has to be a boring farmer but everyone stays fed.