All of a sudden i am experiencing MAJOR lag (after the update i think) i have tried everything. Force stopped, clear data, clear cache, uninstalled reinstalled but still unplayable lag. I ran the server test and it says eveeyrhing is fine. Anyone know a fix?

Is that intermittent or constant?

We haven’t been able to see any lag problems. The server resides in a data center, so it’s not vulnerable to any problems with our office. There are of course any number of nodes on the way between a device and the server, so there’s always a chance that packets get lost. Please let us know if you continue to experience issues.

In the next version of the app, you will be able to see your ping time to our servers and select which server to play on (but there will not be a huge selection during beta).

The ping time is the time it takes for your device to send a message to the server and receive the response.

Will it have an active player count so you can pick the most populated server?

Please run the network test in Settings and send a screenshot. It might help us figure out what’s going on. 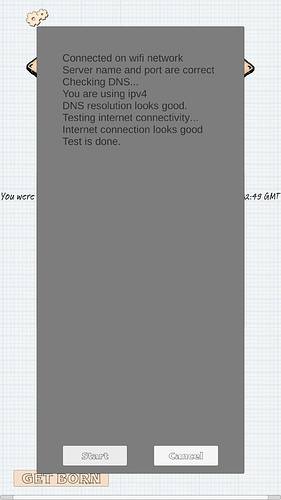 Thanks, Henry. Unfortunately nothing that jumps out immediately. May I ask what country you are in? The server is in Eastern US.

I am in new zealand

East US is not optimal for you then. We’re hoping to start one server in West US and one in Singapore together with the update next week. I think that will improve things for you.