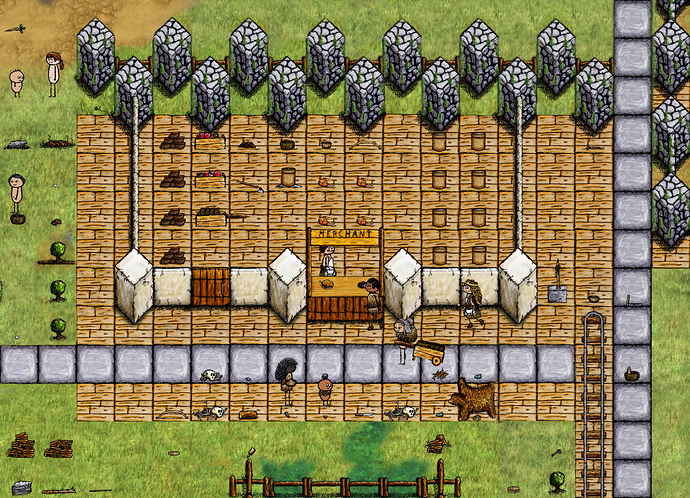 Merchant Update
It would be nice to have a counter to trade. You can put an item on one side on the counter. When both put something on the counter it will then switch the items. You can only pick the items of the other person up after the switch happend.

Wow, that looks realy nice! I tried making a money system but that wasnt a good idea for a small town, but this trading system is perfect. There isn’t a recipe on your suggestion though. Maybe you can add 2 piles of 2 boards, add 2 long straight shafts, and a rope? You can even add your own text with letters on the sign above it. But if you placed it wrong, you should be able to remove it. Maybe with a shovel, and then an axe? But you have to be fast though, otherwise you can’t remove it.

thanks for thinking of a recipe! that sound reasonable that we should be able to relocate it if its misplaced. but after an hour or two it should be permanent, so no burglars will break in

Maybe there has to be a 5 sec. delay. So it switches only when both leave the item on the counter for 5 sec. and then the deal is done.

Maybe a currency to go along with the idea? 50 steel coins for one steel ingot?

I dont think a complex currency would be good since we have to manually move them one coin at a time (imagine adding 50 coins to a pile then moving it or 60,70 etc.)
Maybe if there was a way to take 10 coins out at a time
And bills or more valuable coins like gold coins.