So with the increasing amount of posts regarding griefing and murderers I decided to post my response to a forum member I won’t name, whilst having a “debate” on why it is such an issue right now; as I feel it’s something that needs to be said.

“You’re right it is just a game, but right now it’s not.
Our job as beta testers is to test the game and try and play it as well as we can.
Now I assume you’re aware of the extremely large amount of content in this game, so far the beta testers haven’t even managed to test even 10% of the game, and you may ask yourself why that is?
Well that’s because of the lack of players, settlements aren’t surviving long enough for us to test the later game items, and when someone comes along and “just kills a few people” therefor breaking the cycle of rebirth, you then stop us from being able to do our jobs here properly.

This is not a free to play game, we have been given free access for one reason only, to test the game and make sure it works exactly how it should, and even better than people expected.
And we can’t do that if every single person isn’t working together, which like you, a lot of these newest testers just aren’t working with the rest of us.”

And I’m sure it would be delicious

May be off topic but…

If you really want us to test beta then perhaps turning off snakes/wolves/boars might be worthwhile. Early deaths due to running into one behind a tree can really set you back.

As it is I like playing what we have now - just hate having to eat so much!!!

Like I said this is just a game, but right now it is the beta test of a game, which means we don’t have the time to constantly be restarting from square one where we might not have had to, because someone decided they have nothing better to do with their time than go on a murderous rampage, and it’s a shame that we have people asking for the griefers to be banned so early on too.
Im gonna repeat myself for those in the back that don’t seem to read these posts thoroughly (or at all for a lot of these new people)

We have been given free access, to do our jobs, which WE signed up for, and obviously have a good time whilst we’re at it! Some of you on the other hand just see this beta as an open free for all to play the game as you would on PC, which is fair enough, just not during the beta!
Remember why it is we’ve been given this access and be grateful and appreciate it! There are still plenty of people waiting to get on the shortlist for any available spots in the beta… and I don’t think it’s fair that people that actually want to test the game and do the job they’re signing up for, can’t, because positions have been filled by people who to be frank, just don’t give a damn about the community that we as a group have tried to create this last month, or the job they agreed to do.

Hahaha this wouldn’t be the mobile OHOL forum if the thread DIDNT go off topic, don’t apologise it happens to almost every thread, (especially with the crazy pie guy) eventually if it gets too messy then christoffer will have a clean up and make things look nice and pretty again, I do like your suggestions, but for us to test the game properly we need to be able to play the game as intended, so we can make sure it plays, as intended, we’ve already had to disable male spawning for the beta, which albeit a big change, only changed gameplay in the respect it made sure we all stayed close-ish together, and allowed us to reach generation 14+ for the first time in the entire beta. So to summarise, although your suggestions are really good, they just might affect gameplay too much for a temporary change

I assure you that I have thoroughly tested every wolf, snake and boar on the beta map and they are working as promised!

Although there is one slight issue with them, I heard that in the newer updates on the PC version the aggressive animals are confined to their biomes, so the snakes and boars and wolves etc can’t cross the biome they spawned in? I’ve had a few instances where a snake has stealthily stalked me from a dry biome to the grassland, there I was happily making a bowl when it came from behind a tree and attacked me! There’s also been times that animals have attacked me from like 4 tiles away, although I assume that’s more lag than an error

I’ve played many, many hours of this game and haven’t been murdered once. So I dont feel it is an issue. Ultimately it isn’t cheating, in fact it is an important game mechanic. There are some pretty simple ways to deal with it:

DON’T MAKE KNIVES. If you see someone doing so then make a bow and arrow. Kill them with it. Then hide the knife far away. Knife making should be a capital crime.

If you see someone get shot with an arrow then pick it up and hide it. Alternatively, have two bows in any village so you can just shoot the murderer.

They slow down and can’t pick anything up after the crime so it isn’t hard to stop them.

For me things like using milkweed for frivolous objects or draining a well are far more damaging and there is nothing you can do to stop it.

If the devs want us to advance further they could relax the settings even more than they already have. Perhaps they will in the future if they find it necessary but right now we should just play the game how it is.

Okay, should add if you don’t have livestock. By that stage it should be pretty easy to deal with murderers anyway.

In one village I was in that got to Gen 16 and which I must have spent 4-5 hours, running with soil and water, in we died out because we didn’t have milkweed for a hoe. That truely sucked. I’d much rather have gone down in glory fighting to some knife wielding maniac.

We had an axe and forge but that was it. I am pretty new to this game so don’t know how to make them myself. Could only farm at that point.

It’s too far back to check but I think the surname was Queen. I was a daughter of Eve and she made the tools in a later life. She had to go hunting for iron and I followed but lost her and died. I came back later though and carried on farming. Heres a screenshot anyway. 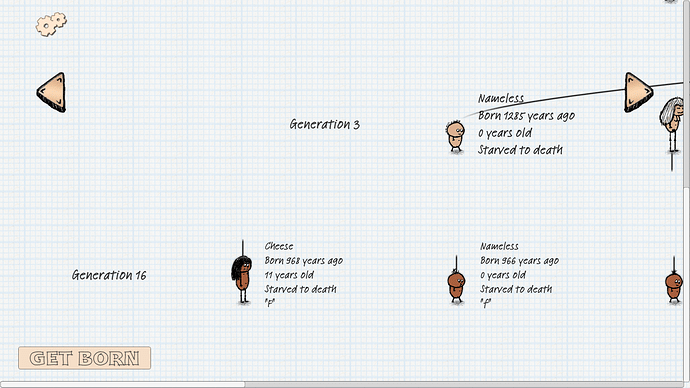 just clearing things up for others and yourself

Personally, I don’t grief and don’t like it, but the other guy seemed mad that you mistook what he did so I thought as a nonbiased third party I’d give my observations.

Awesome! Was hoping I’d find out who it was. I really should have made a home marker first. It was an adventure anyway. Found one of my daughters roaming around a different biome. Stayed there a bit but when I tried finding home I just got totally lost and died.

Lol i have gotten lost so much that i litterly chant a mantra" home marker, home marker" later on looking for iron extra milkweed or even bunnies i turn around and get lost… ‘Well… Shyt…’