I lost my eve spawn today so I was trying to get back home. I spawned right next to Charlotte’s town so I borrowed a horse from her. When I was passing by a walled town, made by River I believe, I started to have bad internet connection but I still went forward in the fuzzy map. After the map was reloaded, I found myself inside the walled town and stuck between the double walls. 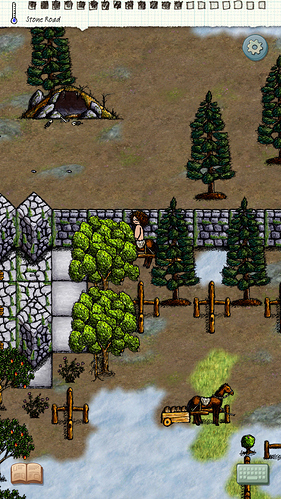 Hmm i think its a fairly common bug on any game dealing with internet conections or load zones. For example in some games where your moving at high speeds such as gtav in a race car the game attempts to load the next are but your moving at such high speeds that you enter the area before its loaded. Once the game loads the items in the area your already deep in side. You could be traped by something or be stuck halfway inside a building etc.

Bad conection can cause something similar since areas can be unloaded when you enter. Bad conection is difreant than no conection. No conection is when you cant eat or pick up anything etc. And is usually returned back to where you were when you lost conections. Bad conection on the other hand is usually when your character rubber bands or it takes 10 seconds to pick something up or you see unloaded areas. Some times you get moved back to place but a lot of times when the game loads you will be wherever you were saposed to be if you moved their unhindered.

For example on the other side of walls.

I could see this bug being abused.

Oh, that was a sadly story