I was born to a well developed village that already had everything. I was the last of my name. So I decided to leave my mark by building stone floors around the oven and forge. The bug is happening when trying to set down the stone. The stone can be in any configuration (whole, split, or cut). I managed to get 2 tiles done but had to really try at it to get the stone to leave my hands. I ended up dying holding a cut stone with a whole pie in my backpack. Its not a once in a while thing. It happens every time I pick a stone up. Past attempts in other lives have yielded the same results.

it would be a bug to repair, tell me more detailed.

Can you take a screenshot of the scenario so I know how to reproduce?

Yeah its also a problem to place wood floors

I traveled many tiles over countless years, but I eventually found my village. I then dedicated my life to studying the physics of “dug big rock” and came to some interesting conclusions. First let me introduce myself: I am Dr. Stone. 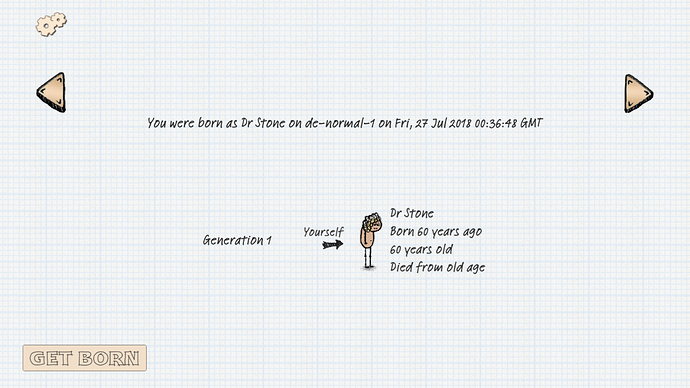 The glitch only happens after carrying a big rock a far distance (more than a couple screens). The temperature doesn’t change while the glitch is in effect. I say “in effect” because it seems to wear off after a couple minutes(years). Its like the game has to catch up. Something else I noticed is when people fly across the screen randomly it is the game running through their movements in fast forward. Agian the game is catching up. I think that both issues are the same issue. My guess is ether lag or an optimization issue.

Work Around:
If you only carry the big rock the distance of one screen it doesn’t glitch out. You can leapfrog the rocks to the edge of the screen. Also to speed up travel you can stand next to a rock and pick it up and set it down on the other side of you then you walk past it and repeat.

Hope this helps. Screenshots are below due to file size too big. 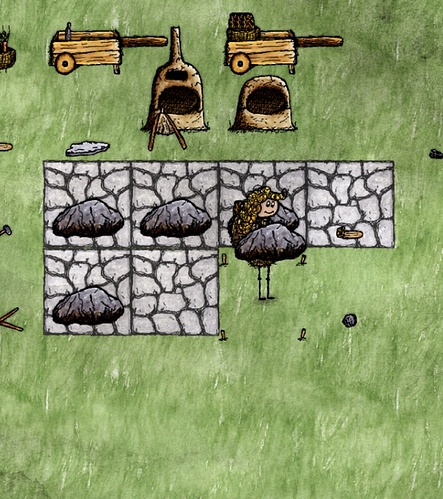 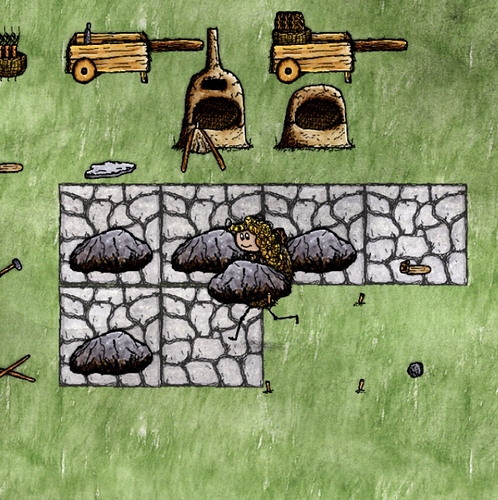 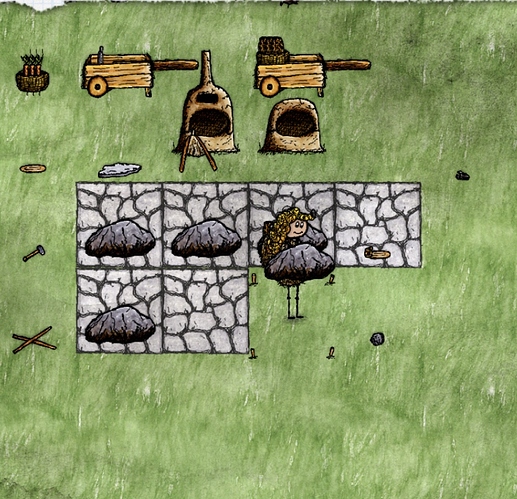 After I finally found success. 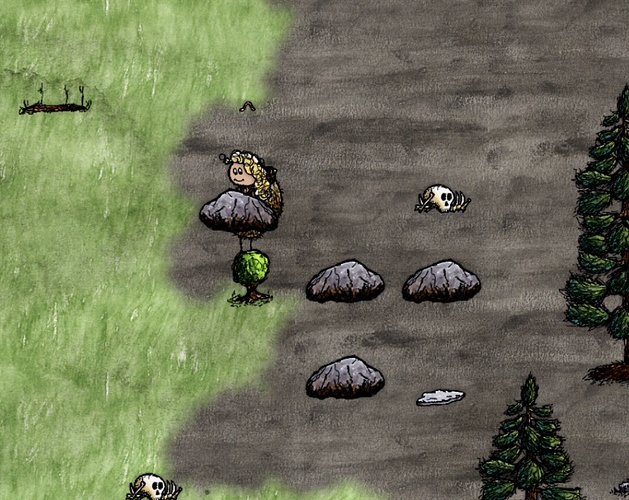 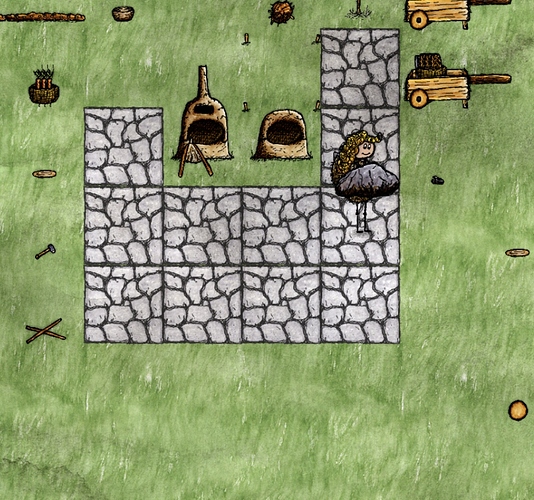 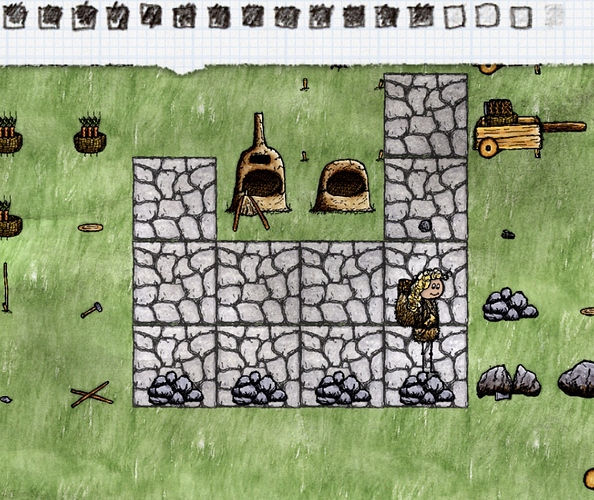 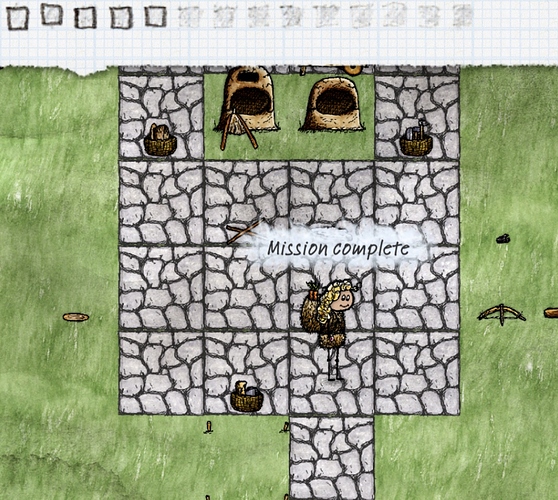 While you are muving your temperature doesen’t cahnge

Would suggest making a bell tower if you are doing stone works! Takes 3 hours between each level you can lay

while you are muving your temperature doesen’t cahnge

That would be considered normal. Its not updating when I stop.

Would suggest making a bell tower

I thought about that but I have never made a bell tower before and at the time didn’t know how. I didn’t want to starve while searching the wiki. I already knew how to make floors so I went with what I knew, then went back for specific testing. When I get back there a bell tower and roads are already planned. The on screen guide would be much better if I could click on items to see a couple steps forward or back.

@Dudeoftheages This was your village we talked about the other day.

That would be considered normal. Its not updating when I stop.

Meaby you were in the same biome

Your “drop the rock” problem, is that about laying the floor or just dropping it on any tile? If it’s the former, that’s a crafting action, so you have to hit the floor stakes with your touch gesture. It’s not enough to hit the tile.

It affects placing, dropping on empty tile, and swapping with item in an occupied tile. I have also noticed it with other items too, but to a lesser extent. If I run a long way holding any random item and go to set it down my character will stop next to that tile and do nothing just long enough for me to notice then set it down. I will be doing more testing more testing is required I’ll update this thread when I have more information.

Meaby you were in the same biome

Thats not possible. I made a point to stop on a specific tile to adjust my temperature in the desert before makeup the journey. The rock was picked up in the biome with the black ground(its name escapes me at the moment). I passed through a small patch of swamp. And you can see from the screenshots where the destination was. I stopped in 3 different biomes and passed through one.

From the longer description it sounds like lag to me. That would cause the delay that you describe. Temperature is also calculated on the server, so lag will delay those updates too.

What ping value do you generally have to the server you play on? High ping value means higher risk of lag.