So i just come out with idea. Peace flower supposed to protect villagers from griever but instead they protect the griever. So my solution is, peace flower will not protect someone who have blood in their hand or recently killing someone. That way if griever run into flower we still can kill them.

Someone else come out with this idea:
Peace flower also drain out all the food bar faster if someone have a blood in them.

Unfortunately they wont need to implement this anymore. The new update is going to kill griefers instantly if they get three banish points (curses) in an hour. And also lineage ban them. So griefers will be dealt with quickly for now.
Also i was like hey thats my idea but then i read the rest of it

Kyom, a practical religion. There I was in the middle of a swamp collecting clay when Kyom came to me. Kyom wants to protect us from griefers. What’s 1 huge problem with the curse/banishment system? Unused tokens. Another is tokens being used inappropriately.

If you see bones placed under Kyom, it is the worst of griefers and will be cursed! Keep food away from the Kyom alter, if a live griefer runs there to be safe from angry villagers, Kyom will let them starve or be killed by us.

This is a new strategy brought to you by the fellowship. 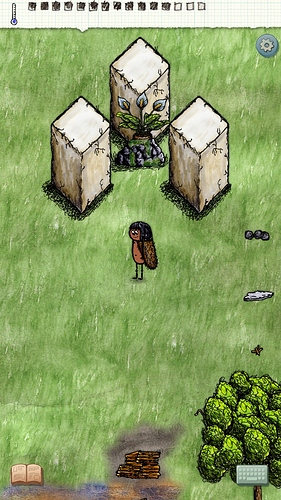 I don’t think the peace flower is working like it is supposed to. There was no end of murder, right in front of one, when I recently played on the Eu server.

Funny you should post this. I was just musing last night… how can we get people to use their curse/banishment points effectively? Back in many different eras the executed used to be put on public display. I’m not precisely sure if the mobile operates fully the same as the PC version in this regard but my understanding is that the bones of a griefer can be cursed for two hours after their death. Instead of putting their bones away with the rest of society we absolutely should put them in a prominent place and ensure they are properly cursed. Put them on display so to speak.

I also like the idea of an organized posse of people chasing the griefer away from food sources so they either starve on the run or can be murdered quickly.

Ya I’ve seen people murdered in front of the lilly before. I’m sure its some kinda glitch that will be fixed. It’s a new item so that’s bound to happen.

I THINK bones can only be cursed by players who were alive when that person died. Anyone born after that can’t curse them, but haven’t gotten a chance to test that out. It does seem to help just knowing that this could happen to you. Last night a good run on EU, only had 1 griefer (noticed)

I think it has something to do with the names of dead people and home/bell arrow being connected to the server.

I force myself to lose connection(hitting power button and then home button to get lost connection screen) then go into observer mode. Usually to see who’s still alive, sometimes to spy on a griefer that’s hiding, etc.

When reconnected to my player before starving(be full when doing this, a high food bonus is helpful) my home arrow’s gone and the previously named bones have no names unless they died after I reconnected.