Uh… Although I think it is not appropriate to discuss Chinese servers here, your agents in China are too silent. There is not much public information about the new update. Just tell us that we will be synchronizing with the international service, and we cannot answer our doubts. So much more detailed updates are what players are looking for.(｡•́︿•̀｡)

so ，I hope to answer our concerns.

thanks！ Google Translation is great

Please read the comments above. @Christoffer

your agents in China are too silent.

They aren’t telling you guys anything about the updates? Could you elaborate? 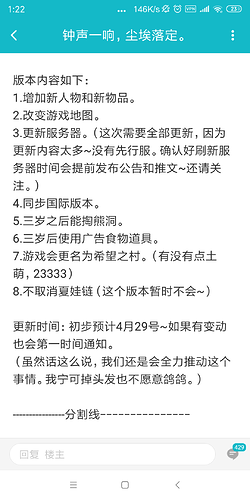 taptap1080×2160 277 KB
1.add new characters and items
2.change the game map
3.update the server（xxxxxxxxxxxx）
4.version is same as International Edition
5.bear caves can only be provoked by players 3 years old or more
6.（sorry…Difficult translation）
7.Changing the name of the game from “一小时人生” to “希望之村”
8.Do not delete eve chain 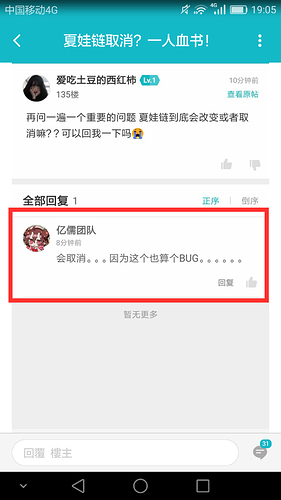 many Chinese players think eve chain have been deleted in You Are Hope.

Other than that there are some smaller improvements and fixes, for example bear caves can only be provoked by players 10 years old or more. No more baby bear griefing.

Your Chinese agent is Unprofessional

Thanks for reaching out. I plan to put together a more comprehensive list of the difference between 1.14 and 1.8 and share it with them, so they can give better information to the game community in China.
There is a holiday in Sweden now however, and I will not be back in office until Tuesday, so it may not happen until then.

With Eve Chain, do you mean that players can be spawned in their previous Eve death location, or is it something else?

I think they mean the spiral.

With Eve Chain, do you mean that players can be spawned in their previous Eve death location, or is it something else?

They can spawn as long as they die at 60 and no matter how many other females on the server.

Thanks!!!We looking forward to it

I have had a very full schedule since last replying, I’m afraid. I realized that we have described each release here in the forum though, so rather than writing the same things again, I have gathered a bunch of topics here:

我还有一点疑问
I have a question.

Please, for the love of god, fix eve spawns

if there are three fertile women on a server, there is no Eve respawn
Is it applicable to Chinese servers?

Yes, it will work the same way on the China servers after the update.

I heard that due to a large number of negative comments from Chinese players, this rule will not apply to the next update, really?