Over a few days I helped building a beautiful village, setting home marker, dying of old age and respawning in same village. Yesterday that respawn process stopped even though I hadn’t changed anything. So I build yesterday evening a new village, set home marker, died of old age… And today morning didn’t spawn in that village… I searched the area and couldn’t find it… So that respawning in same village is only luck and not guaranteed?

I’ve had this happen twice where I spawn in the exact same play.

We do seem to spawn in the general area as previous on many occasions and I think this is part of the game.

Where I have spawned on a home marker has been when I found my way back to a previous village I just died in and set a new home marker… then I respawnes there until I came as a baby to someone elsewhere.

Don’t know if this is actually a bug - because it is awesome but definitely too advantageous to you. But probably only would happen on a server with 1 person on it who keeps respawning as the only eve.

If you live all 60 years and die of old age, the server will remember the spot. Next time you spawn as an eve, it will be in the same spot.
It has to be the same server and is not guaranteed to survive a server restart.

This is not a core function, but an embellishment of sorts.

Yesterday evening I lived 60 years and died of old age. Today on the same server, I was the only player online, spawned as eve but in different location… Was there a server restart?

Just now it happened again. I built a base, set home marker and lived 60 years, died of old age and 5 minutes later I wanted to play again on the same server, got reborn as an eve but at new location…

Sounds like we need to take a deeper look at that then. Could you send me screenshots of the two family trees? That would help us know where to look. 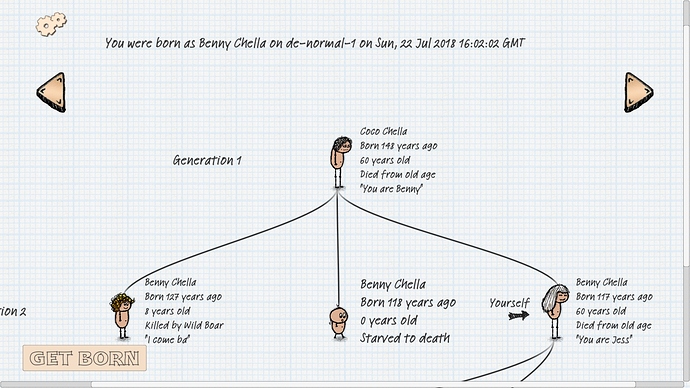 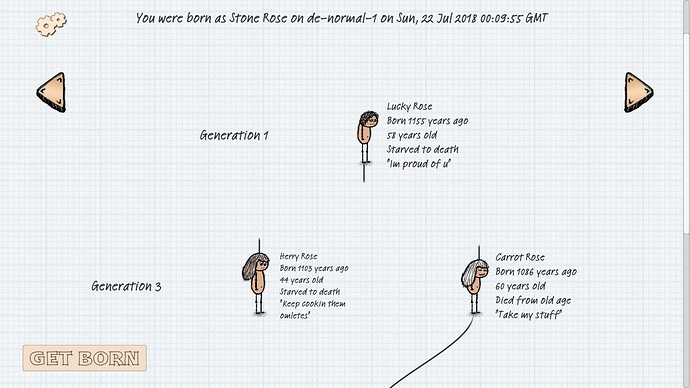 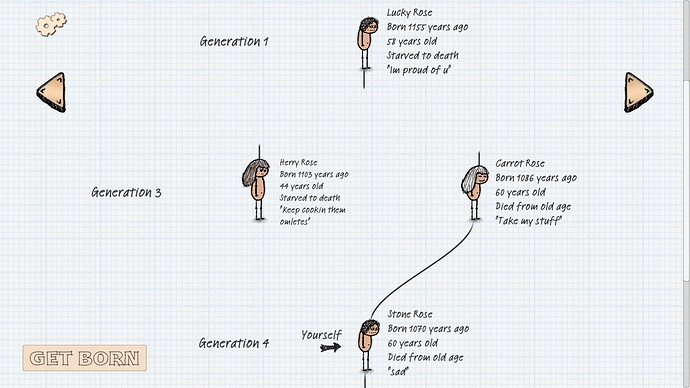 Thanks, will have a look at this tomorrow.

Ok, had a look at this. Here’s the correct description instead of the previous one:
If you start as an Eve and live to age 60, then your place of death is recorded and you can spawn there again next time you are an Eve again.

In other words: if you are not an Eve, then living until 60 will not have this effect.

Awesome!! Does that mean you will definitely spawn as an eve there, or could you spawn elsewhere as a baby?

You will always spawn as a baby if possible, but if you do spawn as Eve there is a lookup in the database to retrieve the death position from your latest Eve life, provided you made it until 60.

As I said, more an embellishment than a core functionality.

Thank you for the reply. That explains the situation!