I think it would help to develop further if there would be more eves or for this beta version even just eves since only few people seem to play… I think it’s sad if the only eve, the mom dies and had only a son or two sons… I think this would be really helpful.

But I get what you mean about mother’s having lots of sons, on one of my lives earlier I had 3 sons in a row… which isn’t very benefitial to the survival of small starting colonies

So, would removing boys for the time being solve the problem, do you think? Or do more people need to spawn as adults?

In any case I assume we’re only talking about the duration of the beta period, correct?

Spawning as adults wouldn’t solve the problem, you are alone and only if ure lucky a child will be born… If there is an existing colony, it would help if people would be directly born in those to maintain and rising up the village - with more females, like TheRedBug said at least 75% or higher. Of course only for the beta. I am not sure if Boys should be completely removed. Maybe the game can detect how many players are online. And if there are for example only 4 people online, the rate of females should be 100%.

We’ve had a look at this. The selection of player character is not a well-contained piece of code on the server, as it involves the mother’s race and various probabilities. So it can’t be done through a simple code change. Instead we’ll have a look at if we can disable the object definitions for the male player characters. This would mean that no males would show up, no matter how many people are currently connected.
I guess this approach would be ok for the beta, right?

Something I already do an suggest others do. Is to tell newborn boys to “come back as girl”. Don’t feed the boy. That just makes the other player wait longer. They are almost guaranteed to be born to you again, as through my testing have found that there is most likely only one viable female alive at any given time. Note during peak hours there might be a second viable female.

I agree on Christoffer’s suggestion to disabling all males for the beta. It would be a lot easier.

And how can you see if it’s a boy or girl as a baby? I disabled nudity and only can tell on adults.

Ok, we will test a solution for this tomorrow and if it works out we’ll push it live. 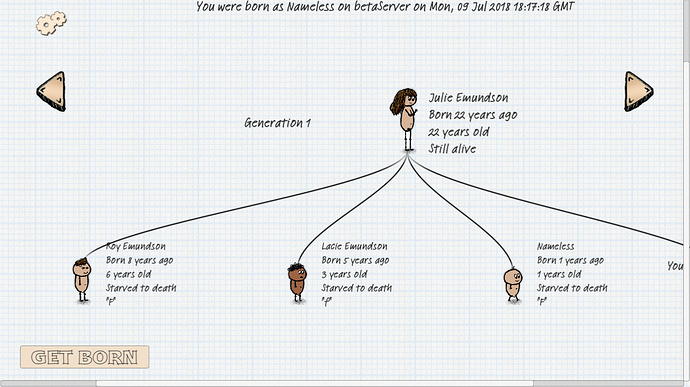 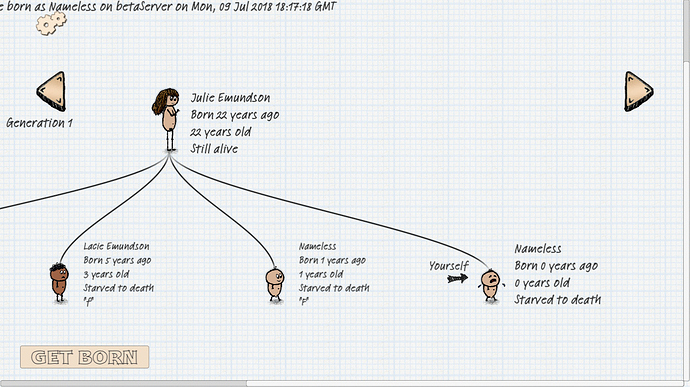 Four boys in a row I just think that’s majorly extreme haha, disabling boys during the beta is the best bet for now but even still a higher ratio of girl to boy children would be better for the overall gameplay even post beta, it’s allows settlements to develop the way the game was intended, instead of great starting settlements being lost within two generations…

The removal of male characters is happening as soon as the beta server becomes empty of players:
https://forum.onehouronelife.app/t/server-restart-in-progress/157

Ok, it’s done and the server is accepting players again.

Let’s see if we can break some generation records now

We are definitely breaking records! I had a thought, is there a way to make sure if multiple eves spawn in, that the newest eve spawns next to the other like a baby would? Just during the beta, I think it would be pretty cool to have multiple families living side by side, and would help colonies grow larger!