Sorry to bring this topic up again, but I thought of a solution which might solve the problemo once and for all without resulting in a load of baby suiciding. Basically I’ve been seeing lots of annoyance in the Fellowship about the Eve spawn rule where people got unlucky, losing their spawns when there were too many fertile mothers on the server or something. I can see the merits of such a system however when you’re playing on a server where the eve spawn is your fundamental building block in making a functioning advanced civilisation then it can be irksome. Eve spawn civilisations, especially when planes come out, could take on a very different, interesting turn to traditional civilisations in how they would last much longer but be less active during that time. So how about this. If you manage to die of old age as an Eve then the next life, regardless of the number of fertile mothers or general population, you can respawn as a new eve in the same spot where you died. You can only lose your eve spawn if you die before 60. Therefore only players who are both very good at the game and willing to play as an Eve for successive lifetimes will use it, and they won’t need to create a string of baby suicides and Eve spawns lost to bad luck to achieve this. Everybody else apart from this small minority of solo players would play more fluidly as a result of not having to worry about baby suicides or, under the new system, keeping every single kiddo alive in case they’re an Eve hoping for a redo. It would also mean that Eve spawning could be used even on larger servers, hopefully helping the smaller settlements to get a leg up into the big leagues before they die due to their camp consisting of a few naked people farming carrots. This would be especially handy with coming updates such as the temperature overhaul which would make an advanced civilisation much more likely to survive in most scenarios than one starting from scratch, even more so than it is now. I know this would likely give rise to a whole host of soloist players, but I’d argue that players like that will find a way to play on their own regardless of this change or not. But this way they wouldn’t need to baby suicide or anything first. In low population servers this minority might also then be able to construct a level of civilisation never seen before on such servers, using planes to connect vast swathes of territory and settlements where normal non Eve spawn using players can get born to the eve spawners and their descendents. It’s probably not the most realistic of ideas when compared to real life, but on the mobile version where this sort of thing happens all the time anyway because for many there is no choice, I think it’d go down quite well with the community.
Thanks for reading anyway. Chances are all I’ve said is a load of nonsense anyway for one reason or another I have not yet considered, but I think many players on the mobile version would appreciate it. Sorry for writing so much, this is a long post now I look back. Reply to it if you like the idea : ).

What do you think of it @Christoffer and @Jincheng? Sorry if this isn’t a good idea but I think the players seem to like it at least. Maybe just as something for the mobile version where Eve spawning is more needed.

Solo play is not what the game is about. I’ve said it before. I’ll say it a thousand times.

What are you trying to say?

It might make solo playing easier for some who enjoy that sort of thing but they can do that anyway under the current Eve spawn system. Whether it’s how the game is meant to be played or not regardless, at least this way there wouldn’t need be a string of baby suicides or worried mothers hoping none of their children die in case someone comes back to grief them for losing their eve spawn. Plus these days not that many people do soloing, usually they use a cross between the two. Like in the Fellowship usually we use eve spawns to restart out cities and empires but the eves will still give birth to non Fellowship players. That means you have a chance of being born into a mega civ even on a low population server.

Hmm… your idea might works but there’s a scenarios where everything would fall apart. Solo players likes to play solo (although solo wasn’t the way the game supposed to be played, but we still see them playing solo even in this new eve spawned system).

If your idea was used, and solo players die young in their solo town, they might born as baby and trying to suicide so they became eve again and play solo again. Baby suicidal rate is mostly caused by solo players. And I’m afraid that one day, the amount of solo players may increases because simply solo playing is fun and addictive.

That’s true, but they do that now anyways. At least this would mean that big cities like Kapugen which rely on eve spawns will be able to expand more reliably. I’ll make a post about Kapugen btw now so you guys can see what the power of Eve spawns can achieve XD.

How about, You need to die old 3 times (or more) as baby before you can be eve. That way we have to play and force to contribute to a village.

Yah sounds like a good idea. Although once you have an Eve spawn then as long as you die of old age then you can respawn without any more fuss. Btw I finished that Kapugen article. Hopefully the city will become a permanent fixture of Europe 2 life.

I would say, I play solo before. Sometimes I born as child and play with others. In my experience, playing together will cause baby suicide too. (just dun want to blame all that to solo player) Sometimes ppl meet good players and want to go back to them so they suicide when they born to the “wrong” family. I do have experience that my kids die and born again and telling me that they tried for few times until they get back to me. Or simply they have unfinished job and want to finish that. Lots of reason for suicide babies, solo is one of them only. No matter how the game change, ppl would still play the game in the way they wanted to. I think having a baby life till 60 is a good method, but baby suicide will continue, I am sure. 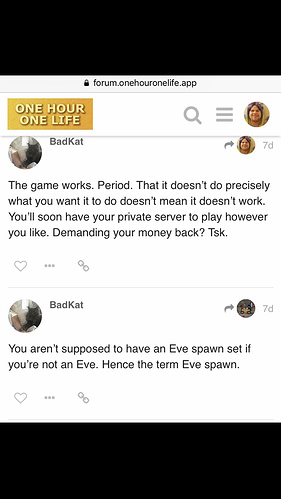 Is your cat got your tongue? Use words, ben. We didn’t exactly know what you’re hitting.

Thanks for reinforcing my very valid points!

This is true. I play “solo” from time to time, to experiment with new tech and just to take a damn break from griefers. Even with the recent update, I will take my chances and play solo in the middle of the night, or early at 5am so no one’s online. This increases the chance of getting your eve spawn.

I still lose my solo towns a lot, but it doesnt matter to me. Solo to me is like taking a short break from the monotonous cycle of every single game turning out the exact same way - a family dying to griefers or just the fact that there are not enough people on the server to continue.

No matter how the game develops, as long as respawning as an eve is a possibility, I will always figure out a way to do it, and do it from time to time. Theres nothing wrong with playing solo. Some of us either play on low-population servers where all the towns look the same, or we just want to take a breather from the frustrations of working your ■■■ off only to get griefed. I have made friends with many solo players and we are all on the same page.

This is a good suggestion but i can still see the possibility of baby abandonment happening a lot with this idea.

Yah but baby suiciding would probably happen less anyways. The only time people would do it would be to spawn in with a friend or to get to be Eve in the first place. But there’s not much we could do about that, except say that maybe you can only start being an Eve if you have lived a full life or two beforehand. Considering that many servers rely almost solely on Eve spawns makes me think they need to be strengthened anyway on mobile if we want to see a town live through the night. This is happening already but it is more difficult to maintain, and it’s hard enough keeping an Eve spawn as it is XD