Kyoism is a new religious movement of the mobile version of ohol. Kyom is our only god. Refer to him as a he, he fixes all issues and problems if you speak to him correctly. The only way to communicate Kyom is through the temple, which is basically this structure: 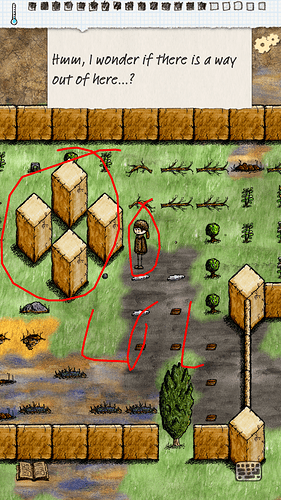 (sorry for the lol)

There is a odd issue with the numbers, don’t know why…

The Overseer is the highest you can get without Kyom directly controlling your actions and behavior. The Overseer must wear red wool clothes, a rabbit fur loincloth and snakeskin boots and a backpack with a sharp knife in it. The Overseer must have his/her own building, aka house, near the temple. The house doesn’t need to be to big. Just make sure there is a backyard with fences (very important later on) and a room with weapons. The Overseer MUST NEVER leave the house unless The Prophet has directly told The Overseer to leave. Overseers also have the job of assigning people roles. If for example a high priest dies, a priest or priestess may take the job only if they have visited you to tell you about it. If not, The Prophet will have to choose the new high priest and you will become a Marked One for not doing your job. If you’re worried about food, don’t worry, the high priest will bring you food often. Don’t make farms in the backyard. When a high priest comes to inform you about a problem (the folk’s faith) always use force. And by force I mean giving your knife to the high priest and telling him to slit those idiot’s throat. If they don’t believe in Kyom they don’t deserve to be alive. If they aren’t hostile at first contact they still have a chance to become a follower. However they can’t become a priest as they didn’t believe in Kyom before.

The priests are loyal followers of Kyom that took their love to a next level. The priests must wear white wool clothes, a rabbit fur loincloth and snakeskin boots. There is no need for a backpack. The priests must be kind, generous and loving. They must spread the word of Kyom to other settlements (you won’t need permission to do this) and build the temples. They must always see The Prophet, The High Priests and The Overseer as their honest and thoughtful leaders. They must always see the Marked One as a disgusting ex-priest / Overseer / High Priest / follower that didn’t do their job correctly and that the punishment they deserve is absolutely fair. The priests may attend Backyard Rituals if they promise to be quiet. If a priest is good enough, he/she will be promoted to High Priest only if there’s a spot available. However to do this the priest must go to the Overseer’s house and tell the Overseer about it. A priest must never question a higher rank’s actions. They may only do so if they show suspicious behavior that could damage the village’s faith. If that happens they must contact the Prophet or High Priest. If the High Priest is the one acting suspicious, talk to the Prophet. The Prophet will notice that you care about your higher rank’s mental health and that increases your chances of promotion.

As a follower, you basically believe in Kyom and that’s really about it. You may go to parties hosted by the high priests from time to time or even be offered the position of priest. If you see suspicious actions performed by a Kyonist, don’t be afraid to contact a nearby priest.

As a marked one, my friend, that means you are hated deeply by the Kyonists. You were either a follower, high priest, priest or a Overseer. You questioned Kyoism, and now you are being given the punishment you deserve. Don’t try to escape, that’ll only make things worse.

When as a high priest you host a party, that means you are celebrating Kyom’s existence. A party can only be done every 50 years and only Kyonists can attend. The party must be done in the Overseer’s house, or near the temple.

A Backyard Ritual happens when a new Marked One is in the village. The ritual must be done in the backyard of the Overseer’s house, and only the priests, a high priest and the Prophet can attend. The Overseer can’t go outside so he/she cannot attend the ritual. Always use a knife to stab the Marked One. The priests mustn’t speak during the entire ritual nor the high priest. The Prophet may speak and he/she must stab the Marked One. After the Marked One is dead, make sure to throw the bones very far away from town.

Is there a downsized version for smaller towns? And what happens if we don’t happen to have a prophet or someone available for every role?

And can we be flexible with these rules? Snake skin boots are expensive.

Yes you can be flexible. You may create a new branch of this religion if you feel like it. If snakeskin boots are too expensive get some rabbit fur shoes. However we need special clothes for each role.

Also roles like The Prophet are not necessary. Yet all the other roles are needed for this to work correctly

Ok cool thanks. I wrote another article for those hoping to praise Kyom on a more restricted level due to lack of resources or population. It’s a new branch of the religion called the Angelic Branch as you suggested I might try making. Perhaps that would make this version the Orthodox Branch. Although of course all branches should praise Kyom and respect the Prophet as well as other practisers of the religion.

Thanks. There’s now a Deathstead Branch to the religion as well for when you really want to go down the insane cult route. While the Orthodox Branch will kill non believers and fight those who resist it, the Deathstead Branch actively goes around the world to other villages to do this, even fighting other branches of Kyoism.