The worst way to die poll

Definitely boars and wolf. They are sneaky more than snake itself.

You forgot to include Snakes

Was going to do, but i cant change.

Tap on edit, the litle pencil in the top of your post.

Or in the bottom…

I see. Good to know…
Thanks 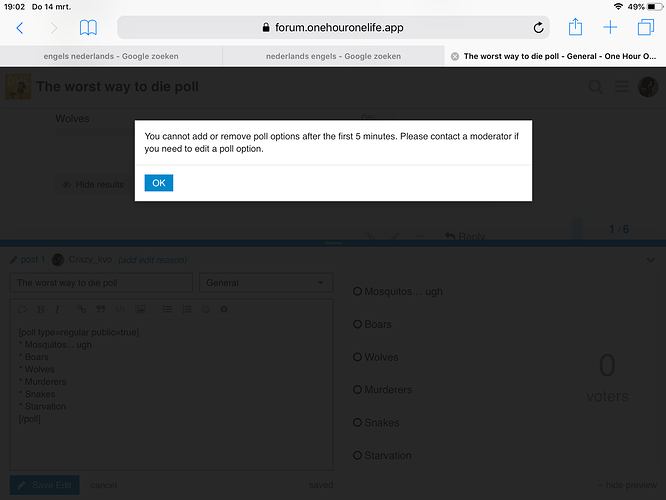 Oh, it worked to change muderers to murderers but i cant add an new option.

Actually i cant edit ether. Its says that you need to create a new post.

I can maybe do that, whe only have 7 voters.

I put a screen shot for you to see.

it makes sense that you can‘t edit it after people have already voted. this pole wouldn‘t be representative anymore. because people which have already choosen an option, hadn‘t the new options available from the beginning. but hey - who cares.

Dying at 59 as eve because someone stole your berry bowel and you broke ur food bonuse ;-;

I haven’t starved in quite some time non-purposely, so I’d say murderers or mosquitoes. Sucks that you lose food bars fast without clothes, yet with full set of clothes getting stung by mosquitoes while you’re alone with no one to feed you is a definite death sentence.

Great poll! I took mosquitoes.
I don’t like murderers, starving to death, or bears but at least with them death is relatively soon. But with mosquitoes the time suffering is the worst. You can’t do anything but sit and wait while hoping to find food right away when it wears off so you don’t die.
As long as you find food you can survive, but then you have to go back and get what you dropped and risk getting ‘swarmed’ again…