I don’t know exactly what category this belongs.

I have also heard complaints about being able to be killed, and I would like to inform people, that being killed is NOT the worst thing that can happen to you.
Also, since meds are a thing, it’s possible that you can be saved.
ALSO, having the ability to kill, really makes the game more interesting.

Smart griefers, don’t kill.
Smart griefers destroy your town, and then you wish you could kill them, especially as a solo player.

So please people, can we save the U.S. beginner server, for BEGINNERS?! 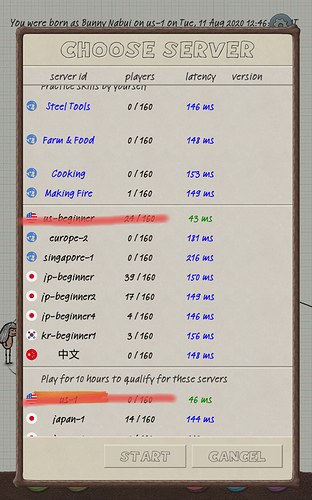 Is the game not that popular in the United States?

You have a good point. From now on, I’m going to make the effort to play on US 1 more instead

It’s more fun on the beginner server because of the hunger and no killing.

Hunger isn’t even an issue once you get a town going. The yum bonus keeps you full for a long time if you do it right.
And if you have meds and a partner, you can’t really be killed.
It sounds like maybe you just need more experience, if that’s the case, I understand why you play beginner.

I like the regular server.
But when i had a town there my kid killed me and griefed my town.

It has happened to me too, multiple times. But it happens in the beginner server too, at least on the regular server you can fight back.

Funny thing is when MsBee and I plays for a whole day on us-1, there’s more people on it than us begginer

Please people. Be the change you want to see, don’t follow others. Play on us 1 even if no one is here. Eventually, there will.

Ya maybe it would be better if more ppl were on at the time, since someone else couldve killed my kid.
But at the time all I could do was give the person one banish

I’m actually not a beginner and can craft all the items in the game. I’m just not interested in the yum chain minigame. It’s boring to me. The minigames I like in this game are building, smithing and treasure hunting with the schnauzer and teaching and talking to villagers.

There are a lot of issues with killing in the game. Making bandages is hard. It requires you to get sheep and someone to watch the bandages because all the griefer has to do is pick the bandages up and throw them on the ground to render them useless. Plus you need someone smart enough to know how to heal and the time period between getting stabbed and dying is really short. I am always a solo player so the chances of someone healing me after I get stabbed is close to zero. Also, there is an issue with bans. I just played a life where my mother voted to ban a player because she named her kid autistic and was using slurs. The player decided to follow my mom around and cuss at her and the village banned her. However she had a child that was her friend and he continued griefing the village and we were not able to ban him because we used our bans on his mother. He tried to kill the villagers but since this was US beginner, the only thing he could do was kill the sheep and steal the horsecart.

Also, I feel like the US playerbase has more trolls. I’ve played on the regular Japanese and Korean servers and it was a peaceful and fun experience. However, even when playing on the US beginner server, I get a troll a lot of the time. I’ve even encountered US players with negative B numbers next to their name because they went to the Japanese server and trolled them and got banned. I’ve had Japanese and Korean and non-US players play with me on the US server and they were always really nice and respectful.

My hard begging trip. For the tomb. T^T XD
(Happy end.
Next day, I was comeback my home.)

You can use spartifilum.
If you are eve, you can ban griefer.

I have a strong lag and English is difficult. Still, I sometimes choose the US1 server. The US server has more diverse people and incidents than the Korean server (main choice). I have fun playing random. And I love a good family, even beginners. I met a lot of good families on American servers. Information updates are slow, but some good families were angels. Many griefers are a challenge. The griefer handling is more convenient for a regular server. A chain of petals protects you. Now the population is so small that it is difficult to resurrect. So I entered the Beginner server. 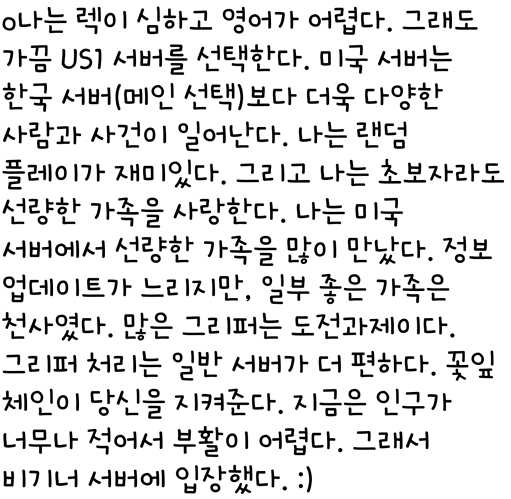 Hey! I was mother Lara. This upsets me that the child continued this behavior after I passed away. I thought maybe he would just get over it! Truly terrible.

I would play on us 1 more often.

I understand why some people play on beginner, and I am not asking everyone to always join U.S. 1.
But I know that there are people who join the beginner server mostly because of population, and I hope these people can reconsider, and maybe join U.S. 1 more.

I joined the regular US servers today since the population was 5 and the beginner server was 10. It was ok but the family died out because of not enough players on the server. I ended up alone at camp. What time do you guys usually play?

Well if we both had off today, we could be playing rn.
I am in Pacific time zone.
I usually work mid day, but you could always PM me on discord to check if I’m available.

Also, I wanted to add, that snowball fights are another reason why us-1 is the better server. ;D