This new version is on its way and should be available in your store soon. Followings are highlights in this version.

Thanks for reading! Enjoy the game!
Regards from the OHOL for Mobile team.

I have just rolled out this build to both TestFlight and the internal test track on Google Play. Servers for the new version were launched in the US, Europe and Asia earlier today.

The new data version is 124. The other servers will be migrated over from data version 116 within a few days, so please upgrade as soon as possible, and try out the new and improved features.

See you in the game!

We are quite close to release now. Help us make it a great one, will you?

First impressions were great!
The tutorial will help beginners to understand the game more so that players won’t have to ask for help, which saves alot more time!

The “yum” mechanic was quite interesting, but i haven’t tried it too much yet. So i can’t tell for sure if it balances the hunger bar issue yet. But i will make sure to give my feedback some time in the future!

And adding more languages is a great step towards full release. Its a great way to gather more players, which will help to develop the game further.

All in all I really like where the game is going, and I cant wait for the full release!

Hmmm - prophanity filter seems to be a bit much. Can’t call myself queen or princess. Which I guess could be used in a sentence to hate on someone but certainly aren’t profanities in themselves

The Queen Dude legacies are at an end!!!

Yes, it’s a bit narrow. We had to purchase an off the shelf tool for this. Not sure why it would censor those words. For now, we have to make do with this filter though.

I may have a look into it to whitelist them at some time.

Are we meant to have male characters now? Just saw my “brother” 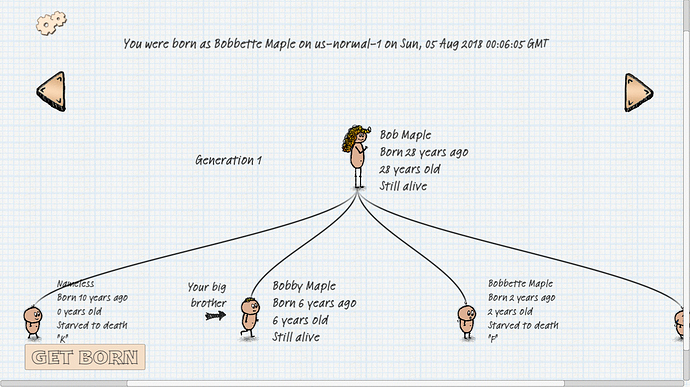 Since the final release is coming close so we decided to bring the game more like a “real” one. So males are back now.

Why hoe is a bad word

I guess we’ll have to white-list it, since it’s pretty important in the game.

Have been playing the game for a few days, now thank you so much I do have a major problem. That been wanting to address with and see if you could fix it as soon as possible have been playing for a few hours, but the problem I been having is there is not enough hours in a day.
To say the least I love the game great job.

Also by the way is there a email I can talk with you had a few ideas for your game and would love to here you input.

Or send me a email when you have a chance
david.arguuilez@gmail.com

LOL… you can say ho (how I write the vulgar word) but not hoe.