I made a survey about the game and would like you to give some feedback.

Here is the link to the survey https://de.surveymonkey.com/r/TDDJZMT

The survey will be online for about 2 weeks.
I will share the results here and also share them with the developers.

Thanks for your participation

Thanks to everyone who filled out the survey so far

you are amazing! I appreciate it a lot

The survey will end on the 7th february. So it’s still open

and everyone can make their voice be heard.

Here a sneak peek how the statistic looks for question 6 so far:

What aspects of the Game are you the most interested in? 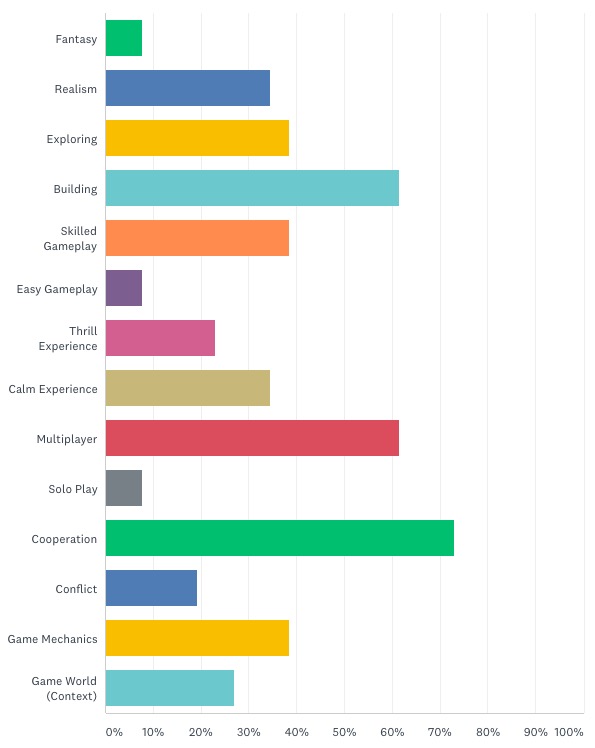 Yes you are not too late

tomorrow i will wrap it up and make a summary of the survey. So today is the last chance to take part. Thanks to everyone who filled out the survey so far

Here is the summary of the survey:

Thanks to everyone who took part!

1. Which feature in game is the most valuable to you?

7x Multiplayer capability to work together for the benefit of all.
7x Born in random families with real players and depend on them to survive.
6x Crafting things and learn new recipes.
5x Peace Lily Rebirth system
4x Building a village.
2x Spending a lifetime in 60 minutes.
2x Role playing with babies.
2x Horses.
1x Randomness of biomes and content make every life different.
1x Unique yet non-persistent IDs to track griefers.
1x The chat system in game.
1x Santa should be around all year.
1x No-killing servers.

2. If you could change one thing in You are Hope, what would you change?

13x Make it much harder for griefers. For example by removing anonymity with permanent member ID’s. Or having more no-kill servers or 50+ hours server. Or improve the the banishment system by reducing the banish cooldown to 30min. Or strengthening donkey town rules. Or reduce the amount one person can destroy in a lifetime. Or make griefers unable to use peace lilies. Or taking out the locks and keys.
8x More content and regular updates. For example food cultures from around the globe even insect food. Or breeding horses with various colors. Or a larger cart. Or more decorative tiles. Or more various characters for signs. Or more content for the early stage of the game. And more iron deposits.
3x More players and maybe more events.
3x The game controls are challenging.
2x The ability to manage and organize the friends servers list.
2x A map with cities, distances and coordinates.
2x Banning certain words from the chat and establish community guidelines.
2x Respawns always as Eve
1x Slower hunger.
1x Every tree replantable.
1x Able to heal yourself.
1x Putting babies in carts.
1x Better directions in tutorials.
1x No mosquitoes.
1x Abel to use other tools than shovels.
1x Better graphics.
1x No changes at all.

3. Do you have struggle with something in game? 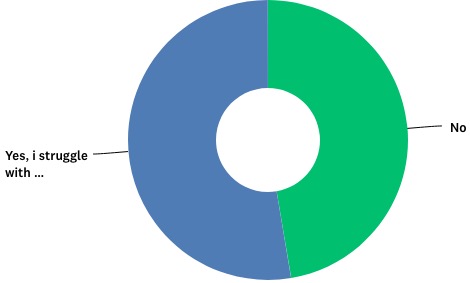 Players who said yes:
8x With Griefers. They destroy so fast so many thing. It takes so long to rebuild and clean up again what they destroyed. Also they cause trust issues.
3x With the lack of players. Having a family for many generation is rare.
3x A proper organized wiki with steps how to craft stuff for finding out recipes.
3x The steep learning curve with limited resources.
2x The lack of content makes the game repetitive.
1x Better communication for content updates with instructions.
1x Often high latency.
1x The controls are too difficult.
1x Some bugs.
1x Bullying, mobbing, discrimination, sexism, rasism.

4. Did you quit playing You are Hope at some point? 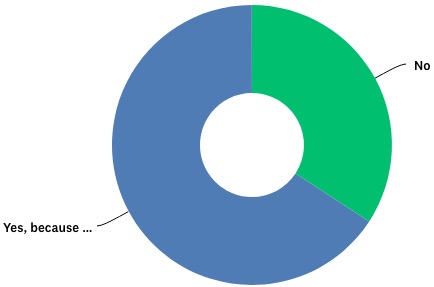 Players who said yes:
8x Too many griefers online. They lower the fun and destroy lovely cities built by hard working players. You spend a lifetime and griefers use minutes.
7x Due to the lack of players the population is low on the servers. No events and people playing solo make it even worse. Advanced players have their own towns and don’t play that often in the early stage.
7x Not enough content updates. Mostly small updates. Not that much to do in later game.
6x Lack of time to play. One hour is too long.
6x Rude, extremely toxic, immature and vulgar players, who express sexism and discrimination. Private servers seems to be the only way to avoid the stranger danger.
1x The controls are too difficult.
1x The lack of resources in late game.
1x Too many advanced items with a lot of steps.
1x I was pregnant and had a newborn.

5. How did you learn to play the game?

16x With YouTube videos of people playing it the game: Japanese 28, Twisted HoneyBunnyGames and streamers.
15x From asking other players or being thought by them. In game which takes a lifetime or outside the game.
9x Taught myself and tried out a lot.
9x With the in game book (guide book / recipe book / guide / handbook).
8x With the OHOL wiki website
7x The starting tutorial and practicing in the training server / practice rooms.
6x Watching or observing other players in game.
2x Google

6. What aspects of the Game are you the most interested in? 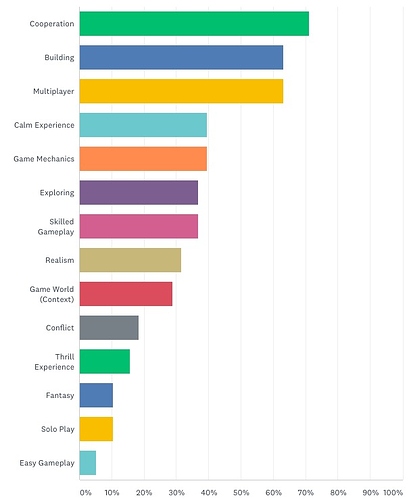 7. Do you play with someone on a regular basis? 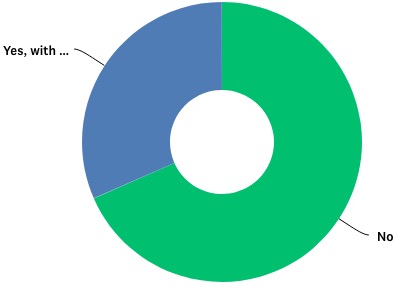 Players who said yes:
8x Friends who I met through this game.
2x People I met in game and we kept contact through discord.
2x Yes, i play with everyone on public servers.

8. What could be done different, so you can engage better with the You are Hope community?

8x Making the forum better known because it’s a good way to talk to other people about the game. Also improve the forum by reducing the language barrier by translating the topics to japanese and korean, so more people would join the community. Or separate the languages completely.
6x Handling griefers and reduce them by improving the banishment system or with permanent usernames. Giving the original eve with a peace lily more powerful bans. Giving ranks or rewards to good players with more rights. Maybe a longer more interactive Donkey Town for griefers.
5x The players communication could be improved by: Team building with tasks to fulfil. More food and clothes let you engaging with others. More weekend events. An in-app chat for all players on the server for posting comments. Paper writing available earlier in game and note storage.
3x More content updates regularly maybe with surveys to see which game suggestions are most liked.
2x A link to the discord in the game.

9. What do you hope for in the new game?

17x A a bigger and better tech-tree worth climbing. More things to do in a developed towns and more objects to decorate your place. More animals, plants, natural resources, clothes, building supplies, resources to make furniture and even customize all of them. More technologies, advance crafting and skills to learn for more advanced and high level items. Resources better managed. More items for babies and more things to do as baby. And update the game regularly.
10x Less griefers and a better banishment system, or just a way to deal with bad players or make it harder to grief in general. Less trolls and a better supported system to enforce game rules to stop sexism, racism, discrimination and bigotry.
8x More players and a higher population on the servers. More events. More widespread and consistent marketing and public promotion to attract more players for a bigger popularity of the game.
5x I hope the new game is good, lots of fun, lovely stories and even more fun than YaH.
3x Better graphics
3x Better mechanics and something that force players to rely more on each other.
2x A good map showing distances to hotspots.
2x Randomness of biomes and maybe ownership of land.
2x Not far from reality, survive in nature and develop simultaneously different civilizations.
2x I stick with You are Hope.
1x More options to start a town instead of swamp/grassland combo.
1x More solo play options.
1x Permanent users names.
1x Better command functions.
1x Longer lifetime.
1x Better in-game chat.
1x Recipe book showing all items and resources needed.
1x Collecting items faster to build something.

10. Anything else you wanted to tell the developers?

5x Please change the banishment system. Bad players are main problem with the game, it’s hard to trust each others since it’s anonymous. The fun stops with griefing and making irreversible damages. Griefers know how to dodge the law and player just do solo play. But we are social being.
1x Your anti griefing work has been phenomenal, thank you so much!
4x Please don’t discard you are hope when developing other games. I hope you go on developing this game and it keeps working forever and you continue to operate You are Hope.
3x Please make a good wiki with the new tech tree which is applicable also for long and complicated mechanics and which tells how fast items disappear.
3x The spawn should be further away from each other so competition for iron wont be a problem and biomes can be larger.
2x Keep listening to the community to keep the game growing. The way you care about players experience is fantastic.
1x The realism in this game is unmatched, the idea of having real players as babies is amazing.
1x I tried OHOL and it seemed too dull to me compared to YAH.
1x You guys are great, I’m still waiting for a real Santa to visit me

And there were many lovely messages for the developers

they got them too, no worry!

Thank you for making this survey and send this feedback to developers!
I hope this feedback will be helpful to the improvement of YaH.

I think the situation from this survey is true. Most players have struggle with griefers. No town has never had griefing. In this game, the cost of destruction is much lower than the cost of creation. For example, if you plant trees, you need to water it twice, but griefers can chop it only by an axe; If you want to raise livestock, you need to catch them and feed them, but griefers can kill them only by a knife; If you want to make a plaster wall, you need to collect adobe and make plaster, but griefers can ruin it by only a chisel. It’s a sad thing because none of the tools were made by griefers. They just pick up the tools in town to destroy.
If there are only one or two griefer, players can handle it, but if they meet more than two griefers in a day, it is very desperate.

Thank you for making this survey and giving the summary!! We can see many people bother with griefers and manage to protect from them. Hope this result helps our great developers to improve the game, too!