So I dont know about anyone else but my favorite OHOL character is the red girl with freckles. Mostly because she stands out among the other Eves.

I was curious, what’s your favorite character? And why ?

The brown-haired pale-complexion man with the groovy moustache. Combine that with a reed skirt and a basket to get a “rugged forager” appearance but it can just as easily become a “innovative wool clothier” in larger settlements. This is maybe because I prefer playing as a male character rather than a female. When I’m a woman I always struggle to get that right balance between caring for children and working if there is no village nursery (which is why nurseries are so vital, just sayin’) and I tend to get the benefits of raising a child anyway far more than most women if I master a trade and then take on an apprentice who I show the ropes. Most people who have children in this game don’t actually raise them, they just wait until they can no longer be fed and then let em go. I prefer the crafts model for this reason. The nursery nurtures the kids until they grow hair, then the children go find masters or masters find an apprentice or two at the nursery who they teach the basics of their trade. That way I tend to find is much more fun. Especially with a rockin’ beard : ).

My favourite female sprite would be the straight dark haired, dark white skin. The frizzy haired one is fun but a bit all over the place for me : )

I like the pale one with flat brown hair.

Oooh i love that new character. Red hair with freckle. I see her once in the jungle. She’s my mom but leave me to die. She’s wearing seal skin and a bow in her arms. Imagine how majestic that must look like.

Edit:
Oops. I think we talking about different eve. Do you means this 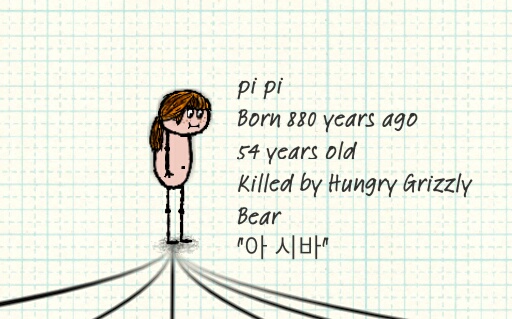 I like thw second one. Yeah it looks bad here, but i saw her wearing seal skin and running. Her hair blown by the wind, and a bow in her hand. Like a female robin hood. Or one of those Disney princess which her mom turn into a bear.

one of those Disney princess which her mom turn into a bear.