Just recently, I was on the US-Beginner server and I was born to an eve named Straw Berry (hi mom). She named me Banana Berry, though I couldn’t really read the name, cuz it was in another language (she told me what is said).

As soon as I was born we were on the hunt every eve takes, the hunt for a good future home or if you’re lucky, an abandoned village. She quickly caught yellow fever, though I had grown into a child so it was okay. I fed her and we were back on track.
She had my little bro( love ya lil bro)a little while later, too, but we were still searching for water, so we kept going.
Me and bro kinda stayed back cuz we were hungry and waited for mom to come and get us. Out of nowhere a bby runs up saying “f” and I quickly feed her. She’s my little sister and it turns out mom is dead. She was killed by a boar my sis told me, but she also said there was water.
So before we left for our new home I noticed my lil sis was nameless. I picked her up and named her Hope, as she was my little hope that we were finally finding water.
Once we got to our new home the first thing I did was place a home marker( I’m good at getting lost), my bro started getting soil for a farm, and my sis was doing whatever a child can.
That’s when I had my first child. He was a sweet little boy I named Reed. I promptly told my sis she was an Aunty and my bro loved the child. They all said he was cute

I kept having children after that pretty non-stop. My sis was getting bananas for me and the fam tho so it was fine.
It was fine until we were both having children. And there was too little food. The farm wasn’t even finished

It was hard keeping me and the little ones fed, and I starved. My sis was still alive after I died though. Its going to be alright, I hope.

Oh, if you were part of the family, say hi to me! You guys were all so great ilya​:heart:

Try to send your family tree, so we can se if we where part of your lovely life.

In the game. Go to the family tree that are you talking about, and them press the link bottom next to your name. After that you press the share bottom, and for iphone, you just select to send it true text messages. Copy the link that is shown and them copy it here.

This is a really long process, but at the end is worth it.

I spawned in and tried to build a pen out of snowmen, but a bunch of noobs/griefers ruined the whole thing and I ended up getting trapped and starved to death.

Awww, thats too bad. I guess the family isn’t too jolly anymore haha

I suspect it’s not in Singapore or us server. What server is it?

Beginner server is a nightmare for a pro 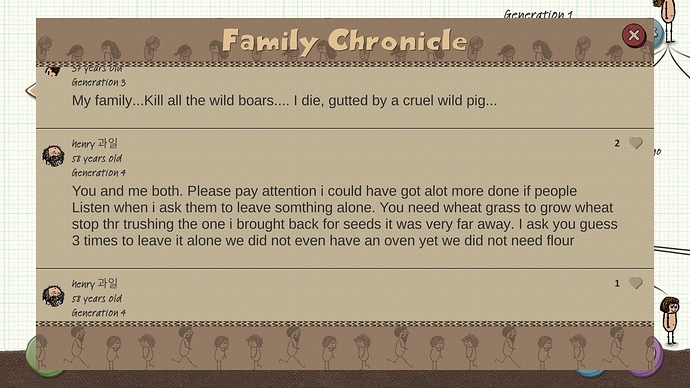