A legacy damaged but not destroyed

My life started, it was a beautiful town. It was neat and clean, there was a beautiful garden and a nice sheep pen.I got to be held by my great grandmother. She said that she was so happy to see me, she died when I was 1. My mom showed me around the town, I got to see the first Eve’s grave, and her three other graves from being spawned back into the same town. I was so thrilled to be born into such a nice town, with a great legacy.
Then tragedy struck! I saw one of the sheep loose, so I ran to the pen. The wall was broken and all the sheep were loose. I raced to make a rope, got a bowl of sheep food together, then brought adobe to fix the pen… it was going well. I almost had the roped baby into the pen, when a huge bear ran through the camp! It killed many of my family and relatives.
It was finally slain but the camp was a mess, we worked hard to clean it up and fix the mess. It was then we realized that many of our tools were missing. I spend the rest of my life trying to fix the camp, make food, bring soil, and raise my babies.
At my mom’s last request, she was lain to rest with a note that she was a survivor of the bear attack.
Those who survived and my children helped with cleaning and fixing the town, though some died young. After dying I saw that my youngest daughter had been killed by a bear. I only hope it was not caused by another troublemaker…

It was a great legacy, I hope its glory will be returned. 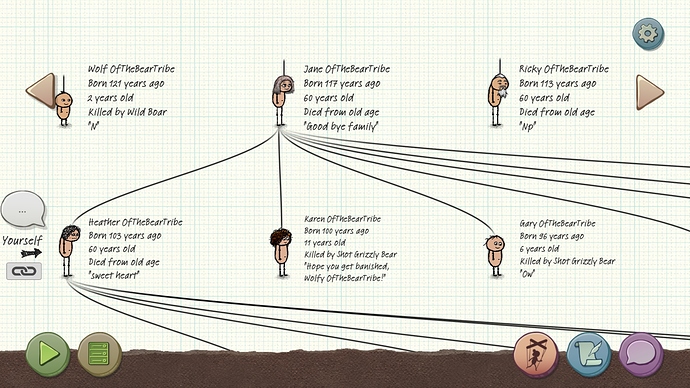 Update the family made it to generation 11 but then died out.
Hope a new Eve finds it and makes the town great again.

Yes, it was indeed a great town, great granddaughter! I died before the bear attack. Pretty sad, without the bear we would have maybe survived, but wel. Hopefully someone finds it back.

You maded a great town @Crazy_kvo . Thanks, even though the bear attack and troublemaker caused problems, it was wonderful to play in such a nice town.