It was 5 AM in the morning so Singapore server have a few people online. Around 7 people so it might be i will gain my luck to continue my solo town. But, no, I’m born in a family as a boy. Ah well, better live this life than to lose another eve spawned, right? I bring home 7 iron wrought so this camp will be a fine village. My mom busying herself to build a kitchen from adobe, so i helps her. After 54 years dedicating my life to this village, i finally die because of starving.

Later i born again as a daughter in another village. I want to suicide because i wanted to come back to my previous town but suiciding is very risky because i don’t want to lost my eve spawned. Then i realized that i was the only girl in here. So i decided to stay.

My mom named me “lucky”. She told me to survive and i say “i try”. In my first year i dedicated myself to make plate and bowl. My mom have another baby, it was a girl. So i didn’t have to worry about the burden being the last girl. But, hell, my sister die young.

When I was 7 suddenly a bear comes to the village. My uncle (i think) guide the bear to the north and didn’t come back. My brother makes arrow and bow in case the bear comes back. I don’t know how the bear comes in early village, i suspect there’s someone waking the bear.

My mom (which already old) goes to the north with a bow and arrow. She might be trying to kill the bear. She comes back a couple of times with empty bow. No bear in sight. She Wondering around the village and put down the bow. She gave me a clothes and say “lucky, luv you.” which I responded with “ily 2”.

I’m still busying myself making more plate when suddenly the bear show up again. Did someone guide the bear back? Luckily there’s object in my feet when the bear passed by. The bear have 2 arrow on it. Need one more arrow to die. My brother get a bite from the bear but he bravely guide the bear south. My mom pick a bow but no arrow left. So i pick thread and skewer and the other stuff to make new arrow. My mom pick the arrow. I go to south to see where’s the bear at. It’s not far from village so i guide the bear back to get it one last shoot.

My mom getting close to bear with her bow and arrow aiming at the bear bravely. Alas… She get bit. The arrow drop near the bear. I try to pick it up and the bear get close to me so I run back. Luckily i didn’t get bite even though it touch me. Maybe because i stand at my injured mom place. I try one again to pick the bow. I did it. I try to aim the bear but the bear get close to me. I don’t know how but I survive another bite. My mom turned to corpses and i can’t even say goodbye to her.

This is it, it’s time for the bear to go away. My uncle is near by and i still suspect everyone to be a griever that waking up the bear. So i decided to stand on rock so no one pick the object below me to makes me die. I aiming the bear and woosh i did it. The bear die. My uncle watch me and said “aigo” in hangeul after the bear die. That makes me to suspect him even more.

After the bear die, i skin it as trophy. 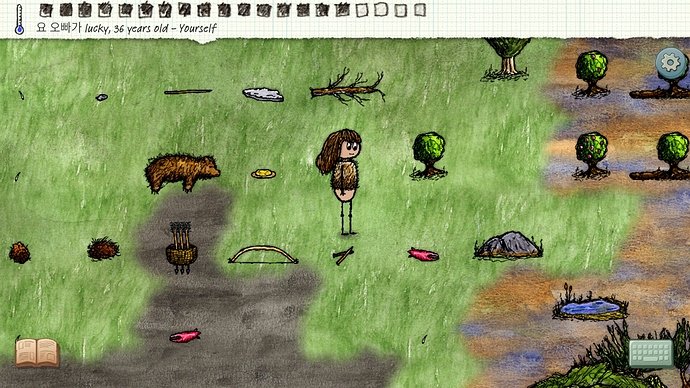 Turns out only me and my uncle survived. Everyone die. Luckily, i was a girl. I was around 17 and it’s time for me to have kids. I have a boy and breastfeed him. I still suspect my uncle so i should be watching him. I hid the bow and arrow just in case.

After a couple of years with my uncle, i realized he was a good man. He was old and told me “i want to reborn as your son”, i tell him “i hope you are”. Well, i know a trick about killing someone so he will come back to the same village but it’s still a myth so I didn’t kill him. He die starving and never came back to me.

I have another baby but it run away. My daughter (lucky) have her first baby but he run away too. My other daughter (esmeralda) is nowhere in sight. So i go to finding her and found out she was at west not far from home. She was sick with yellow fever. I fed her and she thanked me. And she goes north after she healed and never returned. That was the last time I see her.

My lucky, my daughter have a daughter and she was my brother incarnation. I told my granddaughter that I killed the bear. She said “good”. I finally can relax that we have a baby girl. But it didn’t last long. After my granddaughter turned 5 she was trying to smith. I thought my brother is pro but he’s another noob. How can I tell? Because she didn’t put blower in klin and try to light the coal. But she’s forget to eat so she died. There you go another worry about the end of the village.

My daughter came to me, i was old. She have a baby, a girl. “hi baby.” i said, but she didn’t respond. “my mom” said my daughter introducing me to her baby. She put the baby down and… She run away.

We can only stand there without word as the baby go. 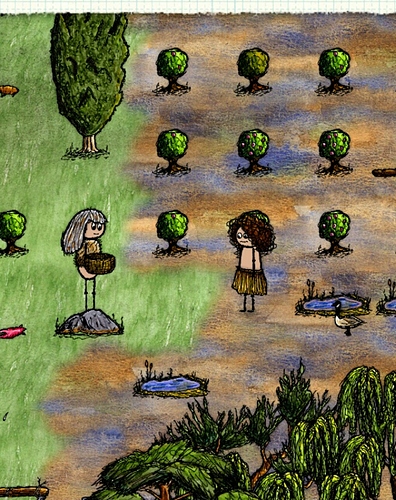 I was 54, i was thinking about something so i didn’t move. My daughter (20 something) thought i was going to starved myself. So she came to me and said “don’t go”. So i said to her my last words “I won’t go. If i go you have to stay here. You should have a baby. If you turned 40 and still didn’t have baby, you can go.”

“there’s not much people in server” i said “there’s must be a better village” ( i remember about my last village).

I turned 59 and she finally have her baby. It’s a boy. I checked my daughter age, she was 36, there’s a chance of her to have another baby and I hope it’s a girl. 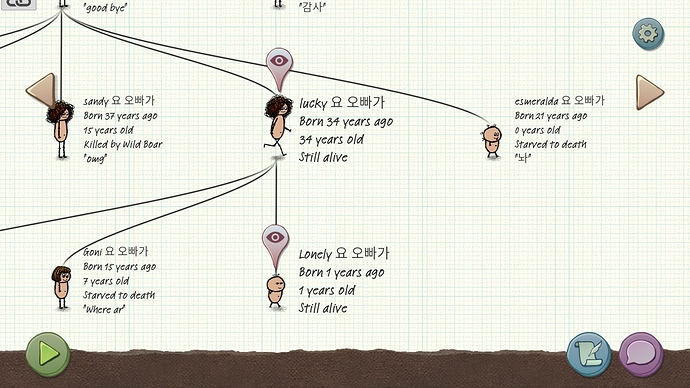 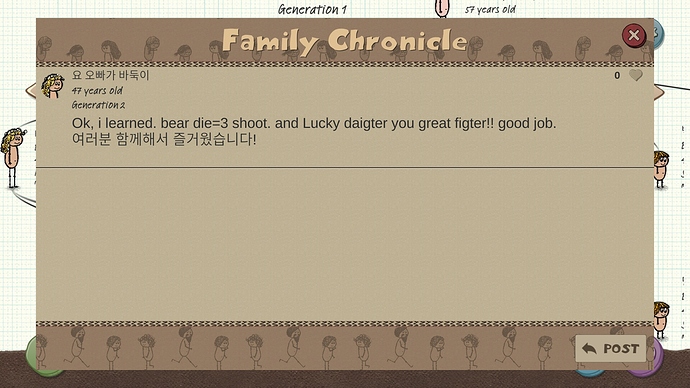 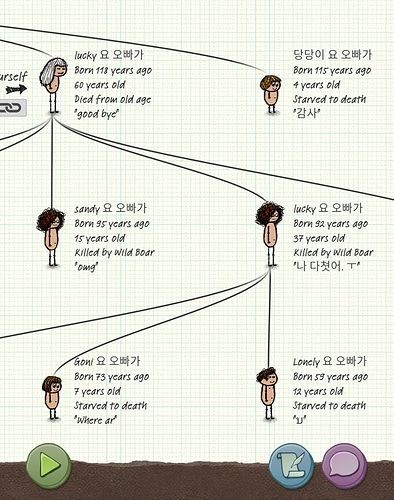 Hmm… A little fact is wrong. Sorry. My daughter is sandy not esmeralda. Esmeralda is the suicide baby.

And my daughter is around 32 not 37 when she has the last boy. She named him “lonely”.

Aww what a bittersweet story. It is indeed hard to keep a village going with new people, hah

That’s such a sad story…