Well, i see that eve spawned didn’t work so the consequences is we have to start from scratch more often. My mother is an eve we have to build from scratch. she have me as the only daughter and after a couple of years of me having son, i finally have daughter in my 39. When i turns 40 i can’t breastfeed my only daughter and trying to feed her berries but it’s too late. My son who knows that my daughter was the only heritage of the town decided to suicide because there’s no use building big town since there’s no heritage and eve spawned didn’t work.

Then, i born again as son of an eve. Helping her from scratch again. She have a lot of daughters this time. I died by animal.

Finally, We born again in the new village. I born in a quiet nice camp with a lot of iron and berries farm. I busying myself helping the smither. We slowly run of soil and the farm is neglected. As the tool ready I’m trying to build stall but die starving. I born again in the same place but have to wait old enough until i can carry those rock to continue building stall. I died starving at 17 because literally no food left.

Then i born again as eve. GEEZ, i have to start from scratch again.

Same. Exactly the same. Today I was finally lucky enough to have 3 eve respawns to my surprise instead of the usual 2. And this helped my family SO much. We ran out of baby girls but luckily I was able to respawn and populate the town again. The more crowded the family got, the more fun it was. Everyone was running around helping each other, reporting trolls, etc. No babies suicided because imagine how refreshing it is to see a nice flourishing village instead of being born to a lost eve without a home again.

The family finally ended when I was unable to respawn and we ran out of children again because the server was a low population server. The remaining boys killed themselves realising there were no girls.

We ended up with 60 iron ores, all tools, newcomen engine, sheep, a huge farm, and enough food to feed generations. 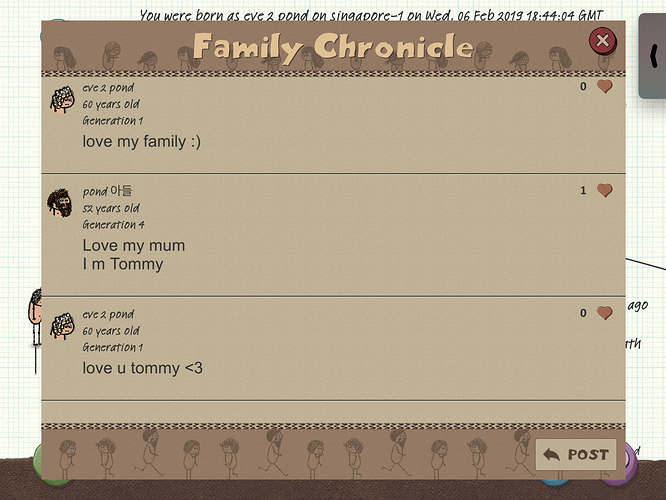 I wish the devs/jason would give a feature more then 1 week of working before changing it again. Yes eve spawns may have increased baby suicides and baby abandonment but who’s to say it would remain that way after the “trial” period.

As I understand, Eve spawn went for a long time on the PC version. Jason also introduced the /die command which will instantly kill a baby in it’s mother’s arms and she’ll be holding jiggly bones.

A baby using the /die command is then banned from that lineage so as not to have a rash of suicides by the same player.

The whole solo play thing was never meant to be a thing. That may be, in part, why Eve chain spawns were removed though I can’t be sure.