Done with this game - Griefers

I’ve tolerated many forms of griefing. When they bring bears, I lure it away. When they hide items, I spend my life searching for them and putting them back in place. When they try to eat up all the food, I grow new crops as fast as I can. But killing, killing is the one thing that irks me to my core.

A griefing in today’s game was the final straw for me. I was born to a nameless mother whose job was simple, maintaining the huge berry farm we had. She was new to the game, yet she was happy with her job. She even joked about how she almost forgot to feed me because she was too engrossed with watering the bushes. While everyone else was fighting to smith, or ride the horses, or make newcomen engine parts, my mom was happy doing the simplest task and I loved her for that.

She went away to get another bucket of water, but suddenly came back with a knife wound. She rushed to me and her only words were “she went left”. I followed her directions and saw a woman holding a bloody knife.

I ran back to the village and warned everyone about her, but no one believed me. Her mother defended her precious daughter whom she entrusted the knife to. The murderer even came back and accused me of being crazy, and killed me for spreading these “lies”. When viewing the family tree, I saw she had killed 2 other family members. 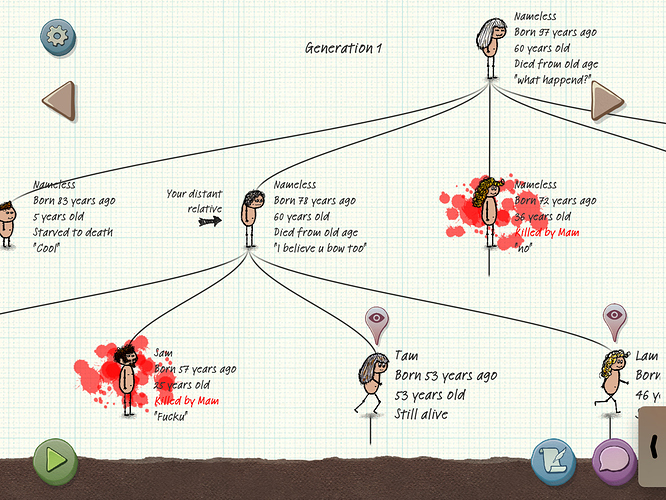 How do griefers do this? How do they get pleasure from killing innocent players who spend an hour trying to build a home for their children? Then continue to lie and kill again? Just the thought of it makes me physically sick to my stomach. Are these sick-minded people what the world is filled with?

It doesn’t help that the curse system is basically just a way to placate the players who complain about griefers, without having any real effect or deterrence.

I used to be able to tolerate it because I would hop into solo play for a while to regain some sanity in a peaceful world of my own. Now that its gone, I feel like I’m losing my mind. This isn’t healthy anymore. I broke down after it happened.

To my nameless mother, I’m sorry I didn’t protect you.

You had a good and a bad life. This is the beauty of One Hour One Life.

I can tell you with the bottom of my heart. This is a problem that we have since the binging of the game. Jason din’t want to do anithing about it. I have been killed numerous times. I had fighten in the greatest war.
The solution for this is to get everyone armed. The more people with knives, the more intimidating and challenging the game is… Na! Im kiding…

Play in the beginner server. Not killing is alowed there… I do it all the time, and Im a pro…

An armed society is an prepared society. Truly, with the level of advancement I’m reading about here there is no reason a number of trusted players shouldn’t have been armed with knives. The new snowball mechanic, if there is snow nearby will shorten the stagger period for a killer but it will also make them drop their weapon.

What server were you on Mei?

A lot of killer this game ! This is my best friend family and troll is come to kill all and come back to kill again and again 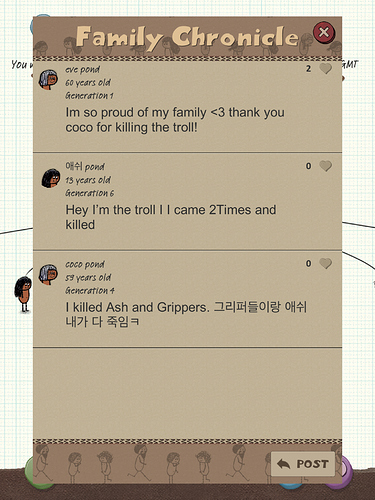 I feel like I’m losing my mind. This isn’t healthy anymore. I broke down after it happened.

So did I. If you haven’t already, read this thread I made about a whole bloody incident that happened me.
https://forum.onehouronelife.app/t/wanted-sicko-mode-jumbo/3533?u=wumbojumbo

it’s funny how some griefers are even bad at griefing

. when your skills don’t allow you to play the game in the right nor (in this case) the wrong way - just let it be. and please don‘t say you are a new player when you are in fact just a bad griefer. there are better noobs in this game than griefers.

please don‘t say you are a new player when you are in fact just a bad griefer. there are better noobs in this game than griefers.

You make it sound like it’s directed to someone specifically.

yes a griefer on europe-2 he was bad though

a griefer on europe-2

He successfully killed one of my family members not too long ago.

a good griefer is the last man standing. this player has to step up its game

he even got killed by his own bear

Wait, did the griefer want to commit suicide?

he said that. but actually he grieved in the next city also.

Yeah, I must’ve been observing you, but I didn’t know that it was you. What a small world we live in!

its nice to play with you. you are a good guy wumbojumbo.