This time Life had other plans for Joshari.
Joshari found itself born to a unknown mother, who just ran off. So Joshari resigned itself to die in a heart shaped area.
Then Life decided to give Joshari a second chance, and gave her a form of a Eve. She knew instantly that there was a road that would lead to people possibly. So she started on a Trek to find that road. On the way, she saw signs of people, but not what she was expecting. Then she had a daughter, whom she named Kira.
Joshari did her best to care for Kira, and found a small village on the way. There they debated if it was a good village, but it was decided that the road was the better option. So they headed out.
On the way Kira got killed by a wolf, and Joshari was so sad. She vowed to come back and bury her daughter.
She then started heading a bit north, when she came across a trail marker. She followed the marker until she found the village, and discovered that if they had only went north, Kira would still be alive. That hit Joshari’s heart. So she found a basket and went back to find her daughter’s bones and then headed back up to the village to bury Kira. She placed the bones on the ground, got a rock for the headstone, and even got Kira’s crown to all bury her properly.
After setting everything right, she started to look for a shovel.
Joshari had searched the village for people before doing anything, so after not finding anyone, she had rang the bell she had found. It made a loud bong, and caused her to cover her ears for a minute. Then Joshari looked up to see that the bell was now crooked and she briefly wondered if she broke it.
Then Joshari went back to her search for a shovel. It was then she saw two people and her first thought was ‘People!’
She was so happy seeing other people that she missed the knife being drawn against her, and didn’t have time to react to protect herself. The next thing she knew, she had a stab wound, and she was bleeding a lot.
Joshari looked at the other woman, who was holding the knife, in shock and confusion. And Joshari noticed that the woman was wearing Kira’s crown! A flash of anger shot through Joshari then, as the woman was wearing something that belonged to her daughter, but then resignation set in, and she knew that her daughter had no more need of things like that.
Joshari sighed and stumbled back up to the bones of her daughter and died right next to Kira’s bones.
But Joshari, the soul, wasn’t done yet. Not with that woman. There would be a day in which it knew, that it would remind that woman of just that day. Maybe they could resolve things in another life. 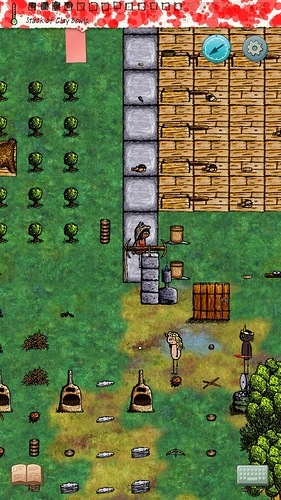 I’m pretty sure you stumbled upon one of The Fellowship’s villages.

fyi, Joshia is in fellowship and she is stabbed by Chinese griefers because Joshia ring their bell

What a sad story Joshari!

The one with the knife spoke English. Said, “I’m the Eve!”

just like me, i am chinese too.
i speak Chinese with them twice