Is it just me who finds the control strange?

maybe it would be a little better if you could work with 2 finger system?
eg. hold a thumb somewhere on the screen and with the other finger presses on the desired area to store things or to exchange them

and if you click on a desired area without thumb on the screen, you use the item you have in hand or pick up things with empty hands

to put on your clothes, hold a thumb on the screen and click on yourself with another finger

Thanks for the feedback!

We think the biggest problem with the gesture control is that we have not had a proper tutorial for it yet. But we will have it in the game in the next update. So hopefully it won’t be a problem anymore for new players.

Currently the game may be played with only one finger/one hand. With a two finger system you are forced to use both of your hands. Unless there is a strong reason we don’t want to impose restriction on our players. Another reason is handling two fingers is more difficult than only one especially on some Android devices. So for the time being we will keep the way it is.

really a pity to read this answer. In many cases, you keep your smartphone in both hands anyway, for example. while writing etc.

At the beginning I tried instinctively with both fingers to try something. I know no application where you better not both hands should use except for a voice call: D

for me, control is more like it is at the moment, an imposed limitation

this wiping system on desired fields is often very annoying, instead you could also implement a virtual interaction button somewhere on the screen. but it would also be a good idea for a player to decide which of the two actions should be applied to this virtual button (like left or right mouse click)

that would at least be an optional alternative to bring the feel a little closer to the PC version. and with one hand you could continue to play if that is in the sense of the developer

Only problem to me with controls is to combine small items

I’d say the same. The pc controls are pretty much point, right and left click so having a basic swipe up/down or onto something gives the same experience

I think 2 fingers on the entire screen won’t work because you want to combine or perform actions on close things to you character then you will be squashed for room.

Having a seperate spot with a “control” omit makes sense but don’t know how good it would be in reality - certainly movement would be easier and you would be less likely to run into dangers on a screen covered by your fingers as you constanatly Tap or hold where you are moving to.

I still find the 2 finger variant most useful, because a 1 finger variant with a possible fixed shift button as already said by Dudeoftheages could restrict the running.

At the moment it is like that if you keep your fingers on a random area in the screen nothing happens, it only happens when you let go or tap and hold again.

This hold at the beginning can therefore be used very well as a second mousebutton which is only executed if you choose to execute a target. eg. object, yourself, someone else and what you are holding in your hand etc. 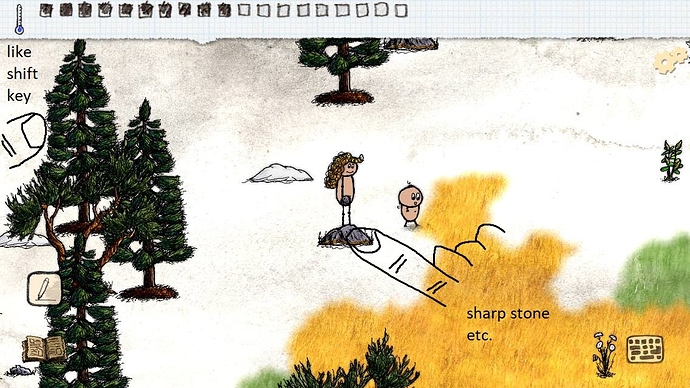 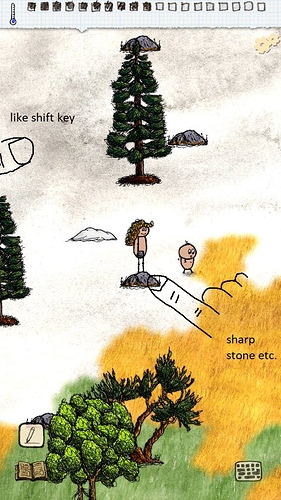 Yeah but you would muve

I was very happy when I knew that onehouronelife also comes on mobile devices. but the control has unfortunately been redesigned in comparison to the pc version. if you had to play in this way on the pc, then it would be just as unpleasant as I feel on the mobile devices. is it so outlandish at least on the screen 2 touch fields more for left and right mouse button to integrate?

then you would not constantly press in the middle of the picture and wipe. and see more of the game

Yeah, it’s a little outlandish now that the game is released and is getting quite a large number of players. This might have been a good thing to try out in the beta, but it’s a bit too late now. People are already getting used to the controls. Changing it right now is too risky.

That said, I also don’t like the controls, it’s not precise enough – in the way that the system should know what I’m trying to do when I’m holding onto a sharp stone when I’m in the vicinity of the reeds…

And I’m sure the controls look good, and I’m used to them. …