I’m really mad. Like REALLY REALLY mad! Is it about a greifer? Well, no.

I was born into a nice family on europe server. (has less people and I like it). The people were friendly and yeah yeah.

I became a nurse, made myself a nice little apron and some wool pads.

I decided to make a hospital to store all my stuff, I used some stone blocks that no one was using until I could find some big hard rocks. Little did I know one of those stone blocks was part of the sheep pen. Oh no!

I did not even realize this, no one even told me. People kept talking about a griefer, though, but I assumed it was just someone.

Then, a girl got a bow and said she will kill the griefer. Hoping I could help by cursing this griefer, I asked her who it was, and my only response was an ARROW!!

After dying in rage, I used the stalker thing to watch her, and thankfully a nice man stood up for me after I died, :,) some other girl became nurse and I’m sitting here mad and typing furiously.

Am I a griefer for what I did or not? Did that girl do the right thing?

How did she knew that it was you?

Probably saw me do it or heard from someone

was your name lily?

Nope, it was Mei, not kidding lol

i was the eve of that town… turns out it was a misunderstanding, sorry. she thought you broke the pen on purpose because some griefers do that. the whole town was on edge at that time because there was talk about someone wanting to kill people. thanks so much for making the medical supplies, though! 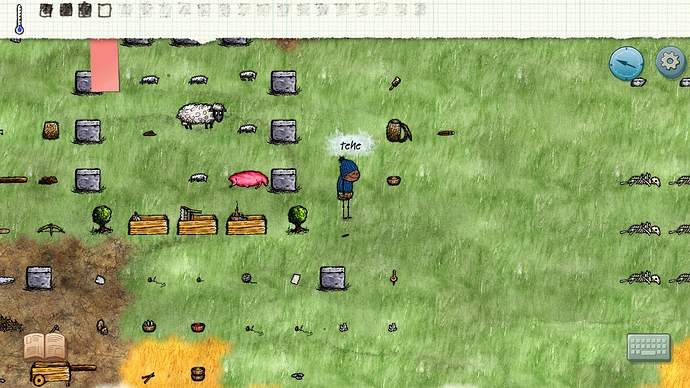 I was born before you and watched you build a hospital. You were that blonde girl with red cross apron. I was old lady that keep asking you where the hospital is. You said it near the sheep pen. You were very nice and dedicated. You said to me you want to build it somewhere else.

When i was near the sheep pen. I saw you holding a shovel and dig the stone. I’m assuming you didn’t mean to do that because you were nice. I was trying to fix it. But I’m too old and die at last.

Later, i born in the same town. I see my mom said you were a griever because you broke the pen. then she shoot you with arrow. Someone trying to heal you but she didn’t took the arrow from your stomach so you died. When my mom keeps telling to people after you’re dead that you were a griever, i finally able to speak 2 letter. And told my mom you were a nice girl.

My mom feel sorry after that.

Oh hey! I was born into that family too lol. I think it was a few generations before you but I’m not sure, forgot the family name. I made lots of soup, a few piles of compost, and helped with pies on top of taking care of not only my kids but other people’s kids aha. Nanny chef. I had been given a knife for safekeeping in my bp and had a girl demand it several times tho, which was kinda weird, but other than that it was a really fun life.

were you the last survivor? i was watching you lol, getting the anti venom from the horse haha

@Mei_65 I am. Haha. I didn’t know that someone watching me, especially the eve. At least someone know where the horse dead so we can take more anti-venom. Not sure when it will decay tho. I hope we can back to Pond town again. (i starting to regret naming it Pond town, i like PONDVILLE more)

Your stew is very helpful and yummy. Thanks for you, i learn how to make stew from turkey bone. I thought it just a trash.

Something similar happened to me a couple days ago.
https://forum.onehouronelife.app/t/wanted-sicko-mode-jumbo/3533