How to hunt bears

They are found inside caves such as these 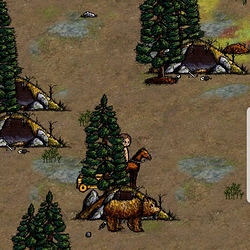 A bear will always move 2+ tiles south of where it was released after a few seconds.

Bears can always move 4 tiles in any direction at a time, if an object is in the way of that 4th tile however the bear will move over all the objects beyond that 4th tile. A bear cannot stop on a tile occupied by another object. A bear will stop short if a wall like object is in its path (Tree, fence). Imagine it moves like a queen piece in chest.

If a player is standing closer than 4 tiles near a bear , it will stop on the player. If you end up on the same tile as a bear it will attack and kill you!

You can avoid this by standing on an object or you could also ride a horse. You will be safe on a horse when it comes to bears. 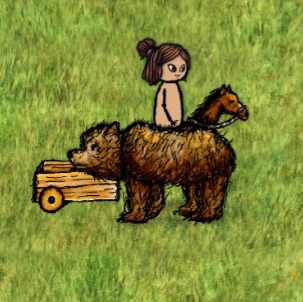 Since you can lead bears to a location I found that it’s best to set everything up in one spot reasonable in the center of all the bear caves you are hunting at. In order to take down a bear you need a Bow and 3 Arrows. Then to skin a bear you need a knife. To be safe I set up my hunting sites like this 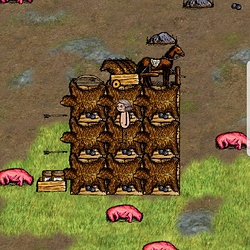 and 2 stones on each space so you can’t accidentally replace them.

To kill a bear you must shoot it with 3 arrows, the first time it is shot a bear will only move 2 tiles at a time. After the 3rd arrow the bear will move away from you and die.

Just stay within your hunting site and lead it while on a horse. You should be guaranteed to live. Bears will respawn after one full day from being released.

If you don’t want to run around looking for food I recommend getting at least 2 clay crocks, 2 plates, 2 paper and a bowl. Make them into two containers and use the bowl to collect blueberries.

Since your hunting site should be in a badlands and those contain lots of blue berry bushes!
You need to collect from 2 blue berry bushes to make a full bowl and put them into the containers.
Each container can hold 5 bowls and that should keep you barely fed enough each time they are in season. Wearing clothes would help a lot with this too.