I cried so hard of laughing

So I spwaned in a little Japanese town, my mom left me in the nursery once she had me, so I decided to be better to my kids since I was a female, I had my first and second all the way to the fifth, I would make them clothes feed them even if they got bigger.
One of my children was a boy, the only boy, I named him “Handsome” and took care of him.

At the age of 40 I decided to make stew and so was my son.

He kept taking my stuff and continuing it on his own, I thought what a nice person, but then after a while later …I made another (stew bucket thing) and wanted to stew by myself.

He kept taking whatever veggies I was prepping and I told him to stop!
He wouldn’t listen and ended up calling me a b***…and said f*** you…
well you know …I was like well maybe I upset him,no?
He said I hate you, and I hated myself for it
How can my own son hate me like that and I decided to be the better person
“I love you I said” while I put the stew bucket down giving it to him,
“here take it, are we friends now?” I asked…
he said “no…”
and I asked again… he said “NO! … "
I got furious !
I said” well, f*** you"
After a minute of us arguing he just up and left ok
And I had to get my revenge
I took the clay bucket and ran far far far away
and threw it in the middle of the desert
Came back town feeling satisfied and made clothes for newborns
Untill…
I found him making an arrow…
“You want to kill me right?” I asked
He didn’t answer but I knew oh I knew…
So I imediatly snatched the arrow!
He came running after me
I was laughing so hard I could barely see the screen
While running he stopped to eat
Little did he know I had my screen on wide view
AND I SAW THE BOW AND SNATCHED IT!!
MWAHAHAHAH
at this point tears were running across my face from laughter I started running after him
And he kept running in circles and everyone at town was watching… I kept typing in “hahahahahahhaha” cuz I was dying of laughter yall , at how it all turned on him.
I started explaining the situation to the other villagers but well not much of them spoke english
I found an opening and struck my arrow through his heart
And the town protector killed me imediatly
Such a fun play … 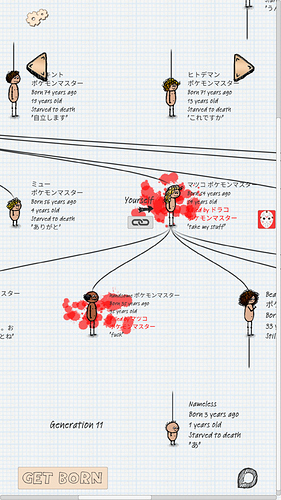