Once upon a life time, I was born from Eve. She was kinda noob and the place she pick is not really good, it was in mountain where wolf foraging near. But we stay anyway. After helping her build an oven, I found my mom dead. Because I was a boy, I decided to suicide.

In my next life, I was born Eve and go randomly searching for a good spot. My fate brought me to my old village. I remember it vividly, it’s a bad spot but my heart already put on it. So i decided to stay and make a nice small farm. I don’t have any children because they all decided to go. After my farm is finished, I went to collect iron. I brought 13 iron back home. Nice! But not long after, I accidentally died of starving. There goes my lovely small village.

Later the same day, I decided to play again. I was born eve again and went randomly. What a luck, I found my village back. So I decided to stay and makes some tool from iron I collected in my last life. It’s a hard time for me because I’m alone. But not for so long. My first boy is born, I named him Mario. I really love him because he helps me a lot. He cook soup, he water the plants. I love him so much. Not long after my second son is born, I named him Sen. He was really active when he was young, running here and there but stay nearby. Very smart little boy.

When my second Son, Sen, grow up. He helped me build a pen. He collect wood for the pen. I love him so much too. But he died shortly. Mario came to me and said “my brother died” and I was heartbroken. He die of starving when helping me. I pick his corpse and planning to tell my last goodbye but suddenly, I have my third Son. I’m so happy because my Sen probably reborn to me again. I named him Josh.

Josh was playful like my Sen. But he a little bit off. He didn’t follow me like Sen did. But I didn’t mind at all. When he turned 3 he said “TY”. Sen or not this is a sign that he will be a good boy. But, I’m wrong. I see him trying to pick a bow. I see him trying to pick knife. So, I hid them. The next thing I know, Josh was attacking Mario with snowball, Mario died. I’m so angry that I pick my bow. Trying to shoot him but I miss. I lost my arrow. So i picked my knife and try to kill him with it. My hand slip, the knife dropped. Josh picked the knife. I run away.

I make another arrow and found a hard time finding my bow that I hid earlier. But I eventually found my bow when I was around 45. My food bar is decreasing but I thought to myself it enough for me. Finally I spot josh in the berries farm. I shoot him with my arrow. He cursed me so I cursed him back. My hand is in red and it stay that way for a long time. Too long that my foodbars is running low. My hands still red and I have on bar left. I died of starving. My beautiful village is gone. I don’t know if I will be able to found it again. 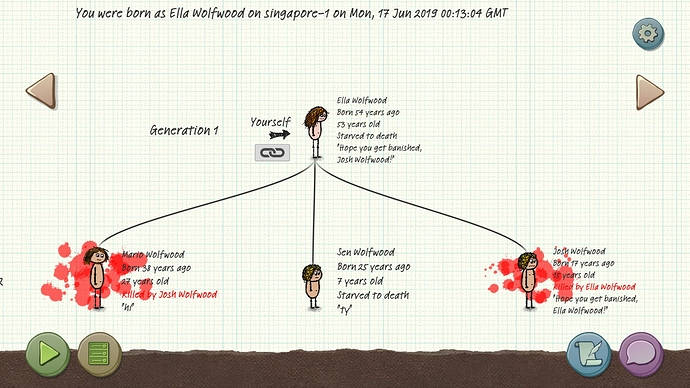