My first kill and ive got the griefer 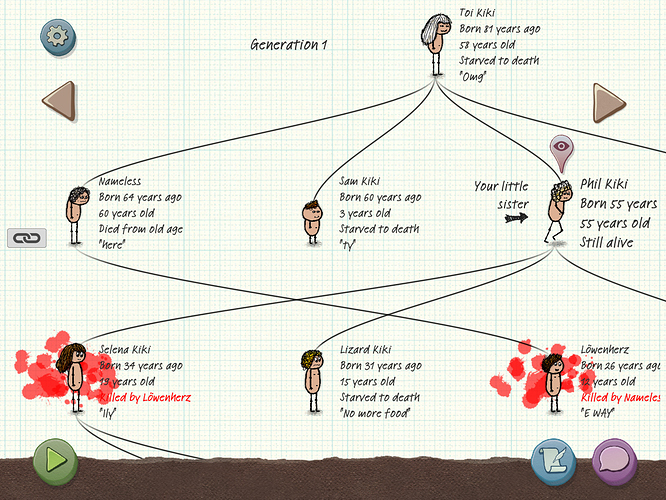 my approach to the game is to dont kill anybody. everyone should have a good experience with the game. after playing this game for a half year i was done with griefer. and today it happend. i killed a griefer.

i was born to this lovely town on europe-2. my mom was nice and did a lot to get the town running. she did a good job at the bakery. i had no kids for a long time. i got a son when i was almost 40 years old. i tried to feed him with berries by the farm so he will survive. my sister was nearby and had a kid too. we were lucky. she said she will feed the baby for me. she was such a nice sister.

after a while my son was old enogh to make his own thing. he did manage to get a bow and an arrow. he stood by the farm with it. people were asking why he did that. he had some lame reasons. and he didnt go away to hunt or something. he was just standing there by the berry farm. and suddenly he killed my niece. he said it was an accident.

he didnt hide. he just stood there and tried to convince us. it was such a lovely town. and i hate it when griefer try to sabotage this. i knew there was a knief in town because of the sheep pen. i was frustrated by all the kills and griefers in this half year of playing. and then i did it. i cursed the griefer. got the knife and killed the griefer.

this is how i killed a player the first time. its sad i had to do it. but it means vendetta from now on. no more griefing!

Yes having multiple people armed helps deal with a murderer quickly. The best time to get someone killing people is when they are under combat stress.

Have someone risk getting shot/stabbed so the murderer can be dealt with, like a game of chess. They go for a pawn and get slayed by a knight.

I bet that this was the same griefer who claimed he was new and wanted to suicide.

And how many of you cursed the griefer?

Did the lineage end there?

Or how many had a curse token available and used it.

@WumboJumbo yes i guess it was the same griefer. he talked in all caps like the last one. there were two female characters who could let the lineage go further - my niece who got killed and her new born baby girl. both didn‘t survive. so there was just me and my sister left. both over 40 at the time. so yes the lineage died at this point.

@Christoffer there was just me who cursed the griefer. i dont know if the others had a token left. in the aftermath he wasnt sent to the donkey town but at least he wasnt a threat anymore.

This is where the cursing system fails. Not because it wasn’t good enough. Moreso because people are not effectively using the system. When there’s a griefer in town everyone alive at that time can and should curse them. Babies and toddlers may have to wait a few years, but they should be brought to the griefer’s body (if they’ve been killed) to curse them.

I have been in far too many situations where there are MORE than enough people to curse a griefer into donkey town and only one or two actually curse. The rest are ambivalent, have used their token on petty cursing (I wanted that backpack! Curse!), or just don’t care because they werent personally affected during that grief. Next thing you know, poof! The griefer is born right back into your village!

I don’t know who I was just playing with but it was the finest example of organized effort against a griefer I’ve ever seen! Everyone cursed, and alerted others to do the same, which they did. That person won’t be seen in game now until they work off their Donkey Town sentence.

The curse system works, provided people use it properly. It never needed to be made easier. People need to be educated on using it effectively.

Curse system also fails on pkk and griefer kills when multiple people witness it and understand the situation but then you have lots of random players who didnt see it run up and curse you because of your bloody knife. Even though they witness someone feeding you and every body saying pkk

And that’s yet another example of it being used ineffectively.

These are all growing pains. Nothing more, nothing less.

If someone is standing around with a bloody knife then it’s not an automatic curse situation. This is the opportunity for the villagers to hold their “trial”. To hear from witnesses and the accused. Then they can make an informed decision as to whether they should curse that person or not.

It’s incredibly disappointing to see so many people demanding “fixes” for things that aren’t broken and complaining about not having things precisely the way they WANT them to be. The game creator had a vision and made the game according to his vision. He doesn’t capitulate or compromise with the very reluctant exception of Donkey Town and things that make sense to him, say… stacking objects.

While this is a multiplayer game, and the code is open source, it IS NOT intended that each and every player turn it into what THEY want it to be. What chaos.

It is beyond disappointing to see people attempting to manipulate the devs of the mobile version to bastardize the game for their own selfish interests. Particularly when it is not related to actual in game problems but, rather, to serve their own personal game play.

I see people now saying they aren’t playing anymore (when we all know that’s not likely to be true) and now demanding their money back? Guess what? You don’t get to demand your money back! No… my bad. You certainly can demand all you like. You paid for a game. One that evolves. You got it. You’ve got no case or reason to demand your money back and your extortionate attempt to manipulate the devs to do your bidding is futile and sad.

Nice story, but since when does europe-2 exist?

Yes I agree, no one deserves any money back it’s 5 dollars and less than10 with add on. With the hours people spent already playt it it’s fair to say everyone got there money out of it.

since when does europe-2 exist?

Oh… weird. I dont even have it.

which language have you set in your setting? i have english and german and i see this sever.

Intresting! Never looked at the settings. Somehow it changed to europe-2 or europe-1 never existed!

Oh… maybe thats why i was confused.