Congrats on the release.

Today I started a new area on the sg server

After 2 lives building my home I had a son… and I called him melvin. Melvin was very new - and special… after explaining to him farming carrots twice over I left to gather resources. When I came back I found him sitting on the farm eating carrots as they grew. He contently left the other 4 rows to stay unused while eating his carrots.

He also had eaten all the berries in the area and other food I had gathered.

I asked him - have you just been eating carrots this whole time? He said “only as needed”

He then asked me if I could teach him something. I had spent most of my life teaching him to farm carrots so I informed him to farm some more for future generations. I mostly walked around in circles returning to eat the last remaining carrots.

So I thought I would test my arrow on the nearest living thing. Melvin had the gall to say it was unfair!!! I spent the last 40mins teaching him how to play and all he did was consume everything in sight without adding anything to the village (my other son Victor in the mean time was born - and didn’t do much besides explore - which I was happy for him but he did succumb to starvation after victor ate all his food) 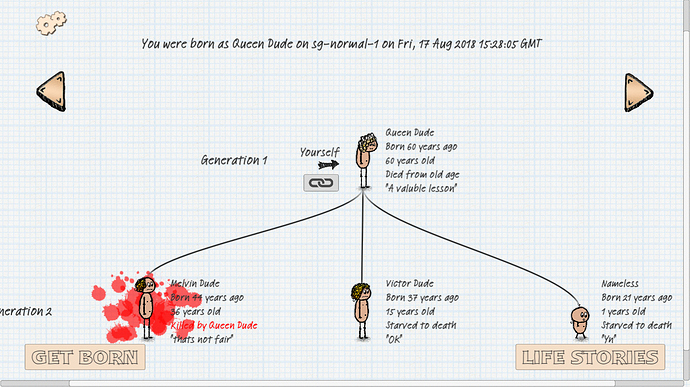 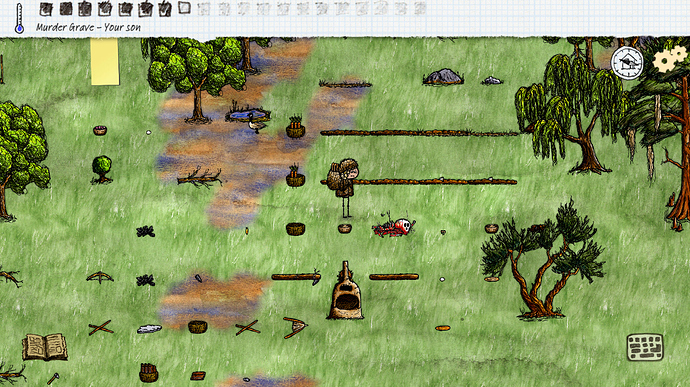 I spent a few more lives there and was well into smithing with about 12 pies made for many lives to come.

Then - a new eve came across my village. She offered to help and new quite the ways of the world.

Soon though she bore 3 children who seemed rather amused at their new life. I died of old age and expect not much to remain of the site when I reincarnate again

(I wish people would you tube how to play

omg i knew it was you ! haha! I was the eve hehe. Could tell you were getting quite frustrated with all the new players. I taught my daughter how to farm and make pie, so she continued making pie. In the end, it was only me left bc i rebirthed. I mostly just tried making a sheep pen and completed the berry farm

I’d like to look at the family trees you guys had too. Could you post the links here in the forum?

Yeah sorry. I think I was a bit grumpy at that point - and when I wrote this (I did just turn 60 where you are allowed to be a grumpy old fart)

But yeah I went back just now and cleaned things up a bit. Sorry for any babies I let die during my last run… just needed to sort some stuff out in a hurry.

it’s alright! everyone has bad days haha. As for the family tree… well it isn’t much. the third child dude saw was actually from another eve, so you can’t see any of them

*edit … ican’t seem to open the family tree o.O but here’s a pic 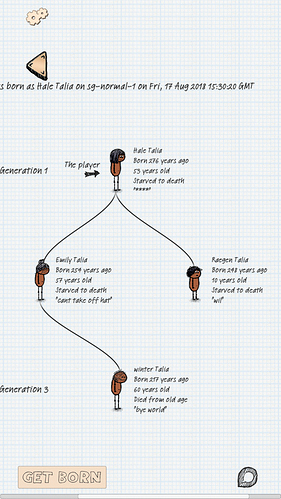 I edited your post a bit and added “Family Tree:” before your link. The forum is “smart” and if you let a link sit alone on one line, it tries to resolve the link and bring in images, etc. This messes with the logic. So when you post a link to a family tree, don’t let the link be alone on one line