Ok here goes my first attempts on the game:

1st: I spawn as an eve and didn’t know much about the game apart of living off with wild berries , carrots and bananas.

2nd: i spawn in a small village with a forge , it was a poor village without the necessary materials such as fertile soil to sustain the needs of a village but at the time i found it amazing because they had some stone tools i could mess around with. But soon i died because we had no food left.

3rd: i wanted to spawn back in that village because i thought i was just incompetent to find food by myself so i quickly found ways to kill myself.

4th: i spawn in an a small town , it had a sheep penn, iron tools and i was so excited to grow up and play with these players that could make iron tools and learn to use all those that were all organised in wooden boxes , it almost seemed like i was dreaming.

But i was welcomed with a grim question;
Mother: code?

All of my excitement vanished instantly , my hopes of learning … All gone in an instant.
But i couldn’t give up yet!

I make a pitiful attempt;
I try desperately to communicate.
Me: U.h.m. W.h.a.t.?

Mother: picks me up again you don’t have a code.

After my mom left me to die i quickly went to other people to try making them feed me.

The guy feeds me a berry and asks for my name , but my mother comes in and tells that person.

Mother: he doesn’t have a code leave him.

The guy was forced to obey and they left me on the ground.

A third person comes in and tells me:
“Ahah lol you die”

I couldn’t give up after hearing that.
I decided to scan the village , i thought that maybe i could attempt finding that village as an eve.

My hunger bar had only 1 box left. I accepted defeat.

I admired the town as i was slowly starving.
So all i could do was observe.

I already accepted my fate but a millisecond before my screen turned black i could see a person conversing with 2 people:
“Where is Shannon?”

5th: i spawn as an eve , and i met a person called [censored] , i quickly told him that i was trying to spawn in a modern town but they used these stupid codes. We had a plant , and that to infiltrate this group. We called the operation “Pies” , it was also our secret code to identify ourselves. I then proceeded to share my discord account info.
So then we could chat safely in private. 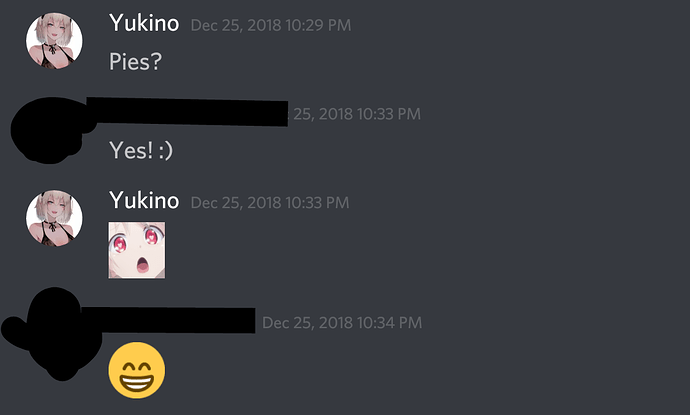 She then raised me until i could feed my own. I was now officially a part of them.

What should i do now? I asked myself.

Thank you for your concern but im already aware of that.
Those events happened at 24-25th of December so it doesn’t really matter if i talk about it or not.