DISCLAIMER: I know this is not how the game is supposed to be played, however I play this game quite a fair bit and had gotten bored of the same old cycle happening in every life (helping grow a mid-sized village using steel tools tech, later town gets wiped out by a griefer or a bear). I wanted to learn more about tools higher up in the tech tree. So, inspired by a post on this forum about someone creating his own solo kingdom, I decided to give this a go as well. This was purely for my exploration and for personal learning purposes.

Before this run, I had 2 relatively good runs, developing large towns with animals, all tools, etc. However in the first run I died by getting stuck in my own sheep pen (never again!) and in the second run, I died by trying to raise a piglet and getting a hog cut. I’ve also had really amazing moments, some which led me to tears of happiness, but that’s a story for another time.

This current run was my best run yet. I had, after a long while, created a Newcomen Multipurpose Engine, which I was so proud of as it took me 2 whole lives to figure out. 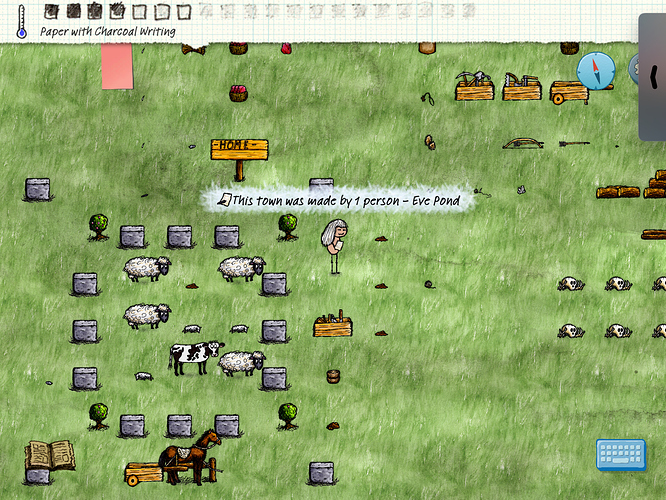 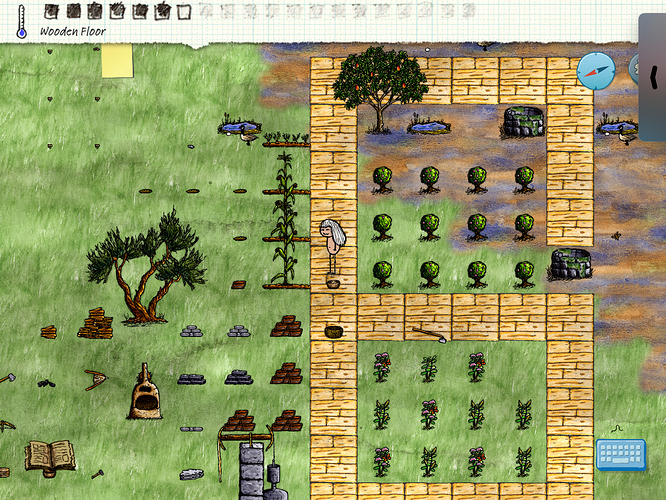 It wasn’t a huge place, but it kept me satisfied. I wasn’t short on food either. I had three whole turkeys, turkey broth, countless pies and milk to keep me well fed. I experimented with new things like dyeing clothes, breeding a cow, growing roses and a mango tree and making the Newcomen mechanisms. I had even begun to enjoy the routine of mundane tasks like farming milkweed and collecting firewood!

However, things started to feel a little lonely and I wanted to share my little kingdom with a child. I gave birth to a girl, dressed her in sheep’s wool and named her cotton. I hid my knife and bow just to be safe. She seemed like she knew what she was doing, but something was off - suddenly she disappeared on my horse for a long time. During that time, I died of old age.

When I spawned there as an eve again, she was back with a child of her own. However, when she saw me, she said nothing but ran to grab my knife hidden behind a tree. I had no idea how she knew it was there. I immediately grabbed my bow and called her daughter for help. Her daughter, my granddaughter, suspiciously followed me around begging for a response from me like “hey”, “where are your tools” etc. I finally stopped to tell her where my spare knife was, when her mother struck.

As I continued to spectate them, I realised they were probably in a voice call and were in cahoots the whole time. They probably saw the newcomen engine and thought to make a car, thus killing me off so I wouldn’t be in their way.

They kept dying and getting reborn to each other, ignoring other babies.

After a couple of hours, I went back to spectate them again and this time, only one was left. Watching her, I didn’t feel angry anymore. I was consoled by the fact that she barely knew how any of the mechanisms worked. In all this time, the only thing that had changed was that my food supply had completely been depleted, and the place was a mess.

In her final 10 years of life, I watched her fail at many things. She tried for years to pick up a crude piston on a flat rock, but didn’t know how to pick up two items at once. She attempted to cook a stew, and failed horribly (she tried to cut the squash with a sharp stone lol!). She died holding a crock of… squash… 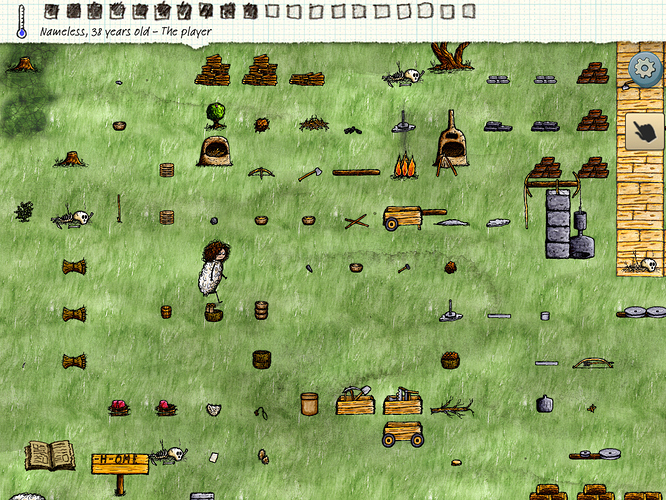 (Sorry I don’t have more photos to illustrate my journey – I was too taken aback by my daughter appearing with a knife and chasing me around!)

Apart from the final betrayal, I had learnt more about the crazy things we can craft and create in this game during this solo adventure than I had in plenty of regular games. I know this goes against the very essence of the game, but I hope one day a (separate) solo mode will be available for us to create our own “home”, like I did mine.

TLDR; had a long solo run, decided to have one baby and that baby called his buddy online to kill me together in the hopes of creating a car. Failed miserably. Solo mode plz?

Don’t worry! You’re not the only one who plays the game like this.

This is why this game is broken…once again…expectations…why is this “not the way the game is supposed to be played”? If ppl dont start facing that the idealization of what this game should be and what it really is are totally diferent things, this game will die and never have a real comunitty…this game is about being resourcefull and agile if you want to survive and achieve anything, and a lot ppl in here think this is a social game where girls have babies and make a familly, its hillarious, but its part of the marketing campaign this game has and it causes a lot of confusion in the english community of the game, and since i started playing this game i seen the worst fights about this or around this topic, and everyone likes to compare how the asian servers are so much better than ours, my bet is that the majority of players there see the game for what it is, a survival, open multyplayer “try to be the biggest mf in town” type of game…not a lets build a big familly and eat pie togheter type of game…and while ppl dont see that, me and you and anyone who wants to be best in this game will just play it alone…

And putting things like this is easy to agree with me i think, but as soon as i try playing with someone else i always have to start a discussion about why we shouldnt have babies…

And thanks for the tip, now i know i shouldnt trust anyone that i dont actually know, really!

i shouldnt trust anyone that i dont actually know, really!

I play solo today, and I didn’t feed any babies, grow berries enough for myself only. after 5 or 6 times born as eve in my saved area, one newbie born as my baby. She want me to teach her how to play, okay, i started to teach her to farm. When another baby born, I didn’t feed her. BUT ! BUT the newbie feed the baby with all the berry. I told them not enough food, and the baby grown up, she tried to kill me with my bow! I have to stay away and wait until all their babies starved and reborn as eve to return my own place. I learnt a lesson that u can’t TRUST ANYONE if you want to play solo. 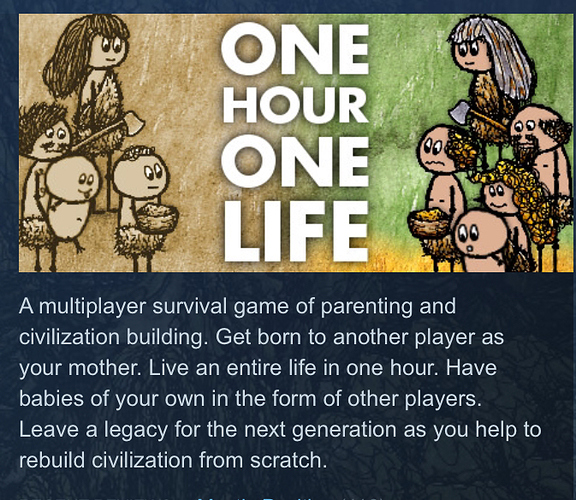 Yeah a solo mode sounds great! I doubt it’ll happen though, because the game mirrors the PC.

I think playing solo run is good for me to practice crafting. I use the tutoring mode to learn how to craft some basic tools and light a fire, and I learn a lot after escaping the tutorial, but I need a place to practice more instead of ruining someone’s camp. I really like to play with others but when u born in a civilized camp and found that u can only help the farm and do nothing, u will soon be bored. Solo run allows me to do things in my own pace. That’s what I think about it, it’s something like the solo challenge, I learn to cook things from that too. Yesterday is my first time to craft knife, no one teach me before and I hope I can build a sheep pen in the future.

Is that suposed to teach me what the game is about? You can see the game how you want and play it how you want, but thats just the way developers which the game was and it became an idealization that everyone new to the game has, play a few games with unknown ppl, get frustrated than we talk

We dont need solo mode…thats why it doesnt exist or does it?

play a few games with unknown ppl, get frustrated than we talk

If you’re frustrated with the game, then you shouldn’t be playing it.

No bro im not, spent a lot of time here asking them to solve the dying of old age eve bug while you probably didnt even knew this game existed, and while they didnt i actually stoped playing for more than a month after buying the game and realising that one of the most important features in the game “wasnt working”, and since i started playing the game and caring about it i only spoke or gave my opinions on the forum with the intent that developers and we community can grow and shape the game and have a better experience overall, so im doing my part, if it wasnt for annoying players like me probably you wouldnt still be able to make solo runs in this game because of the bug, so excuse me if i say what i think in the foruns, if u dont want to simply dont read what i write, but please, if thats the kind of interventions you are able to make in serious topics about this game you are better of somewhere else sticking anything you would like up your ■■■ than here bugging who actually wants to play ohol

Yes! I’ve learnt from playing a lot of solo that once you’ve built a decent place, any kids you have will be tempted to kill you and take over so they wont have to start from scratch… had to learn this lesson the hard way a few times already. Now if i wanna play multiplayer i’d rather get born as a baby in a separate game.

you probably didnt even knew this game existed

I played the PC version.

I highly doubt it.

Cant we all be courteous?

Looks nice, you’ve got alot of items for a small town!
I would never succeed in that , I’d die of boredom by myself.

Seems like someone is the only one who thinks he can be right and everyone else is wrong. I know this type all too well. You’d be better off talking to a wall, WJ.

Then please do play alone. I suspect I’ve run into you before where your way is the ONLY way and the “right” way. Your tirade is full of hypocrisy.

You’d be better off talking to a wall, WJ.

Ummmm, I have played with frustrating randoms. I’ve also played with very useful and fun randoms. I am definitely somewhat biased because I once was that rare, useful random. I get that very few randoms are experienced, and most don’t even want to learn, but I personally think it is worth giving randoms a chance. Realize it is a person (usually a crappy 6 year old, in which case I get your frustration) behind that screen. Also ik that you have played for much longer than me.