I had four sons, two which made me proud. They were Josh and Justin. Josh, I could tell was something special. So much like a wolf caring for his pack. He went out and got a horse for the village, and even rode it. And Justin, he was great too, he tended to the graveyard, making sure that everyone had their final resting place, and making sure that the village didn’t look or smell bad. Both lived past me, and I even got to watch both from heaven.

I actually hope that I get to play with you guys again. I learned a little something from Josh. Yeah he killed two sheep, to get the horse, but it to make a saddle, I guess. Still he impressed me. And Justin was a kind soul. I think, when he spawned to me, I tried to give him my pants, he wouldn’t take it. Lol. Still they were great. 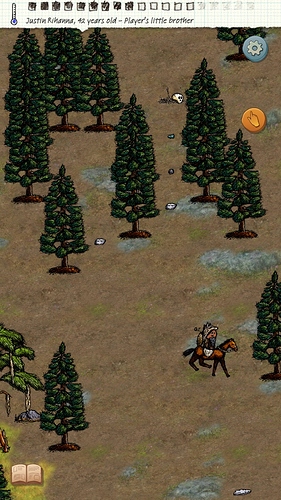 Nice story. It always seems that you can only ever have two children per fertile woman on this game, with the rest running away.

Yeah, we need a solution to the baby suicide problem.

To be honest, I think low server population is the main reason for it. The best solution might be to simply condense all the servers into one of two, and then improve the connectivity of those servers so they can be effectively used from further away. That would mean that what few players there are could actually be able to build something together. The only people that play this version of the game in real numbers are those in Asia, but having all these separate servers means that nobody who isn’t in Japan can really play. Even with servers of latency below 50 the game is rather laggy.

I think a lot of baby suicides are people trying to get back to their Eve camps or trying to get reborn into the same family line.

I realize that we are supposed to just accept that that’s how the game was meant to be played, where we have no control over where we are born or to whom we are born. But there is no denying that people enjoy seeing the progress of one town.

If we had more peeps, we would have no need of Eve towns. A settlement would be able to keep going simply by having children.

Try not to go off topic too much, maybe make a new post about baby suicide.