Long Lived Long Lindsey is what I like to say. Last night, despite choosing a us server and English as my language, I was born to a Japanese mother. Thank fully she did speak a little bit of English and she asked me my name. I said, “It is long” she was quite confused however, she thought my name was actually long and not that I had a long name (plus I’m a girl and my name didn’t seem very fitting for my character). She asked if my name was Long and I said sure. I thought it would be kinda funny to have that as my name. I had a few brothers and one sister, all of which died for some reason, except for me and one of my brothers (he had a Japanese name so I can’t say his name). The village was a bit more advanced than most, I think my mom actually spawned here rather than built it, but I don’t know for sure. What they didn’t have was iron. Thankfully the rock biomes were nearby and brimming with iron (at least as brimming as they could be), I even found a vein! I used the iron to make loads of tools, including a knife. I ended up giving the knife to my brother to kill the snakes that were bothering me. To my surprise (but also kinda not) this was his first time ever doing so and he seems very proud. Unfortunately he did die practically right after though. I buried him and put the snakeskin boots and knife at his grave. I spent my last few minutes trying to make and ‘E’ to put next to my pickaxe and stanchion kit (saying the vein was east) but I died of old age before that. I say it was a great life and if I ever go there again, I’ll get sheep and make a road to the vein. Here’s my family tree screenshot as well, to my left is my brother who killed the snakes, to my right is my unsuccessful sister. 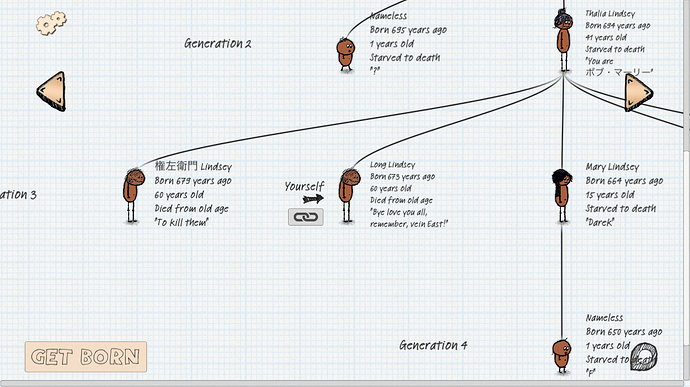 I have another story to share.
This one is on the ip-beginner server, as I was looking to not be an eve this time. I got my wish (kinda)

I call this story - Alan and the ‘Eve’

I was born as Alan Applegate Rose. I grew up in a desert with my brothers and sisters, but we had no base, however the area we lived in could not have been better. Everything and I mean everything was close by, rabbits, desert, snow, food, water, iron, gold, etc. One I started building the base though, I noticed a small little child wandering around, she wasn’t old enough to feed herself yet. That’s when I realized I hadn’t seen any of my family for quite a while. I knew she was the last girl, so I saved her by feeding her berries. I was very worried that she would die and everything would be lost, but she actually pulled through and survived (I mean, there was tons of food, what would go wrong anyway!?). She had a very big family and everything was just perfect. The town had a perfect location and the numbers of people were looking pretty good. It felt strange to have created a city as a male, and have someone else be the ‘Eve’ (even though she was not an eve). I truly did love this town and life, maybe someone will spawn there, who knows. The Rose family lasted 6 generations, which would be around midnight where I live, so I guess it’s understandable to have no players then, but it still made me sad to see all that wasted potential. Alas, my final words still hold true, “I’m glad I saved you sis”