I began as an Eve, and took a long time trying to find a village. I came upon an empty town and started to continue. I had a daughter that I named Jess. She was a good daughter.
Then I had two sons, Sam and Ty. As I was nurturing Ty in the nursery, and Sam just being 3 yo, I noticed the knife we kept there was gone. I thought maybe someone was butchering animals. After all, my kids are good.
Sam came running in with a wound. I patched him back up, nothing was mentioned as to what happened, so I assumed it was an accident.
Then Jess came in with a knife, in a nurse uniform, and stabbed Ty. I screamed and she left. I patched up my son while crying. Something had to be done.
Ty ran with me to the bow and arrow, and I had to hunt down my only daughter.
We came upon each other at the bushes. She swiped at me with the knife. I shot my bow and arrow with a miss. She came at me again, another miss. Then I shot the fatal arrow into my daughter’s heart, as mine broke.
Good fight, she said.
I didn’t know what to say, and just stared at the blood on my hands. This can’t happen again, I thought to myself. She died in my arms. As her bones lay bare, I run to my son’s to tell them. They cheered as I felt a hole in my heart. I spent the rest of my life researching locksmithing, until I made a lock and key.
I knew my end was coming. I had it, the lock and key, but no, the end was coming too quick. I tried to stay alive, as I told my son’s the contents of my backpack.
Then it all went black. I hope they could finish what I started and make the village a safer place.
Hopefully an Eve will wander in… 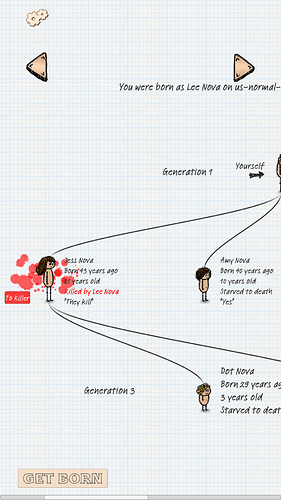 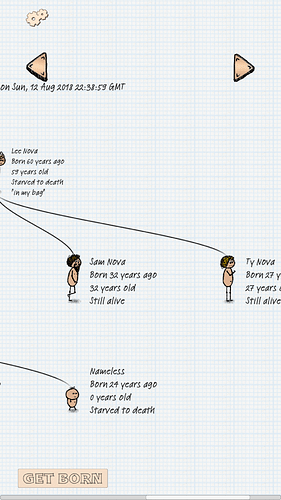 I was your kid ty. I have finished your lock and have locked the knife away. Since this was my orignal city the bell tower city i know theres 4 knives in total running around but i locked one up and hid the key. Thank u mom for saving me when i tried to warn u what has happened.

I distroyed one of the knife a couple days ago. I found it behind a tree, and a made a trash hole and dumped it on it. That was in the bell city.

Ok thats one. I think i know where another one is. When i find bell tower city then ill go lock the second one up. Btw the locked chest contains knives and a arrow. So if u catch someone trying break into it be weary

There has been a server whipe.

There has been a server whipe.

No, the worlds are still there. Which server are you thinking of?

Us server 1. Oh i was in us server 3. Id it the same map every server?? Cause i found two locations where i built a decent city with a pen and i manage to return to the area and it was empty

Us server 1. Oh i was in us server 3. Id it the same map every server?? Cause i found two locations where i built a decent city with a pen and i manage to return to the area and it was empty

I think we copied some databases between servers in the beginning, so the explored areas would have looked the same. We did this so you guys didn’t have to start over all the time, and it’s not all the servers.

There is a trick you should apply to make it work through the forum: Don’t let the hyperlink start at a new line, because the forum will then try to do “something smart” with it which actually breaks it down. Just put a space at the start of a new line then follow the link. That should work.

The link doesn’t go to a specific page or anything anyway.

The link doesn’t go to a specific page or anything anyway.

I edited your posts. Try now.
When you put a link alone on a line, the forum engine will try to pull in the contents of the link. To avoid this, you simply write something more on the same line (in this case a space character at the very beginning)

Chistoffer i got an idea about the worms.how about you can use the worms on an empty soil plot after it been dug and use them to regrow soil over time. The pit must be emptied of worms first and sit for 20-30 min with 6 worms in it to regrow soil. I think it would work since worms make furtile soil in real life. For the worms i think only some pits will have few worms in each like 3 so they would need to gather worms. Please let me know if you like the idea

Maybe make the empty soil pit randomly have 0-3 worms in it to be harvested.