Mr.@Christoffer:
To be honest, I have a pessimistic view of your proposed mechanism. In my opinion,this method can only solve the problem for a while：
You can give the player a cooldown after killing the sheep today, you’ll give more tomorrow, and everything will be dangerous in the end. I’m not saying it’s a bad mechanism, but it’s clearly not the best. So I want to offer a new perspective: what do you think would happen if griefers became a challenge? As you said, the griefers always have an advantage over the regular player, so I want to give the good people a powerful weapon: Forced UserName, which I wrote about in my post, （but not many people seem to read）, so I’ll give them a quick overview here:
Forced UsedName，we call it FUN for short, is intended to bring some fun.It mean everyone will get a unique name.At first,it’s hidden,but eve can know that. After she died, her children can use her bone to build a altar,so that they could gain eve’s power and provide eve with an opportunity to be born again.That means when they find a potential griefer, they can choose to abandonhim or keep him, and if we keep him, we can keep an eye on him,That lessens his chances of committing another crime, because he knows we’re on guard.
I think with this mechanism, we’re good enough to fight with the griefers, and more importantly, the bad guys can’t use this mechanism.

@Transpare i believe that some things should have delays such as the things i pointed out above. But i can understand your point. It could very quickly get out of hand as more timers are added.

I believe this will be an essential part in preventing griefing in the future but it wont work if its the only thing implemented.

It would be a bit anoying for some players that are quick and fix it alls. I can imagine it will be similar to imput lag which i absolutely hate but it seems necissary to me

Thanks! Thanks for your reply，i think i should think more.By the way，for your third paragraph,
do you think it would be better if we only had to raise a child until the age of three（whether or not he helped you build the altar）but we can still be reborn（reborn at the bone，then the bone disappears）？That means we just need spend 3 minutes with the kid，and then you are free.

Have you considered if no player join when you would play this games, so you can not rebron again. I know this situation, because I always catch this.

How about add a property on the ‘dangerous’ tools with ‘owner’. For instance, tool.owner: axe.owner= Chris; knife.owner=Heidi.
And the owner can pass the authority to whom he/she wanted.
I’m not sure if it is feasible for the code, as i’ve only checked eve’s respawn law on the Github.

Well we already have a respawn mechanism if you build a homemarker with a lilypad from the peace lilly pet but it requires you to be burried.

So i think a eve specific alter or rather shrine which would be much easier to build would be a nice feature as a bonuse for players to want to be eves.

I dont think it would be a good idea for the eve or mom to be able to just spawn back at their bones if a baby didnt help with the alter because griefers could easily use that mechanic to grief towns. (Like building the alter behind a tree etc.)

That seems like a cool idea actually though i dont know if its feasiable. It would help keep griefers from killing all the sheep but creative griefers could just make a new knife or bow and arrow.

As long as there is a file already availiable a knife is one of the easiest things to make in the game.

LOL…Griefers also can use these names

I mean not the ‘name’ but the ‘player’, as i remembered each player could be a obj in the code?

That’s true, if the griefers are too ambitious to destroy, they could make up the tools by themselves.

Then pass the authority to whom you trust. Of course, 100% Utopia seems impossible in both this game and our society.

Help us make griefing harder to do / 荒らし行為を難しくするお手伝い募集

because griefers could easily use that mechanic to grief towns. (Like building the alter behind a tree etc.)

Exactly，but with the passage of time, the problem will be solved naturally, because everyone will know a little griefers（by FUN）.
And…here’s another question，how to get through this transition.Oops, I never thought about it，thank

Did you mean there’s no one on your family tree but you?If so, it’s handled the same way, reborn where you died, but without the condition of a three-year-old.

I think theyre talking about the recently added mechanic where if bones are burried you can respawn at your homemarker.

Im assuming they play on one of the three low pop servers like us1 eu2 or singapore.

Wait a minute, if he’s not talking about my mechanics, why is his post here?
LoL

Let me get this straight.
Only eve could see the FUN? And if we build an altar from eve bones, we could see FUN too?

you need put some food at the altar,and burn it，here I want to introduce a tagging system，hhis allows you to tag up to five people.And then you pick a person that you’ve tagged.Here’s more information. 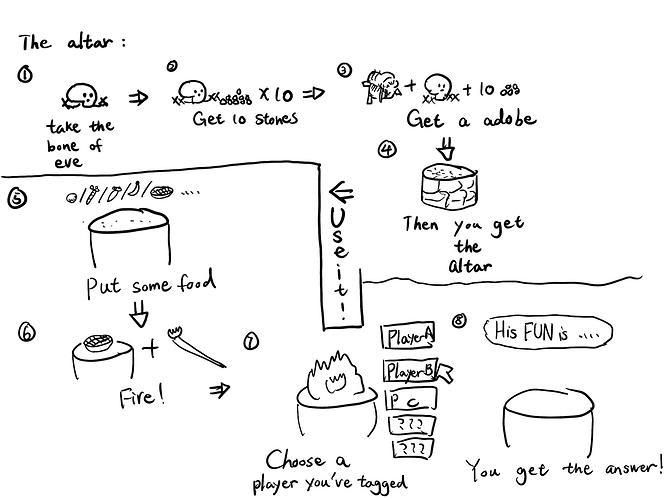