There’s a lot of suspicious person grieving potential, especially the one who trying to make a knife. I was old lady, so i decided to wondering in badlands looking for iron. I bring home 6 iron wrought (which is weird because i use to die while looking for iron).

Luckily, we have sheriff in town with his bow and wolf hat. His my brother and he’s ready to shoot any griever. Then, there’s this one person (my grandson).

It’s time for my village have its own stall so i want to build one before i die of an old age. We don’t have adze so i want to make one. We have a lot of iron wrought but only one iron ingot left. I pick it up from the bowl put it down on the ground. Suddenly, this boy grab it and put it in his bag. I asked him “what do you make?”, he said “i need plates”. So, i point out the stack of plates in front of us. “no. Iron plates” he said. I run to the berries farm because I was old and need to eat often.

“iron plates?” i asked while running in front of sheriff which makes him curious too. “never heard of it before” i said.
“sorry. I’m Japanese. My English is bad” he said. And then he turn on the klin, drew out his iron ingot and makes a steel blade blank. And that moment i knew he was going to make a knife. Why he wanted to make a knife? We don’t have snakes around or sheep yet.

I told the sheriff, the sheriff realized it too. But the guy running to North with his sharp steel blade. I was old so i can’t help much so the sheriff went looking for him, while I’m trying to make adze for the stall. Sheriff was running around the camp looking for him but he’s nowhere to be found.

I died of an old age. Fail trying to build the stall. And then i curious where that guy hiding? So i click on observation mode. There i see him lost. He didn’t marked his home so he’s lost somewhere. In his bag i can see the knife. And he’s died because a boar.

We’re not really sure what he’s trying to do with the knife but we believe it wasn’t a good thing. 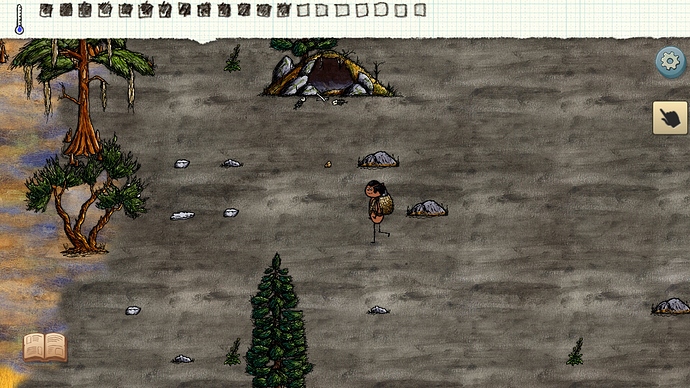