The Coma Of My Kids

I had a good life. My name was bacon and I had a loving mother. I had many kids, named Ketchup, Apple, Tree, Banana, Paprika, Mustard, and Rosey Toes. Tree, Mustard, and Banana ran away. Later I found that they had died in the wilderness. Apple and Ketchup grew to be strong helpers to the community. And then I had Paprika. From the moment he was born, he did not move a muscle. He was afk the entire time I played. But I kept him alive. After I could no longer breastfeed him, I ran to get gooseberries and ran back to feed them to him. And I continued that cycle for a long time. And then I had Rosey Toes. At first, she was normal. But at the age of three, she was stolen from me by my own niece. I looked everywhere for her, and found her, afk, at age seven, right next to Paprika. I ran back and forth, feeding them berries so they wouldn’t die. It was quite tragic, almost as if they were in a coma. I kept feeding them and hoping for them to wake up, but they never did. Eventually, Rosey Toes was old enough to have children, and I had to take care of those too because she was afk. It was hard to feed all her children, name them, and keep both Paprika and Rosey Toes alive at the same time. My grandchildren were Poptart, Bacon II, Steak, and Lamb Chop. I loved them dearly. I was getting closer to death, but I kept feeding my children and grandchildren to the very end. Rosey Toes lived to be 27. Paprika lived to 38. They died of starvation. Both of those children would have been dead as toddlers if I did not constantly feed them during the game, hoping and hoping they would wake up. This is Rosey Toes and Paprika near the very end. 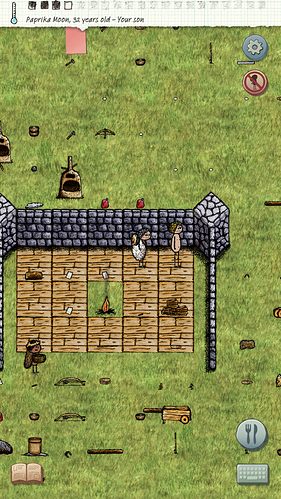 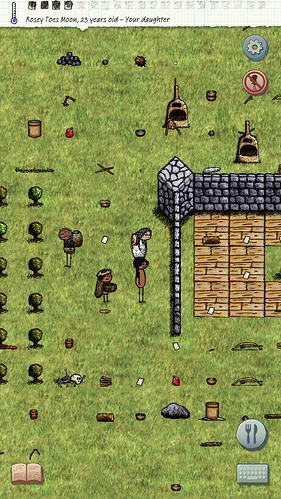 I love how Rosey Toes is just staring at a wall.