I was born in the wild, to an eve. I was named Tarzan almost immediately. In my limited baby speech, I asked “Y.” My mother said, “because we live in the wild.” I was a bit confused but didn’t question it too much. My mom carried me around through my first year, feeding me and caring for me. Then, we found a desert. My mom explored it a little and then dropped me onto a rattlesnake after a half-hearted “sorry.” I was nearly bitten but managed to escape. My mom started trying to pick me up to try and kill me again, but I started running away as fast as my little legs could carry me. I managed to lose her and tried to find food that I could eat when I became three (I was only two at the time, so couldn’t hold anything yet). Then, I came across a huge village with more than fifteen people living in it. An old lady greeted me and gave me food and shelter, and when I tapped on her, I found out that she was my grandmother. My mother wasn’t an eve at all! She had probably ran away from the town and became a rouge. When I became four, one of the townspeople came up to me to give me my life job. She looked at me dead in the eyes and said, “You will be the gravedigger.” Confused, I wondered if that was all my life was worth. But if I was going to be a gravedigger, I was going to be the best gravedigger there was. I saw that there was a small graveyard above the town and immediately looked for a basket. From the moment I knew my fate at an early four years old, I was ready to fulfill it. For around twenty years, my life consisted of finding bones and carrying them back to the graveyard, then burying them with a shovel. I only stopped my work when I needed to eat. I saw countless family members die. My grandmother, my nameless niece, dozens of children who weren’t fed and tens of elders whose time had come. After a while, my graveyard started spilling into the town, as there wasn’t enough space in the original area. I realized that though they were buried, there were no tombstones for them. So I looked far and wide until I found some flat rocks, but they were really, really far away from the village. For years and years I just carried tombstones back and forth through several lands, including a marsh where I got yellow fever accidentally more than once. I could usually make it back to the village and get food before I died, but one time I only had one square left of food and I got sick. I sprinted back to the village and my niece, Josie, fed me berries until I was better. Thank you, Josie, if you’re reading this. I managed to survive and brought back seven tombstones in total. I was maybe forty-five years old by then, and was hoping to maybe take a break from my hard work. But during the time I was getting the tombstones, a lot more people had died and the town needed me to fulfill my destiny. I brought back grave after grave. Family member after family member that I had saw die. And then, my phone went flat. In real life, I freaked out. I wasn’t done yet! The town needed me! I scrambled for a charger and plugged it in, then waited frantically for my phone to turn on. I yeeted in the password and opened the app as fast as I could, and I saw my character, Tarzan gotem, with the words “Still Alive” next to it. I pressed play and my character loaded back into view, in the same spot it was before, but with a lot less hunger. I was so relieved that I could continue my work. Even more had died in my short absence, so I started my work once again. There was once a time when I went out to get a grave quite far from my village, and when I came back, every single one of my tombstones were gone. I had spent so long getting them and I was heartbroken. Clearly, the townspeople didn’t appreciate how much work I was doing with the tombs. The next time I used the road, it was a lot longer than it was before. Around seven squares longer. I was sad that my tombstones were used for the stone path, but hopefully it made the road users happy. When I was fifty-eight, I realized my time was almost over, and opened a space in my graveyard where I would stand once my time was also up. I would be there when I died, right in the middle of my life’s work. But before I passed, I counted every single one of the graves I had made. I had made thirty-seven. Thirty-seven graves was my life work. And then I passed away.

(Photo of me in the graveyard. Not all graves are shown.) 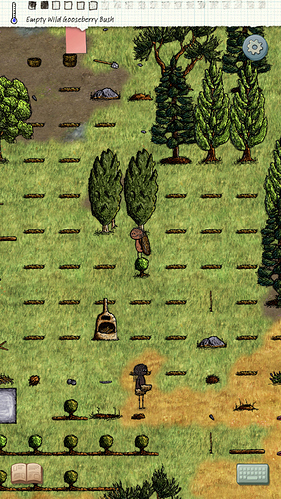 Kind of messy, but grand nonetheless!

When you put tombstone, the grave becomes permanent. It will not decay, thus will eat more space. I usually only use tombstone on important people, like the first eve, or someone very helpful to the village. Also, I don’t like digging corpses, the shovel will broke. It’s okay if we have many iron home, but not okay if there’s not enough iron.

I used an already broken shovel for all the grave digging. Idk why it works if it’s broken… it seems to work if it’s broken on graves but not on anything else (as far as I’m aware). Not sure why; maybe it’s a bug. Also yeah I guess it does become permanent but I wanted to make a nice graveyard, and it was in a place that wasn’t too much in the way of the town so I figured it was okay. The only things there were a few old, dead berry bushes (there was a much larger farm further down) and an abandoned adobe stove thing that nobody used the entire time I was alive. If it was in the middle of the town I would also be annoyed with it.

Hey I had the same mother she didn’t name but she gave me to a snake when I died I saw she had a family and she wasn’t alone.